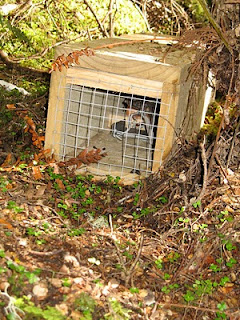 [a stoat trap along NZ's Kepler Track. Click on the image and see if you can see the deceased stoat inside!]


[A cautionary tale from across the Tasman Sea]

It is not an altogether pleasant experience to be woken by mice scurrying over your face. The unpleasantness increases when the wider implications of a mouse plague in remote New Zealand are understood.
It’s spring 2006, and we are on our first serious tramp in the South Island of New Zealand. Our overnight stay in Aspiring Hut is very early in the season, just days after the hut has been fully opened.
2006 is a beech mast year – meaning that the various species of southern beech that dominate the forests of New Zealand are seeding prolifically. That’s good for the future of these beautiful forests, so reminiscent of Tasmania’s myrtle forests (to which they are related). But it’s also good for anything that will eat the seeds, and this year that’s conjured up a vast multitude of mice.
In, under and around Aspiring Hut hordes of mice have seen out the winter. With the thaw and the longer days they’re breeding and feeding at a frantic rate. Hence the early morning tip-toeing across my beard. Later, when we walk the Routeburn Track, the forest floor is alive with mice. In my peripheral vision the forest floor seems to undulate as mice scurry to hide from the passing bipedal “giants”. Afterwards they will return to the beech feast.
I used to count Australia the world champion in the field of introduced pest species. Eric Rolls’ 1969 classic book They All Ran Wild examines the lamentable record of our inadvertant rape and pillage of the environment via introduced furry, hard-hoofed, leafy and prickly living things.
“Inadvertant” may be too kind, given that Australia had acclimatisation societies in the 19th century that aimed specifically and deliberately to introduce and establish plants and animals in this country. Their goal was partly economic, but they were also trying to make this “new world” look and feel more like the old. The founder of the Victorian Acclimatisation Society, Edward Wilson, went so far as to state “if it lives, we want it”.

But after my 2006 experience, and bearing in mind the spirit of trans-Tasman rivalry, I have to concede that New Zealand may be even more over-run by feral species than we are. And not just by mice. The food chain doesn’t end with the small rodents. Rats eat mice, and when mice are scarce then birds and bird eggs will do fine. In turn well-fed rats are fine food for mustelid predators such as stoats.
And when stoats can’t get rat? Well, while walking the Kepler Track in the mountains west of Te Anau, I found the sad answer. At the time I was struggling to find my walking rhythm. At such times I resort to tricks that help distract my mind and body. On the Kepler I used a series of pink triangles nailed at intervals along the track as both a distraction and a crude tally of my progress.
Of course the tags also piqued my curiosity. Hitler had sewn pink triangles onto the clothes of male homosexual prisoners. In this case the tags marked the location of stoat traps. And I learned that what stoats turn to when rats become scarce is birds. And what better than the fat and flightless takahe.
So the intensive trapping effort along the Kepler Track was aimed specifically at giving the dwindling population of takahe in the nearby Murchison Mountains a chance at increasing its perilous grip on what was once its stronghold.
The takahe (Porphyrio hochstetteri) is a large, strikingly-coloured bird believed to be descended from wind-blown Australian birds (similar to swamp-hens). Several million years in isolation has left them flightless and large - they weigh around 3kg. That’s fine in an environment virtually free of carnivorous predators, but disastrous when killing machines such as stoats are added to the mix.
By the end of the 19th century, takahe were believed extinct. Then in 1948 a small number was found in the mountains across the lake from where we were walking. After huge breeding and trapping efforts, the total population is currently around 220 individual birds.
By the end of the 3 day walk I had counted over 120 trap markers. The traps themselves were mostly well hidden. However near the end of the walk I wandered off track near a marker to see what a trap looked like. Built to be accessible to mustelids rather than men, getting close to the wood and mesh box was difficult.
I lined my camera up near the cage and shot off a speculative photo – without actually being able to see through the view finder. To my surprise, weeks later, I discovered that I had photographed a dead stoat inside the trap? It was only after zooming in on the image that I made out the twisted and grisled stoat corpse (see image above).
On learning from Department of Conservation (DoC) rangers a little more of the story, my curiosity about stoats soon turned to anger. They were introduced to New Zealand in the 1880s in an attempt to keep rabbit numbers low. At the time there was strong scientific and political opposition, as even then the likely effects on non-target species was predicted. However the powerful farming lobby won the day, and New Zealand’s fauna – and its tax payers – have been paying a high price ever since.
Despite a number of similarly sad New Zealand stories, a Tasmanian like myself steers well clear of the high horse. The extinction of the thylacine here is tragedy enough; the “export” of Tasmanian possums to New Zealand terrible. But the deliberate 21st century introduction of the European fox into the world’s only stronghold of carnivorous marsupials? Take me to the hair shirt and flagellation whip!
Posted by Nature Scribe at 15:38

Another Grant awoken by something strange running across his face...So, are you now afraid of mice, Dad? Perhaps only their effects on native animals.

An interesting and (again) moving piece.

Great story but a sad tale! If only we could have the 'Cat in the Hat' to remove the pink icing (feral pests) with cat A B C D E ...... X Y & Z. Sadly we have used this fantasy Seuss method and failed nature!
Loved the reminder of Kepler/ Routburn walks - more in Sept??