Black and White and Heard All Over 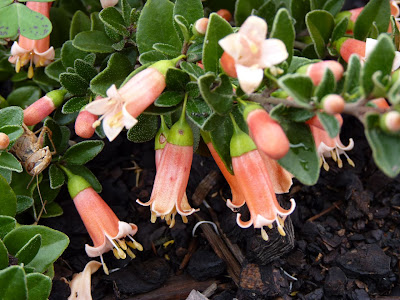 [spot the locust hiding in the correa bush - you may need to click on the image to enlarge it. Photo by Lynne Grant.]
[back to the birds, this time exploring feast and famine in the avian world]
If there aren’t enough things in this world to break your heart, try paying close attention to the call of the Australian magpie (Cracticus tibicen). Perhaps because they are only occasional visitors to my bushland, I can never get enough of their superbly yearning voice. Bird authorities variously describe it as flute-like, warbling, piping, carolling and chorusing. Their species name tibicen reflects this, being Latin for piper or flute-player.
Different subspecies of magpie are found in every state and territory, making them one of our most widely recognised birds – both visually and aurally. Magpies were also introduced to New Zealand in the 1860s and now, despite concerns about their ecological effects, they have become established in the popular imagination over there. Murray Ball’s hugely successful Kiwi cartoon series Footrot Flats has an Australian magpie character named Pew. Also famous across the Tasman is NZ poet Denis Glover’s widely known poem The Magpies. Its chorus captures some of the bird’s melodic dexterity.
And Quardle oodle ardle wardle doodle/The magpies said
An Easter visit to Bendigo in central Victoria reacquainted me with the glories of the magpie’s call. After a good spring and summer, with drought-breaking rains and milder temperatures, everything in the iron-bark country seemed to be sighing contentedly, including the magpies. Their morning and evening calling was one of the highlights of the early part of Easter.
Less happily the spring and summer conditions had also encouraged the proliferation of plague locusts (Chortoicetes terminifera). A wave of locusts hit central Victoria over Easter. Our daily walks soon took on a strangely percussive character, as masses of locusts clicked and flicked and fluttered around us as we strolled by. Cars had less chance of avoiding this invertebrate Mexican wave, and the roads – and car grills – were spattered with locust gore.
But where there’s a surplus of food there will be diners. We once lived through a locust plague in central-western NSW, and found that our chickens were very happy to free-range on the hoppers. We learned the hard way that locusts taint eggs, making them extremely unappealing. But around Bendigo the job was done just as effectively – and with no culinary after-effects – by squadrons of magpies.
Actually the collective name for them is a tiding of magpies, and for the magpies these were good tidings. Everywhere the locusts hopped and flew, they were followed by magpies, as well as blackbirds, Indian mynahs and many other species, introduced or otherwise. The birds grew visibly fat and wobbly, expending little effort to gain a day’s worth of food in minutes.
By the end of Easter we noticed one strange side effect. There was a distinct reduction in the amount of audible Magpie song. It was as if the maggies had consumed a huge Christmas feast: far too much food and drink to expect them to sing any more carols. It was a wonder some of them could still fly.
Posted by Nature Scribe at 16:17

Lovely article, lovely Easter!
Is it a measure of nature that a bird with such a musical, joyful call has no colour (in its feathers)? As if all creativity was spent on its warble? Though I'm sure there is an argument for the strong statement of black and white. (Not sure how the dull brown, foul smelling, voracious and pesty locust came to inherit its genes - but I guess they had their uses for God and Moses and John the Baptist? As for me, I'll stick to wild honey and maggies!)