Chamonix, Zermatt, Grindelwald, Mt Field. To borrow from Sesame Street, one of these things is not like the others. Yes, they are all associated with snow, and with skiing. But the similarities end there.

After returning from the grandeur of the French and Swiss Alps, you’d hardly be surprised if I raised a condescending smile at the mention of Tasmania’s snow, and the modest mountains – like Mt Field – that occasionally wear enough of it for skiing.

Still Mt Field is where I find myself when duty calls after some late season snow. I’m part of a group of about ten volunteers rostered on to run the tow and provide a ski patrol for the Mt Mawson run. We arrive early on a frosty and clear Saturday morning, stump up the “jeep track” from Lake Dobson, and are well-warmed even before the work starts.

The rope tow is a device that owes more to Heath Robinson than any 21st – or even the 20th – century technology. It comprises several hundred metres of thick rope; a set of poles, pulleys and wheels; more hundreds of metres of electricals; a few safety switches and a diesel powered engine/generator housed in a shed.

At times you run it literally: running from the generator shed to the stop buttons; from there to the top gate; from that to the ticket and belt-issue hut. In between there’s a lot of standing around, lending half an ear to any changes in the engine’s chugging; monitoring the occasional belch of soot; checking that skiers and snow-boarders aren’t getting tangled up anywhere. 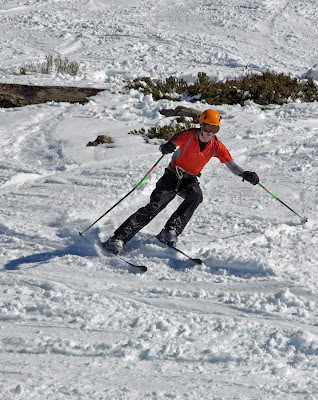 The whole thing is a little like a men’s shed, but spread horizontally up the mountain. We volunteers are soon all on first name terms, sharing stories as well as tasks. We also get to know more than half of the skiers by name (there are only 30 or so). It’s my first time on tow duty, and the village feel and the all-in involvement is nothing like any ski resort I’ve ever been to. It’s certainly a million miles away from the slick hustle of somewhere like Zermatt, with its dozens of gondolas and cable cars; its high-altitude hotels; its thousands of visitors – even in summer.

After a few hours of dutiful running and standing around, I take some time out and wander with my camera into the backcountry. Wander doesn’t really convey it. It’s more of a giraffe stalk, legs lifting high in a vain attempt not to post-hole. The already insubstantial snow is softening in the warm sun, and every second step finds me up to my thighs in snow.

Uphill is clearly not the way to go, so I try heading down and across the slope. Perhaps momentum and speed may allow me to glide across the surface like an elf. Immediately I fall into a waist deep drift, more legless than Legolas, and have to twist and roll sideways to extricate myself. Clearly without skis – or the snow-shoes that Tim remembered he’d forgotten about twenty minutes into our drive up – I’m not going very far.

I settle for what’s within easy reach, glad to be far enough from the ski tow that I can’t hear the burble of its engine. Snow, smooth and untrammelled lies silent between, against and around dolerite boulders. Snow gums and prickly bushes sprout clear of the snow, contrasting starkly. The sun angles down from a brilliantly blue sky, kissing the snow’s skin. There’s grandeur too in small scenes. 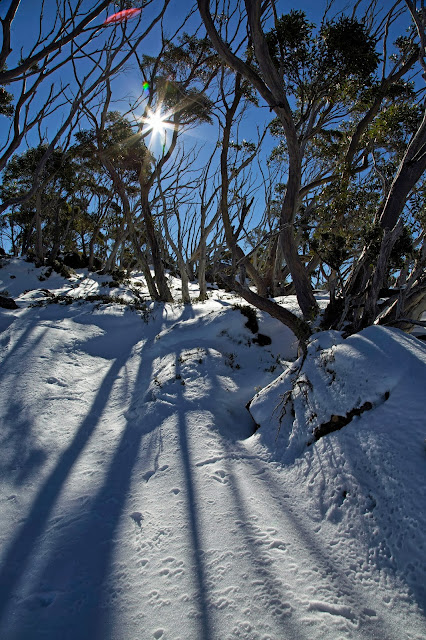 Posted by Nature Scribe at 13:05 No comments:

What's Age Got To Do With It?

You could say that it started the moment I set eyes on the Matterhorn, but that wouldn’t be completely true. Rather that perfect “child’s mountain” stirred mountain memories, mountain longings, that I’ve always carried. After all I was partly here in the Alps to give free rein to that love of mountains, a perfect way for a mountain lover to celebrate 60 years on earth.

Not that I had come expecting to suddenly strap on alpine gear and climb any of these mountains. It wasn’t that sort of holiday, and besides I felt I’d left it a bit late to suddenly become a “real” mountain climber. No, it would be good enough just to be out among these wonders. That is until I got close up to my first “horn”.

The Matterhorn (“peak in the meadows”, 4478m) wouldn’t be anyone’s idea of where to start climbing. But in trying to get a good look at it, my friend Chris and I went up the gondolas and cable cars to Klein Matterhorn (3883m). From there, when the Matterhorn wasn’t dragging our eyes its way, we couldn’t help noticing a snow-covered, hunched, humble-looking summit nearby.

Breithorn (“large peak”, 4164m) is easily enough climbed from Klein Matterhorn. That’s IF you have all the right gear, and (preferably) go with a guided group. We were prepared for neither, so could only stand and watch and drool, as long lines of cramponed, roped and guided walkers trudged through deep snow – a retreat from Leningrad in reverse – on their way to the summit.

The day was calm, warm(ish) and blue-skied: perfect. I looked over at Chris with the strongest of “if only” looks, then back at the line of lucky summiteers. Here was an achievable 4000m + horn, a gently sloping, snowy dome with dramatic cornices and drop-offs safely to one side. On a day like this it looked so straightforward that my regrets kept piling up.

We turned and went down to the ground level and wandered out onto the snow, vaguely in Breithorn’s direction. Seventy, maybe eighty metres out into the snow convinced us that light hiking shoes and a rainjacket were never going to get us anywhere. Apart from the difficulties of the snow, we were close to 4000m in altitude. Even during this brief excursion our breathing was a little laboured. We were simply unprepared for anything but longing looks.

That afternoon, back in Zermatt, Lynne and I wandered into the Matterhorn Museum. In the back of my mind I was counter-rationalising my desire to summit Breithorn. We were travelling with a family, including small children, so summiting mountains was never going to be high on the agenda. And really, in the shadows of my 60th birthday, wasn’t I getting a little beyond the kinds of adventures that had got me to the top of Tasmania’s intimidating Federation Peak?

Then Lynne pointed to a picture on the museum’s wall of an ageing Zermatt guide, Ulrich Inderbinen (1900 – 2004). In stunned silence I read the caption. Inderbinen had worked here as a mountain guide until the age of 95. He had summited the Matterhorn more than 370 times, the last time when he was 90. Surely this was a superman! And then I read a summary of his philosophy.

I live how I climb a mountain: my walking rhythm is slow and deliberate, but steady and determined.

Both inspired and chastised by Ulrich, I began to seek out summit possibilities. Our next chance came in the Bettmeralp a few days later, where we frustratingly missed out on summiting Bettmerhorn (2872m). Tantalisingly close to the top, the summit track was closed due to hazardous snow and ice conditions.

Our third chance – and perhaps our last – came during a wander above Grindelwald to the beautiful alpine lake called Bachalpsee. The weather forecast, and the bushman’s barometer (a good look around), both indicated that the afternoon was likely to see rain and possibly thunder. We all lunched by the lake, enjoying the peace of the place. But there was little doubt Chris and I had half an eye on the swirling clouds, and the mountains they draped with varying resolve.

Of the two mountains under consideration, only one had a horn in its name. So naturally Reeti (2757m) was overlooked in favour of Faulhorn (“rotten peak”, 2681m). By the end of lunch we’d decided we’d “go up and have a look”. That was really code for “get to the top of the bloody thing come hell or high water!”

Despite the concession that this was legitimate “boys’ time”, it felt terribly old-fashioned, and not a little selfish, to farewell the women and children and start the ascent. Late snow was still thick and tricky in parts, and the climb was a little relentless. But in truth for the most part it wa a “hands-in-pockets” walk. The track was wide and easy to follow, and we only required a modicum of Ulrich’s “steady and determined” approach to top out on Faulhorn.

On the summit I had mixed feelings. I was a little elated at being on top of a Swiss mountain. And glad that the clouds had parted enough for us to see mountains in every direction. On the other hand there was a hotel here! This being the Alps I was not completely surprised. But what did take me aback was that all guests – and there were more than a dozen of us – had to walk there, as there’s no vehicular track and no gondola access.

After taking in the views, we celebrated with a coffee and cake. It may have been a very small horn, but it was a horn nonetheless. It certainly didn’t deserve its “rotten peak” moniker. As we descended the years seemed to melt away. We were soon boot-skiing, yahooing and rainjacket-tobogganing our way down the snow slabs, much to the surprise of a sedate Swiss party. Perhaps it was Ulrich Inderbinen’s example spurring us on. I can only hope I’ll be as frisky in 30 years time.