Our second section of the Otago Central Rail Trail must be brought to us by the letter 'O', as today's ride takes us from Omakau to Oturehua. Of course that's after we've checked out Ophir, an old mining town a few km off the trail near Omakau.

Our start is sedate: we now have our sister-in-law doing her first day with us. In fact it's her first full day on a bike since she was a girl. Besides, there's a cafe near Lauder, just 9km up the track, and we have a tradition to uphold.

The weather has turned fairer, clouds giving way to patches of blue. We feel small in the wide open green of Central Otago, with its backdrop of snow-capped, cloud-topped ranges. In summer this place can bake, drying to dusty, pale stubble fields. In winter it can be killing cold, with frosts and snows that might freeze unprotected sheep solid. But we're here in spring, a gentle one too, and the fields are green and amply dotted with sheep. As we cycle past we occasionally spook a ewe with new lambs. She bleats a warning, and the lambs rush for the shelter beneath, butting hard at her udders. Connection made they vigorously wiggle their long tails as though to turn up the volume.

Scenes like this are part of the allure of slower travel. At walking or cycling pace you get to see, smell, hear, feel and more fully take in your surroundings. It sounds simple, yet the experience of it is much more profound than the saying of it. For me at least there is a small exchange at the soul level. Whether a part of me is left in the lambing fields of Otago, or a part of that place has entered me, I am not sure. Perhaps it’s a bit of both.

After Lauder we cross an iron and stone bridge over the Manuherikia River, and climb gradually towards the Poolburn Gorge. We've been told this is one of the most spectacular sections of the OCRT, with long tunnels, a steep gorge and the impressive Poolburn Viaduct. We've planned to meet my sister at the viaduct, although there’s talk of her trying to walk in and meet us at one of the tunnels.

The climb is easy enough without wind, and we soon reach the first tunnel. Before going through, a few of us drop bikes and walk off to explore the former tunnel builders' camp. We marvel at the hardiness of these labourers, living for years on these prodigiously steep slopes above the river. What to us is a spectacle was to them a living trial; doing hard physical work sometimes in burning heat, often in ferocious cold, always on menacingly steep slopes. A couple of us wander down to look at the stone hearths and fragments of hut walls, which are all that remain a century or so after the tunnel works were finished.

My sister appears from the tunnel just as we’re about to enter it. If it seems like precision timing, it’s only through her hard work. She’s walked about 4km up the trail from the nearest road, borrowing a torch for her walk through the 230m long tunnel.

Some of us ride slowly, others walk, back to the Poolburn Viaduct where we pause for a picnic lunch. We’re in time to watch a group of Sydney school students hoon by in the opposite direction. They’re on a training ride prior to some hard-core mountain biking near Queenstown. We wonder aloud to their teacher whether they’re supplied with air bags. He joins us in rueful laughter before cycling off to catch his charges.

The last part of the day’s ride is through the Ida Valley. While the slope is gentle, the trail surface is loose and sometimes bumpy, and there are long straight stretches. Oturehua takes its time to appear, ‘though it’s the "support crew' we see first, sitting trail-side with a take-away coffee in hand. Our accommodation, my sister tells us, is “just up that hill”. We grimace and ride on, skirting the not-exactly-vast township, and riding up to what turns out to be a spacious and beautifully set up lodge. A shower, a drink and the views to the impressive Dunstan and St Bathan Ranges are quickly restorative.

And so Day 2’s riding is done: 32km, easier going in fairer weather, with enough rugged landscape to make you admire the genius of railway builders past. As for us, there's a sense that we might just be properly broken in to this cycling business.
Posted by Nature Scribe at 18:08 No comments:

Much anticipated events can have an edge to them. As much as you hope things turn out well, there's always the risk of disappointment or let down. 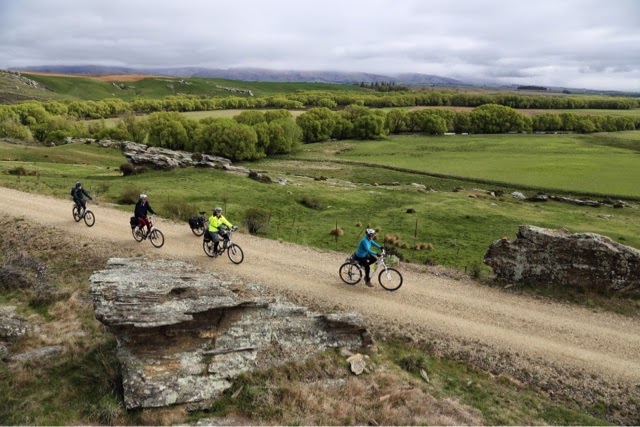 We first heard about the Otago Central Rail Trail about 8 years ago while we were based in Dunedin. Some Tassie friends were visiting, and we'd borrowed bikes and arm-twisted them into catching the Taeri Gorge train up to Middlemarch with us. The woman at the iSite in Dunedin had assured us we'd be able to ride a section of the trail from Middlemarch to Pukerangi, then catch the train back to Dunedin, bikes on board.

The beauty of a rail trail - we assured our friends - is that it seldom rises or falls by more than 4 degrees, the kind of slope that trains, and wary cyclists, find easy to cope with. But on our arrival, the man on the platform at Middlemarch quickly informed us that the rail trail ran in the exact opposite direction from our intended ride. He then looked at his watch and suggested that if we wanted to catch the train back from Pukerangi, we'd better start riding now. Here he paused, pointed to the hills, and said "up that way", with some emphasis on the "up".

We survived that false start on the Otago Central Rail Trail (OCRT) - with some sweat and tears - though it turned the trail into unfinished business for us. And it provided us with another good reason to return to the South Island, if any was required.

And so to October 2014. This time it would be a family trip, with my sister and her husband, and my brother and his wife joining us for the full, proper OCRT. The starting point for us would be Clyde, once the mining town of Dunstan, then the dam construction town of Clyde, and now as much sustained by the rail trail as any other enterprise. 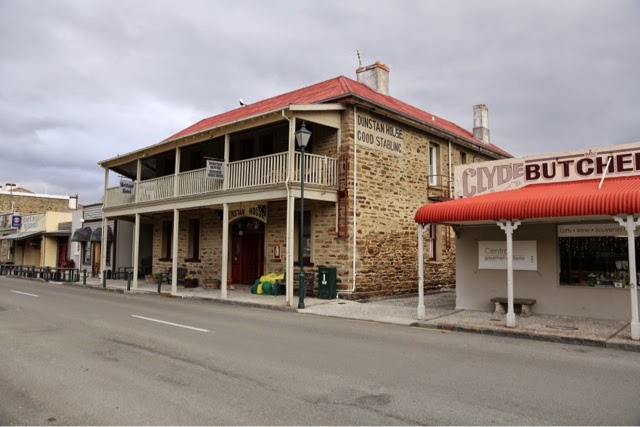 Clyde, as with everywhere in "Central", provided us with great hospitality: comfortable accommodation and hearty local food, with a few good stories thrown in. It seems we were staying in a place that once had a secret hidey-hole in its cellar. Colourfully-clad "dancing girls" hid there from police during the wild-west gold mining days.

As we readied ourselves for our first day of riding, pulling on fluoro-coloured gear that would have done the dancing girls proud, only the weather gave us any pause for thought. Overnight a gale had hit the area, blowing limbs from trees, shaking our accommodation, and dropping some heavy showers. Although the wind had now dropped, showers persisted as we tried out the hired bikes. 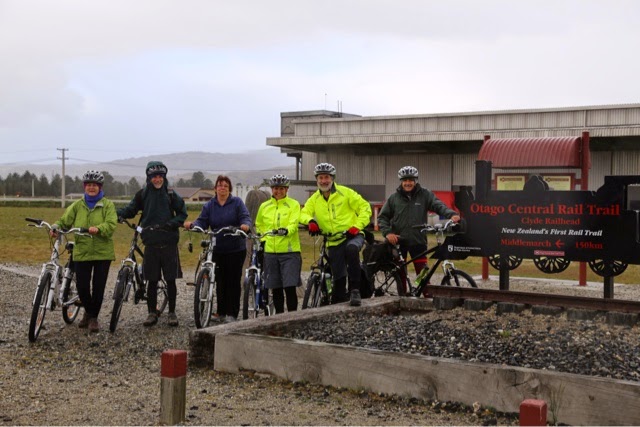 My sister had earlier made the decision not to ride as she'd fallen and broken her wrist six weeks prior. Instead she'd hired a car and designated herself as support crew, planning to meet us at regular intervals. For the first day my sister-in-law would join her in the car, partly to share the driving if the bandaged wrist caused trouble.

So four of us set off from Clyde, easing ourselves into the riding by agreeing to meet the others in Alexandra for morning coffee, a distance of just 8km. Why not start as you mean to continue? 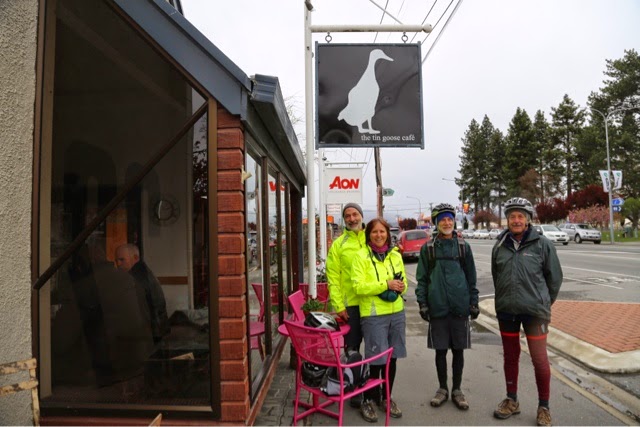 After coffee we left the girls in Alexandra, agreeing to meet for lunch at the Chatto Creek pub. Re-fuelled or not, we still had 27km more to ride today. By Galloway, a remote former railway station near a back road, the coffee had prompted other urges. I stopped by the trail to relieve myself, but before I could finish the job, a car appeared on the nearby road. It was my sister and sister-in-law, laughing and waving a camera at me out of the window. Such a helpful support crew! 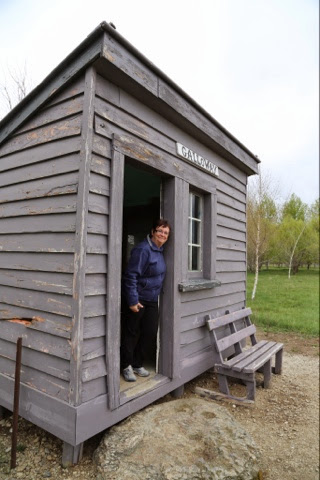 Another dubious support was my bike computer. It would be my friend/enemy over the coming days, Spock-like in its insistence that factors such as headwind or uphill slope would each knock X or Y km/h off my speed. We had both of these on our after-lunch climb of Tiger Hill. One minute I was tootling along at 20km/h, the next reduced by wind and hill to 8 or 9 km/h. 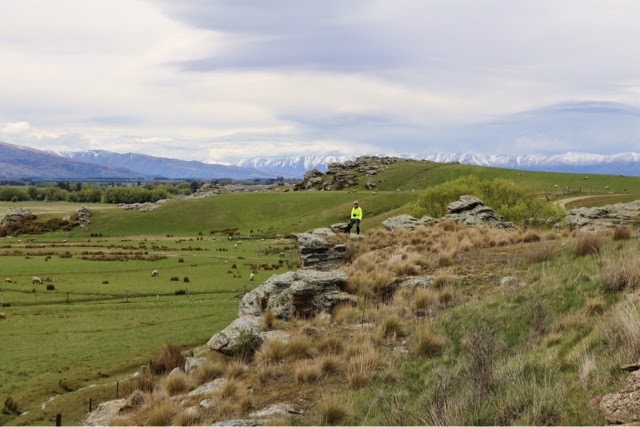 But what goes up must come down, and after the steep(ish) winding hill we had some faster free-wheeling sections on the way into our overnight stop at Omakau. My sister even managed to redeem herself by waving us off the trail into the town and showing us where we'd be staying. So that was Day 1 done. 35km, windy, showery, and somewhat uphill; cobwebs well and truly blown away.

Posted by Nature Scribe at 17:39 No comments: