The Shaky Isles, Part 3: In Praise of Useless Beauty 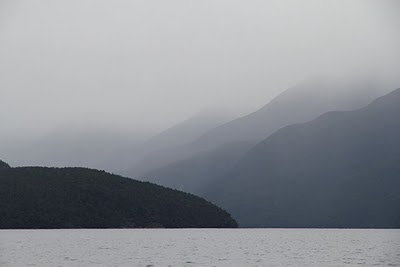 [Layer upon layer of beauty - Doubtful Sound, Fiordland, New Zealand.]
Elvis Costello possibly had the female of the species in mind when he penned the song All This Useless Beauty. However the phrase came to mind in a different context while I was in New Zealand’s Doubtful Sound.
The back-story begins in the Fiordland town of Manapouri. Decades ago Manapouri was a place of controversy. The lake that drains some of the extravagantly wet and lofty peaks of Fiordland, was due to be raised and joined with Lake Te Anau for hydro-electric power generation. Conservationists saw it as an afront to a beautiful place, as well as a foot-in-the-door for further incursions into the wild south-west of the South Island.
In the end a compromise saw the lake level remain more or less where it was, with some elaborate tunnelling now linking it and Lake Te Anau to an underground power station near Deep Cove in Doubtful Sound.
Our trip to that fjord began with a boat journey across Lake Manapouri to West Cove. From there a bus took us up and over Wilmott Pass on a road accessible only by water, through forest that could conjugate green many times over, were it a verb. And to Deep Cove, whose 5 metres of rain per annum explain the area’s eloquence in green.
There we boarded the Tuteko II,  just four of us, plus a crew of two, and sailed into a world of useless beauty. Because beyond Deep Cove there is nothing but frighteningly deep water, neck-achingly steep mountains, and heart-achingly beautiful scenery. It is a place that is patently not there for the service of humanity. Its water, wind, weather and wildness just are. Created by glacial action over several ice ages, it is a true fjord, a landscape open to the sea that has been cleft and scoured into a three dimensional puzzle of such depth that it laughs at map makers.
Well might Douglas Adams’ comic planet designer, Slartibartfast, have taken pride in his invention of fjords. And well might the Romantic poets have sought out the numinous thrill and chill of such landscapes, and coined the word sublime to describe them.
Even in a visit of just two days, I begin to feel myself taken prisoner by beauty. Words fail and expressions of awe begin to hang limp and useless. Even in the dark of night a humid nor’wester thumps into a swift and icy sou’wester, thrusting moist air high into the night sky. It rains wetly. Brilliant sheets of lightning illuminate the bellying cloud. Rolling rumbles of thunder ricochet off the steep canyon walls. And then all is deafeningly quiet.
In the clear morning we wake to the tinkling of tuis. The waterfall by which we’d anchored has found full voice too after the evening’s deluge. The surrounding tops are freshly garmented in snow. I stretch, gape, and finally form my impossible question. What do you do with such terrible beauty? 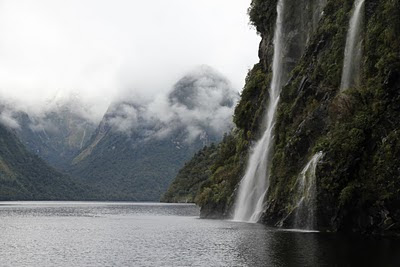 [A terrible beauty! Water plunges from the steep sides of Doubtful Sound, NZ]
My father was fond of the Stoic philosophers, fashioning for himself a set of more or less practical beliefs. They included the notion that aloofness from that which could hurt you,  let you down, or be lost to you, would shelter you from grief and bring some form of contentment. As sons will do, I rebelled against that philosophy of detachment, especially when I came to see that it did not keep him from even trivial grief. (His tears during the B-grade “weepie” “Lassie Come Home” are part of family legend!)
For me beauty is to be celebrated; and love to be lived. Out in Doubtful Sound I just want to give in, to be gulped down by the beauty. I suppose that puts me in peril, but I choose to remain open to beauty.
Perhaps that puts me in the same boat as the flightless kakapo. That marvellous parrot once ranged throughout all the useless beauty of Fiordland. Today barely 100 individual birds remain, thanks to introduced predators. Most of those birds are on predator-proof islands, a kind of avian gated community that’s virtually guarded by humans.
The same Douglas Adams met the bird and described it thus.
The kakapo is a bird out of time. If you look one in its large, round, greeny- brown face, it has a look of serenely innocent incomprehension that makes you want to hug it and tell it that everything will be all right, though you know that it probably will not be.
Might he not conclude the same about Fiordland, or indeed about any one of us? Which place or person is not imperiled by climate, comet, cataclysm or love? Even so, I choose attachment. In my incomprehension, I choose to look into that greeny-brown face. And I hope to do so for the rest of my life.
Posted by Nature Scribe at 14:26 4 comments: 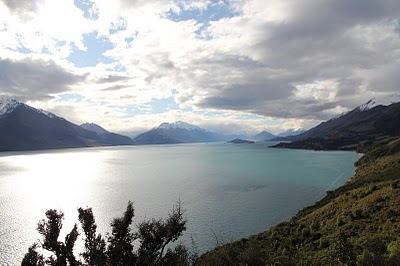 [Lake Wakatipu: the northern end looking towards Kinloch and the Humboldt Range]


Ah pedometer, my friend! Since May this year I have faithfully slipped you onto my belt, and set off to do more than my target of 10 000 steps per day.
Nominally this devotion has been in the name of the Global Corporate Challenge, a world-wide event that encourages people to team up and get moving, with step counting as one motivation. But in truth I’ve always had a more personal motivation, and that is to be active, healthy and able to keep walking – in particular bushwalking – for at least another couple of decades. And my pedometer has helped to keep me honest about how active I actually am.
On work days I walk the five and a half kilometres from home to the office. Between that, a few bushwalks and some regular training walks, I’ve managed to average nearly 12 000 steps per day for the last four months or so.
I first came to appreciate pedometers about four years ago, during a long stay in New Zealand. My first trusty pedometer helped in training for some of the Great Walks we had planned to do back in 2006. That “wee” counter had even survived an accidental dunking in the toilet. A bit of drying out in front of the fire restored it to full service, and it kept me honest until, like Gollum’s “Precious”, it slipped off and was lost.
Of course, to paraphrase Lance Armstrong, it’s not about the pedometer. The little digital device is just a tool, a way of making visible something that is otherwise slow to become visible. And that is health and fitness, and general well-being. Not that the use of a pedometer is a guarantee of these things, as we have found during our present visit to the Shaky Isles. Despite all the training and planning, health issues rather than earthquakes have intervened. We have made the hard decision to abandon our planned tramp on the Greenstone/Caples Track near Lake Wakatipu. Instead we will nurse our health, and do some gentler exploration of the Southern Lakes and Fiordland areas of this beautiful country. 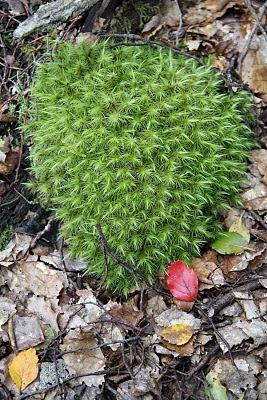 Decision made, we head out for a pre-lunch consolatory stroll in some of the beautiful red beech forest near our accommodation at Kinloch. The forest is grand, green and serene. At one spot I am drawn to a fallen red beech leaf. Against the mossy green it stands out like the flame of a single candle, lit as a prayer in this green and holy space. It is prayer for health and healing.
Posted by Nature Scribe at 13:58 1 comment: 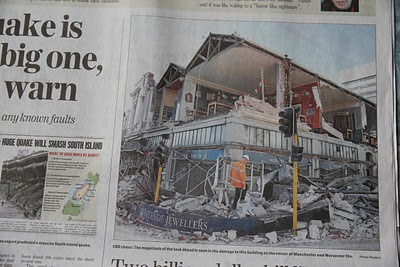 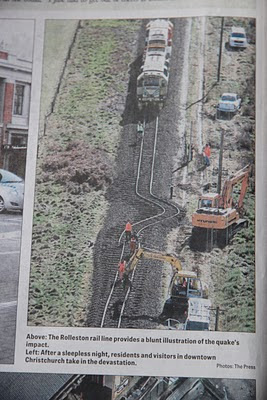 [newspaper images of the Christchurch earthquake - courtesy Christchurch's Sunday Star Times]
They say 24 hours is a long time in politics. But in geology, it’s the merest whisker. And that’s the margin by which we missed being in Christchurch during Saturday’s Canterbury earthquake. It was a whopper: 7.1 on the Richter scale, but shallow and therefore both damaging and significant.
On Friday, having made the long drive from Canterbury to west of Nelson, we were exhausted. So we slept right through Saturday morning’s ‘quake. I seem to make a habit of doing that, which is disappointing for someone trained in earth science. During my student days I was benighted in the Blue Mountains of NSW and had to sleep in a tent on a gravel road, high in a remote part of the mountains. Overnight there was an earthquake, centred somewhere beneath the mountains. Amazingly I slept right through it.
The only earthquake I’ve been conscious for was a Tasmanian “tiddler”. I was woken by what I took to be a huge possum thumping onto the roof. My sleepy brain registered that he must have been a sumo-sized possum, because the bed seemed to shake. But it wasn’t until the next morning that I heard on the radio that the “possum” had in fact been an earthquake.
As for the Christchurch quake, we only learned about it via a mobile call from one of our daughters in Australia. Much to their chagrin, New Zealanders find themselves on the edge of the tectonic plate known as the Australian plate. It was this that had pushed past the Pacific plate rather more vigorously than is polite. The usual slippage is something like 4mm per year, whereas this one was up to 5 metres. Two people were seriously injured, and many others received minor injuries. Many others reported to hospital with apparent heart attacks. But amazingly, at the time of writing, no fatalities have been reported.
Indeed with typical Kiwi humour, neighbours in the farming districts were light-heartedly comparing how much land they had lost or gained as a result of the earth movements. And one farmer on typical flat plains country reckoned he could now boast “rolling hills”.
But the humour masks a nervousness that the earth may yet have more to deliver, as it did with fatal consequences in 1931. 256 people were killed by a 7.8 magnitude earthquake centred on the North Island city of Napier. And there have been many others killed before and since. 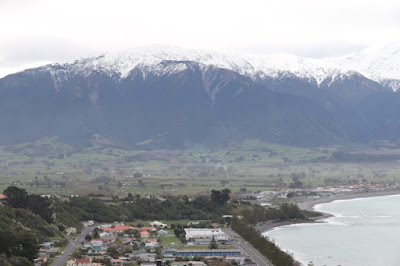 [Mountains rise sheer from the sea above Kaikoura: one result of living near the plate boundary]
Living at the pointy end of tectonic plates, where earthquakes, volcanic activity, landslips and avalanches are real threats, has created a certain level of uncertainty about life among New Zealanders. Perhaps they recognise the temporariness of life in a way that Australians don’t, living as we do on a stable, old and seemingly eternal continent.
Tonight the South Island is expecting a stormy change, with wind gusts forecast to reach 130km/hour. You’ve gotta love this place! Hopefully I’ll report more once we get through this next challenge.
Posted by Nature Scribe at 15:20 No comments: