The Central Plateau has been dubbed ‘the roof of Tasmania’, and ‘the land of a thousand lakes’; which is about as nuanced as calling Australia the ‘wide brown land’. There’s so much more to this wild and high part of our island state.

It owes a great deal of its identity to dolerite, and to a massive sub-surface upwelling of that igneous rock during the Jurassic age. Almost equally its identity has since been shaped by the ice sheet that covered the surface during a number of glacial phases. That covering was more ‘doona’ than ‘sheet’, as it measured hundreds of metres thick in some parts. As that huge amount of ice, at least 6000 sq km in area, slowly jostled and crunched across the plateau, it carved out lakes – many more than a thousand – and left sharp peaks and dramatic clefts.

While much of that ice-age drama is over, the Central Plateau remains a vast area of largely wild high country. It’s roughly bounded by Great Lake to the east, the Great Western Tiers to the north, and the Walls of Jerusalem to the west. To the south the boundary is more vague, but perhaps the Lyell Highway marks a convenient edge. As this post is about my ‘happy places’, it’s probably okay to leave the big picture fuzzy, and focus in on the subject at hand.

So … where on this cold, high, wet and wild plateau are my happy places? I’m particularly thinking of smultronställe, a Swedish word that evokes that sweet, semi-secret favourite place; somewhere that – particularly during these cold months – makes me smile just thinking about it.

During more than 40 years of walking in Tasmania, I’ve been privileged to walk across the plateau numerous times, from every direction. I’ve written about some earlier walks here Walking With Ada and here No Lack of Lakes  All that plateau wandering makes choosing particular smultronställe as difficult as naming my favourite child. But if I had to pick just three Central Plateau ‘happy places’, they would be (in no particular order):

1) Certainly this choice needs some narrowing down, as The Walls of Jerusalem National Park covers 518 square km! Scattered across this mountain-fringed park are some wonderful campsites, both formal and informal; on-track and off-track. And I could have selected any of those. But because mountains are such a feature of The Walls, I’ve chosen Solomons Throne as my Walls of Jerusalem ‘happy place’.

The peak is not the highest in the park, nor is it the most difficult to ascend. What make it sit so sweetly in my memory is a combination of my experiences here, and the superb vistas from the top. I’ve been up there in thick snow, and relished views outward towards a snow-bound Overland Track, and inward to the nearby pine-fringed lakes and vales. I’ve been there with family, introducing them to the wonders of our wilds. I’ve been there with friends (many times); with first-time walkers; and with international visitors who thought Australia didn’t have mountains. While I will certainly tire during the steep climb up a rocky chute to the peak, I will never tire of sitting on the Throne.

2) The upper Mersey River roughly marks one edge of the Central Plateau. The Mersey Forest Rd also gives good access to one of the sweetest spots on the western side of the plateau: Mount Rogoona. I first heard about this mountain during the 1980s. A group I walked with had been planning a trip there, but a major fire burned out much of the track and surrounding areas, so we walked elsewhere. It wasn’t until nearly 20 years later that I finally reached that peak.

And what a peak! It sits, sphinx-like, above the waters of Lake Myrtle, its knobby summit giving way to dolerite cliffs that are like a younger, smaller sibling of the Organ Pipes of kunanyi/Mt Wellington. For most visits to Rogoona, Lake Myrtle is the most convenient camping spot. However direct access to the peak is not easy from the lake. I found this out – in reverse – when a few of us decided to return from the summit direct to the lake. I would not recommend it! Rather the track between Lake Myrtle and Lake Meston leads to an easier slant-wise route to the mountain.

Rogoona is essentially a small plateau whose summit is near the sheer dolerite cliffs on its north-western edge. So the views from the top are as vast as they are stunning. Steeply beneath and quite nearby is the tranquil Lake Myrtle. But your eye soon wanders west beyond the lake, over the nearby Cathedral Plateau, to the highest mountains of Tasmania, from Mt Pelion East to Mt Ossa and numerous others further south.

Not once, but twice I’ve had that view ‘interrupted’ by a wedge-tailed eagle flying over. I’ve written in more detail here Eagle, but suffice it to say that being buzzed and eye-balled by the largest raptor in Australia is one of the greatest privileges of being in remote Tasmania.

After you’ve had that kind of mind-bending, time-stretching summit visit, there are few better places to sit and contemplate it than by the shores of Lake Myrtle. I’ve written about one particular experience here Myrtle 1, here Myrtle 2, and here Myrtle 3.

3) If the preceding ‘happy places’ would be easy to locate, the third is deliberately vague. Un-named Lakes and Pencil Pine Groves is a category of smultronställe that invites you to do your own explorations; make your own discoveries. And there could be few better places to wander in search of lakes and pencil pine groves than the Central Plateau.

Obviously the number of lakes alone makes searching the plateau for sweet spots a lifelong task. But once the search begins, it becomes more subtle than you’d think. Lakes mean water, and many lakes mean a lot of water. That in turn means often waterlogged ground, and camping in such places isn’t much fun – not to mention the impacts it can have on that environment. In my Central Plateau wanderings I’ve seen many spots that looked great from a distance, but turned out to be unsuitably sodden once you got there and looked for tent spots.

Happy Place searchers also have to consider another weather factor apart from precipitation, and that’s wind. The often fierce winds here further narrow your camping options. What may be a perfect site on a calm night can turn perilous when the wind gets up. Shelter is paramount, which is why pencil pines are often your friend. But there are complications here too. Many pencil pine groves are so dense that there’s no room for tents. And if there is room, the ground is often covered in dense, soggy sphagnum and/or gnarled tree roots.

So … have I found some ‘Goldilocks Zone’ campsites on the Central Plateau? Of course I have. And I’ve spent some of my most blissful days and nights between a lake and some pencil pines. Am I going to share their locations here? Sorry, I’m not. What I can say is that if you haven’t searched for your own version, then you have a baffling, frustrating, but ultimately sublime quest ahead of you. If you have found such sites - or you recognise some of the ones pictured - I’d suggest you share that information sparingly. Let others have the thrill of the quest. Some places just shouldn’t be on Instagram.

Posted by Nature Scribe at 16:03 No comments:

In the (relatively shallow) depths of a Tasmanian winter, I find myself daydreaming of other places and other seasons. Take Sweden in summer as an example. Why Sweden for goodness sake? (you may ask.) Haven’t you watched enough Scandi noir to know Sweden is a place of constant snow, rain and grey weather, all bundled up in a flat and dreary landscape?

My simple answer is this. Before you judge it, spend one week of summer in Sweden. That is unless you object to VERY long, mild days, beautiful forests, meadows full of wildflowers, and stunningly intricate waterscapes of lakes and sea. And that’s not to mention the Swedes themselves, who in summer throw off their Scandi gloom, and become all frisky and fun-loving.

Take, for instance, one of their linguistic delights: the Swedish word smultronställe. It literally translates “place of wild strawberries”, but is most often used metaphorically to mean a semi-secret favourite place; a place that makes you happy. English phrases like “sweet spot” or “happy place” feel linguistically pale in comparison. If you've eaten wild strawberries, you'd surely agree. Smultronställe is a word forged from dark winters, scarce sun, and the utter delight at the sweet return of light and flavour.

So it’s not unusual in Sweden to be asked for your smultronställe. What is your special place in the outdoors? It’s a question that resonates very much with me in relation to bushwalking in Tasmania. I’m often asked, especially by those who are not bushwalkers, or by people from other parts of Australia or the world, what my favourite bushwalking spots are. My plan for what remains of winter is to write about some of these in a series of blog posts; to share a bit of my daydreaming about places I'd rather be. However I should warn – and it’s probably in the spirit of smultronställe – that my posts might be a little geographically vague. If places are semi-secret, maybe it’s best that people discover their sweetness for themselves.

But before I start on my Tasmanian smultronställe, it’s only fair that I mention at least one favourite Swedish place. And that is Ängsö National Park, on the eastern coast of Sweden, about an hour’s drive north-east of Stockholm. I’ll let these images be a little taster of this beautiful place, and a reminder of all that was sweet – and accessible – before the pandemic. Let’s hope that such places will be within safe reach again in the future. 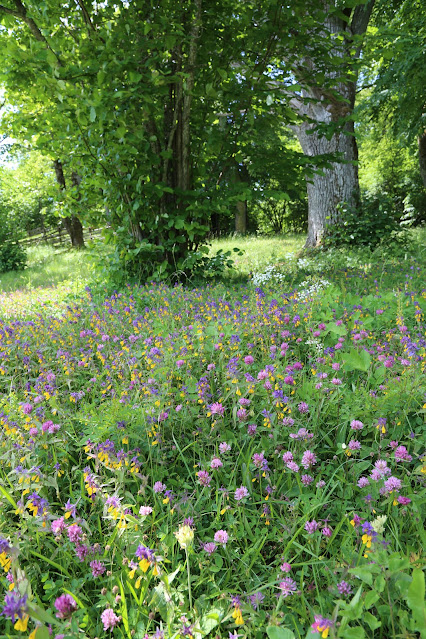 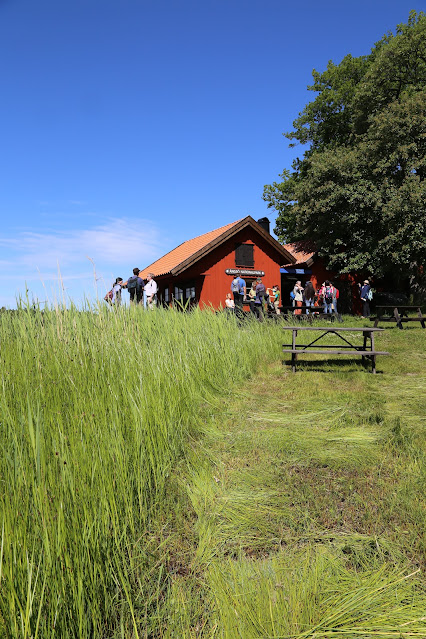 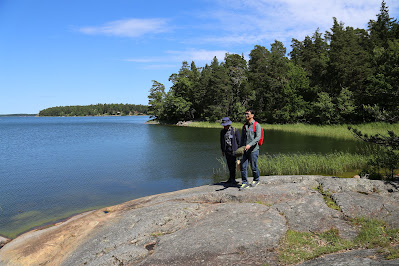 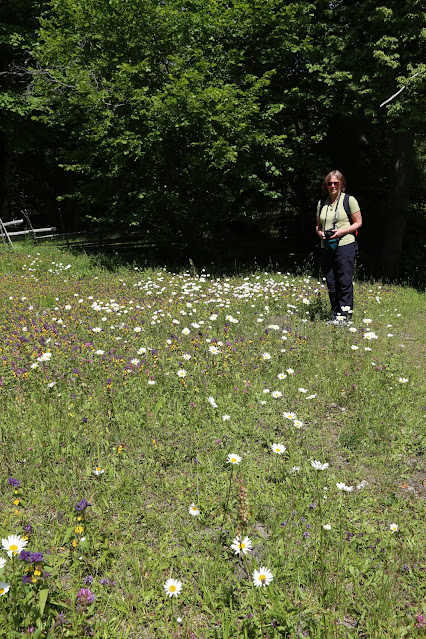 [Scenes from Ängsö National Park, Sweden]
Posted by Nature Scribe at 10:28 No comments: