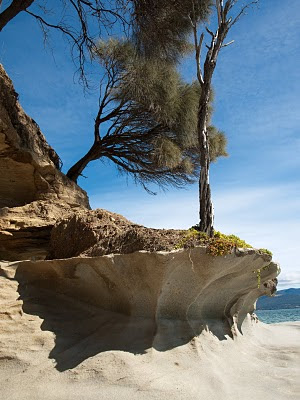 [an incomplete chapter, the last from my yet-to-be-finished story. If you watch this space expecting more, you're going to need some patience! However comments and suggestions - of a polite and encouraging nature - are most welcome.]

Shanks’ revenge was neither as sweet nor as long lasting as he had expected. When Peg found out about the toilet and the “toe tapping” (as Shanks put it), she had gone so quiet that Shanks took her silence as disapproval. In fact it was closer to stunned shock mixed with a deep indecision about what to do next.

And Terrence had given Shanks little satisfaction either. He’d made himself scarce by day, presumably to go fishing or to take the dog for a walk. And at night he had taken to staying up late with his grandparents in front of the TV – despite their stern commands that he go to bed – even falling asleep in the battered old sofa, and having to be carried into bed by his Pa.

To tell the truth his Nan and Pa were rather touched by this “regression to childhood” (as they saw it). He’d never been what they’d have called a sweet child. But he had been a little more open to the odd hug than the edgy pre-teen he had now become. So despite their stern words they, and especially his Pa, were more than happy to have this close contact with T, albeit that he was a comatose, leggy bundle as he snuggled into his Pa’s shoulder.

He may have been hard for others to find but, try as he might, Terrence couldn’t avoid Geoffrey Boycat. The cat had an uncanny way of just appearing around whichever corner you next turned. And then, whatever you did, his eyes would hold you, and his feline voice draw you towards him.

So on a wet and windy afternoon Terrence found himself being grilled yet again by a cat who seemed to simmer just beneath the point of anger.

“And this flushing . . . it was your idea?” Terrence began to open his mouth, but Geoffrey continued. “It was NOT a good idea!” …

“The idea BOY… was to wait for Bonfire Night. Remember? ….

“Does de dame want I should take ‘er out wid me fer a picnic, yeah?” Shanks made a woeful gangster. Despite his hard-boiled looks, something in his facial anatomy prevented him from sounding truly gruff. Husky yes, but dark and threatening? Never.

Still Peg knew he was doing his best to be light-hearted, to cheer her up after a frosty few days of all but avoiding Terrence. Even her Pa had seemed hard to reach, spending more time being awkwardly attentive to T., and leaving her too much in her Nan’s fussy, food-centred company.

So Peg was relieved when they again found themselves out for a stroll, though this time Peg used a small back-pack instead of the doll’s pram. “You gonna put me in dat ting, huh? You really tink so?” he wheezed as Peg unzipped the top pocket for him. She simply held it wide open and made no comment, so he mockingly muttered under his breath and clambered into the pocket.