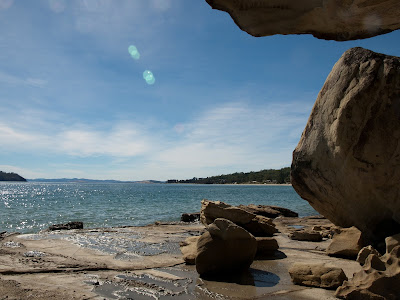 The 4 o'clock ferry would have left on time had Mrs Flanagan not hove into view, waving, tooting and shouting, just as the crew was raising the ramp. "Silly old duck" said Peg's Pa. "She's always late. And she'll expect them to drive on for her too, you watch." Peg couldn't bear to. She walked to the front of the ferry, kicking at the rounded rivets that mushroomed out of the rusty floor. As she leaned on the chain across the bow, she booted a half-eaten apple over the edge. It plopped satisfyingly into the surging water beneath - a small satisfaction, and all she'd get on the whole trip back.

Though they had been first onto the ferry, their aisle was the third one off. This meant that Mrs Flanagan drove off ahead of them, and stayed in that position for the whole twenty winding kilometres from the ferry terminal to the shack. If Peg's Pa was no speedster, Mrs Flanagan drove like a snail on valium - or so her Pa said. As the old ute puttered up the drive it was well past 5 o'clock.

The trio was greeted by a surprisingly chirpy Terrence, who enquired most politely what sort of day they had had. Peg simply shoved past her brother and ran inside. As he half-listened to his Nan's comparison of morning tea and lunch, Terrence counted in his mind. When he got to twelve, there was a loud scream from the region of the toilet. He smiled, then joined his grandparents as they rushed inside.

By the time they got to her, Peg had stopped screaming. She came out of the toilet so fast that she half-collided with her grandfather. As she spun off him, she dodged deliberately towards her brother and aimed a boot straight into his shin. "You slimy pig's bum!" she shouted, while Terrence hopped up and down holding his leg. "Peg!" both grandparents called after her, but for once Peg ignored them and stomped into her room, slamming the door shut with surprising ferocity.

"Now what's all that about young fella?" His Pa looked upset enough for Terrence's shrug to freeze on his shoulders. "Just a little joke Pa." He shuffled, thrusting his thumbs into the waistband of his jeans. His grandfather waited. "Look all I did was stick a sort of dead spider on the toilet, just to scare 'er a bit, you know . . ." His Pa opened the toilet door and scooped up the spider shell, holding it out for them to see. "She can't take a joke Pa, she's useless. I mean that wouldn't scare anyone, would it." His Pa knew that it didn't deserve the reaction Peg had had, but he felt there was more to it. And he didn't like the way Terrence treated Peg. "Listen T, I want you to just leave her alone for a while. Stay outside until it's dinner time, all right?" Terrence gave a slight nod, and disappeared out the back door. By the time he reached the neighbours' house, he was smiling broadly. He could tell Geoffrey that Part 1 of the plan had gone smoothly. Soon he could try Part 2.

Terrence crept towards the toilet door. He stopped, looked around, then held his breath the better to listen for any sounds in the house. Hearing none, he stooped to listen at the door. He then gave a soft, low whistle, remarkably like the one he had heard Peg give. In one hand he held an empty margarine tub; in the other a stiff piece of paper. He took great care not to rattle them as he listened hard for any response from the spider. Finally he caught what sounded like a faint humming. It was an old tune he had heard somewhere before, but he couldn't have put a name to it. Still, it was enough. Taking a deep breath, he gripped the door handle hard, then burst into the spider's home.

Shanks was distracted that morning. Peg had only come for a brief visit, and hadn't even arranged another meeting for the day. She had seemed very upset about something, and Shanks was worried. So when he heard the soft whistle, he immediately put aside a piece of roast moth he had been absorbing, and came out from the cornice.

Expecting to see Peg, he was happily humming "God Save the Queen". Instead when the door was flung open, it was the boy who rushed into the room with a whoosh of wind that almost knocked the spider over. Before Shanks could recover, his world had gone dark and echo-ey. Then it had turned upside down and all around. He tumbled in helpless orbit, his feet giving him no grip on the plastic of the tub. He didn't even know which way was up.

When he next saw light, he had almost no chance to use it. The tub was being thumped violently, and he was falling, then landing upside down in water. Barely a second later it was dark again, and a thunderous rush of water was spinning him over and over, propelling him between dark walls, as helpless as a flea in a flood. Despite all this, Shanks did have the faintest idea where he was. In his tumbling fall he had glimpsed some words, and they were not just any words. He had seen in plain black on white, and very close up, the words ARMITAGE SHANKS.

So as Shanks was tossed helplessly through the water, he at least knew where he was. He had been put down his own white throne and flushed away. Though close to panic, he managed to think one calm thought. It was something he'd picked up from the box, though he'd never had occasion to use it - until now. As he turned over for the ninth time, with the water rushing him mercilessly towards he knew-not-what, Shanks half smiled as he said to himself "I think he would've wanted to go that way."

* * *
It was not to be. During his twelfth tumble, a couple of Shanks' legs touched on something rough enough to give grip. Instinctively he caught hold and dragged himself out of the water, and up onto some kind of narrow shelf. Shanks gulped the air gratefully, then sang faintly "Long to Ray Noverus" as a kind of prayer. It was still totally dark, but the flood of water was slowing. He guessed that the level was dropping too. As his senses slowly returned, he pieced together where he was, and why. A slow, wet anger smouldered against Terrence. "That collargrime of a boy will pay! Oh in a thousand ways he'll pay." But meanwhile Shanks had to think about the less pleasant task of getting back home. Though he felt he'd done enough swimming for a lifetime, he soon came to the gloomy conclusion that the only way back was the way he had come. He would have to unflush himself!

The return journey was much slower than his outward journey. And just as dangerous. If the boy or anyone else pushed the silver button again, he would be lost forever. That wasn't his only worry. There would be a long section of underwater travel, and he wasn't sure how good he was at holding his breath.

In the end however, he found that the upper surface of the pipe gave enough grip to let him hold it all the way back. Even in the panicky underwater sections, the solidity of the wall gave him the confidence to go on. So after a very long three minutes, Shanks surfaced into the darkness at the bottom of the toilet bowl. A faint chink of light showed where the ill-fitting seat met the rim of the bowl. After a tricky slippery ascent, he squeezed himself under the seat, and out into the light-flooded room.

Once back under the cover of the cornice, he began to dry out. As his fear left him, it was replaced by anger. Just as quickly, the perfect plan suggested itself to Shanks. A plain and simple plan; a plan with poetic justice. He smiled briefly, then went off in search of food. He would need his strength.