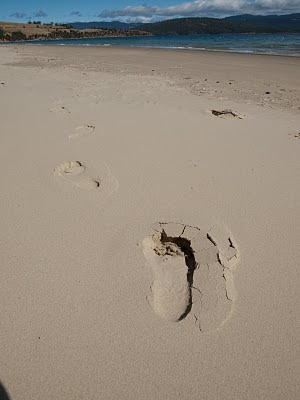 Eventually the dog returned carrying a dirty piece of cloth in its mouth. He dropped it at the boy's feet. Terrence looked at the bundle dubiously, but then at a motion from Geoffrey, picked it up. Carefully he unwrapped it, to find what looked like a dead Huntsman. He spun around to Geoffrey. "Is it . . .?" The cat shook its head slightly. "No, look at it closely." Terrence had the creeps about all things crawly, but he obeyed the cat. Picking it up, he saw that it was in fact an empty spider shell. "But how?"
Geoffrey made a tutting sound. "They shed their skins, boy - as they get older and grow bigger. Slip out of one skin when the new one's ready. Disgusting really. Don't know why they can't just moult a bit at a time like any decent animal." Terrence was turning the shell around in his hand, a small grin dawning on his face. "Ah, I see you're starting to grasp the possibilities, boy. You scratch our back, and we . . . " He let the words hang for a while, then laughed in an odd way. Terrence was too far gone to hear any threat in it. Quickly Geoffrey gave him a revised set of instructions. Terrence nodded absently, all the while twirling the spider skin by one leg. Geoffrey had to give him a sharp tap with his claw to be sure that the boy had heard, and would comply. Finally the boy was allowed to leave, small cloth bundle in one hand.
* * *
Posted by Nature Scribe at 09:10

I've been waiting at least 20 years to get to the end of this story so no comments till you've finished! Hurry up!!