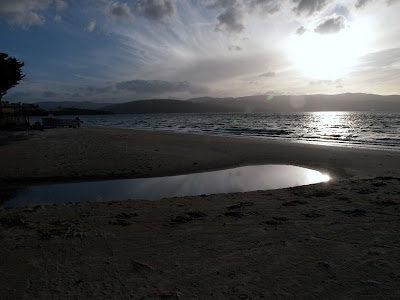 [photo: sunset across the D'Entrecasteaux Channel from Bruny Island, Tasmania]

[Everyone loves a picnic, even Armitage Shanks ... and especially on beautiful Bruny Island.]

Whatever plans Terrence had, he kept quiet about them for the next few days. Apart from giving Peg the occasional baleful look, he carried on as though nothing had happened. Though she knew better, Peg began to hope that the incident would be forgotten that perhaps he hadn't even seen Shanks. Besides, the weather had been so good that Terrence spent most of his time out in the dinghy. He enjoyed fishing, especially cutting and gutting the catch.

At the same time Peg had become absorbed in the business of getting to know her new friend. Of course that meant spending a great deal of time in Shanks' room. Twice Peg had to assure her that she wasn't ill. "Just got a tinny bladder " she'd quickly explained. When her Pa said something about not using too much tank water, Peg realised she'd need another meeting place.

The front veranda was a perfect alternative. The soft whistle would always be their signal. Peg would lie down on the old banana lounge beneath the rusty veranda awning, cover her face with a hat, and talk quietly in the direction of the low ceiling. She still had to take care, so this was mostly done when Terrence and her Pa were out fishing, and her was in the back garden or the kitchen. Sometimes she used the radio to help cover the noise of conversation. But this often made Shanks sing, which even tone-deaf Peg found remarkably unattractive.

One afternoon Peg thought of something altogether more suitable. A picnic! To keep Terrence from coming, she disguised it as an outing for her teddy and doll. This also allowed her to smuggle Shanks out under cover of the doll's stroller. The spider almost gave it away when he was tucked down next to the doll. Peg had said the doll's name, Hamble, and Shanks, who was in a very buoyant mood, had started saying "Hamble-amble-amble" to himself. He'd finally burst into full-scale spider laughter. Peg had to cough loudly for some time to cover up the odd noise of a laughing spider making sounds that rhymed with Hamble. Then she had to convince her that she really was well enough for an outing.

Even so Shanks hadn't shut up until they reached the beach, blurting out things like "scramble-shamble-handbill-anvil" all the way down the track. But by this time Peg was able to join in, and the two laughed themselves helpless as they made up a riotously unsingable ditty about their "ramble with Hamble in our ample p'ramble-ator". Even knowing that all this fun was at the doll's expense didn't really bother Peg. She felt she had grown out of dolls by now. Perhaps if Terrence had been laughing at Hamble it would have been different, but he hadn't so it wasn't.

It was a magical afternoon in every way. The late summer sun shone down hard on the deserted beach, but a soft sea breeze kept them cool. Peg showed Shanks his first beach, let him try the water, pointed out the delights of the rocky shore. Here she lifted rocks to reveal dozens of hermit crabs. Each time she would crouch down, look up at Shanks perched on the edge of the stroller, then with a great flourish would lift the rock, calling out "Meet Cousin Crab". Then they'd both laugh out loud as the crabs - sometimes twenty or more - scrambled to find cover. "Shanks knows what that's like", he said once, coming down onto the sand to ape the crazy scuttling of the crabs. As he ran in mad wonky circles, he shouted "Oooo ... I's been espied! Oooo ... don't panic! Ooo ...abandon ship! Ooooh ..." Peg crumpled up in helpless laughter.

Then in the grove of casuarinas at the end of the beach, Shanks did party tricks with the crusty bark of the needle-leaved trees. "Now you see me . . . now you don't", as he disappeared into the merest crack in the bark, reappearing to run up her bare arm when she least expected it. After ten goes of that game, Peg suggested they stop for afternoon tea. Out of a bag slung over the arms of the stroller she took a couple of Iced Vo-Vo biscuits for herself, and a wasp and a blowfly for Shanks.

For a time he became all chivalrous, and prattled about his "great gratitude to M'lady". He grew quieter once the serious wasp-sucking began, by which time Peg had started on an apple. Their dining was accompanied by the gentle plap of wavelets, and the shushing of wind in the casuarinas. Once squabbling gulls made a low pass over the pair, carefully eyeing their prospects, but Peg made sure they didn't add spider to the menu.

The lowering sun lay a sheet of glare over the Channel. Peg had to shade her eyes to follow the progress of a small fleet of sailing boats. As they edged out of sight, Peg turned back to Shanks, suddenly feeling serious. "You're gonna have to be careful of my brother." The last word was said as though it tasted unpleasant. "He doesn't like insects or that type of thing." Shanks would have objected, but he was mid-way through the blowie. "He got bitten by an ant once. Shoulda heard him scream! When he got over it he went out and poured turps down five anthills, then chucked a match." Shanks listened as attentively as his dining would allow. Peg went on. "An' he pulls wings off flies, and legs off beetles, and stuff like that." Shanks wondered what was wrong with the removal of inedible parts, but said nothing.

Peg grunted as she got back on her feet. "Anyway, just be careful of him. He doesn't like me, so he reckons anything I like is rotten." Shanks quietly rolled the fly carcass onto the ground, and crawled up to the edge of the stroller. "I will take heed o' thy warning M'lady." After a pause he added "Shanks cranks his thanks till it ranks high as planks on banks, and spanks any rank & cranky wanker who sank . ." and so he went on, ruining the serious mood. But although he succeeded in making Peg do the thing he most loved, her laughter was not as carefree as it had been. Her brother, or the thought of him, cast a faint shadow over the rest of an otherwise perfect afternoon.

There were other chances for Peg to find out about Shanks, but none quite so wonderful as that picnic day. Still, she took the chances that came along. Peg soon discovered that Shanks had a couple of favoured topics of conversation. Apart from food, on which they agreed to differ, Peg found Shanks often asking one particular question. He would grandly introduce these sessions by calling them "Question Time", and asking for honourable members to "come to order". He'd then clear his throat noisily, and Peg would know that the question was following. He would ask it in different ways, but it all came down to the same thing. "What does benign mean?"

At first Peg thought this was a simple game. She just told him it meant "good", (though she was guessing.) For a time that seemed to satisfy him, but sooner or later the question would come back. "And after this important message, our next story looks at benign. What does it really mean?" Peg, who was getting used to his televisionese, finally went and found a dictionary. After a deal of searching she stumblingly read out - "Benign: gracious, gentle; fortunate, salutary". Shanks, who had crept down the wall to be nearer to his dear, gave a peculiar growl. Surprised at this unfamiliar sound, Peg sat up to look at Shanks. "Order! Order! The honourable member must answer the question," he called, almost angrily. "But I have . . . er . . . at least I've told you what the book says."

"Well the book's wrong! O Woddafeeling! Fortunate and salutary ... tell me what's fortunate and salutary about a spittling trip inside a rolly-up newspaper? And what's gracious and gentle about being screamed at by old Sausage-face?" Suddenly he started running in erratic circles, muttering things like "Long to Ray Noverus" and "so help me Gard!" Peg had never seen Shanks so wound up. She had no idea what had caused this sudden mood change. She thought of trying to rhyme a few words with benign, to see if he might laugh his way out of the mood. But she could see that he was genuinely upset, so she stayed silent. It seemed it all had something to do with the word "benign", but that particular afternoon she could get no more out of Shanks.

When he finally stopped running in circles, he was only interested in food. And then when Peg gave him two juicy specimens, he almost forgot his manners. Grabbing the insects, he disappeared under the awning, only to appear again briefly to call out a full-mouthed "much obliged".

As it turned out, his exit was well-timed. Just at that moment Terrence and his grandfather appeared at the bottom of the hill, jack-and-jilling a fish-bucket between them. Peg quickly picked up her book, and lay down on the sunny lounge again. When the two stepped onto the veranda, she looked so relaxed that not even Terrence would have known how churned up she felt. Besides, he had thoughts of his own. When she asked about their catch, he reached into his bucket, pulled out the severed head of a gurnard and plopped it onto Peg's stomach. "Ask it yourself!" he whispered sharply, before running off laughing. Yet even this couldn't stop her from thinking about Shanks. And about his problem with being benign. She would have to get to the bottom of this soon, or the loopy spider might give himself away in a moment of thoughtless rage.