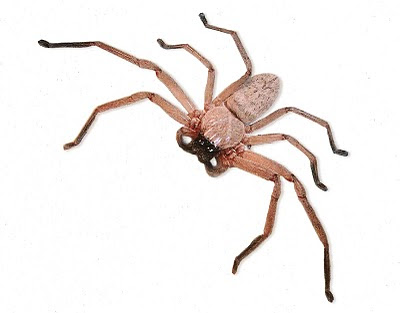 [Delena cancerides - aka the huntsman spider. This is the spider that inspired the story of Armitage Shanks]

[Shanks rides again - briefly. I found this follow-up fragment hidden on my hard drive. It sets the scene for Bonfire Night, where something (??) is going to happen - when I get to write it!]

Bonfire Night was a special occasion for the whole island. If it commemorated anything or anyone, no one could remember what. It was even at a different time of the year from every other community. Peg’s Pa reckoned it gave the “fire-ies” an excuse to dress up and look official while playing with trucks, hoses and fireworks.

For weeks they’d been preparing a paddock just down the road, mowing it so low it was little more than blondish-brown stubble. Then they’d started gathering branches, logs and other combustibles into a pile in the centre of the clearing. Sometimes they’d wake to find bits of stray building material and shack cast-offs added to the stack. No one seemed to mind as long as it’d burn, although Peg’s Pa couldn’t resist salvaging a broken rocking chair that turned up one night, despite Nan’s protests. “Nup – this’ll come in handy for sure” signalled the end of debate as far as he was concerned.

Barry Burnside, the chief of the volunteer fire brigade, was the only person on the island with a permit to buy, keep and use fireworks. “Makes him mayor-for-a-month” was how Peg’s Pa summed it up. Everyone deferred to Barry’s wishes, and his opinion on everything from footy to politics was suddenly important. Even his sixty-something year old frame seemed to straighten up under the influence of his short-lived high status.

Barry’s impromptu mini-sermons were an unavoidable part of the season. “Bonfire Night may mark the end of the fire season, and the coming of the cooler wetter weather”, he would tell anyone and everyone, “but it was vitally important for everyone to pay respect to fire and fireworks”. The event was a “privilege and not a right”, Peg heard once while waiting in the shop. She was surprised and amused to see her Pa mouthing the words in perfect unison behind the fire chief.

Hmm...I will never find them particularly endearing to look at. But I will always TRY. :D