Another Side of ANZAC 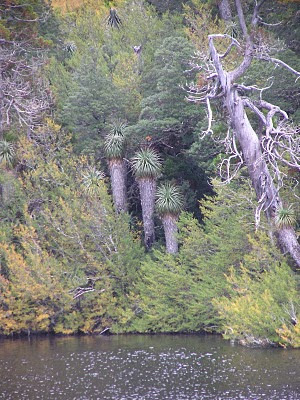 [Pandani surrounded by fagus that's begun to turn: Crater Lake, Tasmania]
[Some sideways thoughts on ANZAC Day, with a natural twist, of course]
While both occasions mean many different things to different people, for obsessive bushwalkers it’s a ripe time for extended bushwalking. So back in autumn 2000 I grabbed the chance for a long ramble in Tasmania’s Central Plateau. The area has been dubbed, without exaggeration, the land of a thousand lakes. I have written before about this part of Tassie at http://auntyscuttle.blogspot.com/2010/01/walking-with-ada-pt-1-not-lacking-in.html
What is less well-known about the Central Plateau is that it also contains vast stands of Tasmania’s only winter-deciduous tree, Nothofagus gunnii, better known as fagus. On that April walk we found this wonderland at the peak of the fagus’s autumn colouring. We were in a heaven of gently undulating rocky slopes dotted with lakes and covered with golden fagus. It was like a vast deciduous forest in bonsai form.
I couldn’t help wondering how many Tasmanians, let alone other Australians, knew we’d had this marvel on display here for the last 50 million autumns. Here in Dorothea Mackellar’s  wide brown land, clothed mostly in evergreen eucalypts, Tasmania had hidden this lingering connection with old Gondwana. On that long dismembered super-continent, deciduousness once ruled. Now only this faint seldom-seen echo remains.
It felt like finding a fragment of our connectedness with the northern hemisphere “main stream”. Had a lifetime of enculturation into the beauty myth of fall/autumn in that hemisphere led me to seek out a worthy expression of it here in the highlands of Tasmania? I wondered whether it was the same kind of desire to be recognised as part of the “club” that took young Australians and New Zealanders to Gallipoli in 1915. A disastrous battle on a Turkish Peninsula, as far from home as most Aussies and Kiwis had ever been, was to become a symbol of adulthood for the two young nations. And ANZAC Day – April 25th – has been celebrated by Australians and New Zealanders ever since.
As I thought about this desire to be part of the northern hemisphere action, it occurred to me that Gondwana and its forerunner, Pangaea, actually turned some of that thinking on its head. There was a time when all of the world’s now-most-populous continents were together here in the southern hemisphere. It is Europe and North America who have moved northwards, not we who have drifted south.
But regardless of the origins of my response to it, no amount of peak-bagging could compare with that Easter’s transcendent tramp through the fagus. And an ANZAC Day will rarely go by without me wanting to visit and pay homage to a botanical marvel that long pre-dates our recent attempts to show our worth to the world.
Posted by Nature Scribe at 13:07

I remember one Anzac Day 30 years ago when we climbed Collins Bonnet! We were new to Tassie and the cold mountain conditions, but it was exhilarating nonetheless, if not tiring! (I seem to remember I was 6 months pregnant!!). But many autumn trips in fagus since then have been our normal routine, but its never been 'routine' - just special! There's something about the rich, warm colours in our landscape that create a sense of joy and awe!

I will never forget Dad raving on and on about the fagus during the 'long drive' to Mt Field one autumn. We kids were ridiculing his enthusiasm a fair bit. But when we finally got there we were pretty blown away by it too.

I like the links you've made here Dad. Another take altogether on some of our more recent traditions.