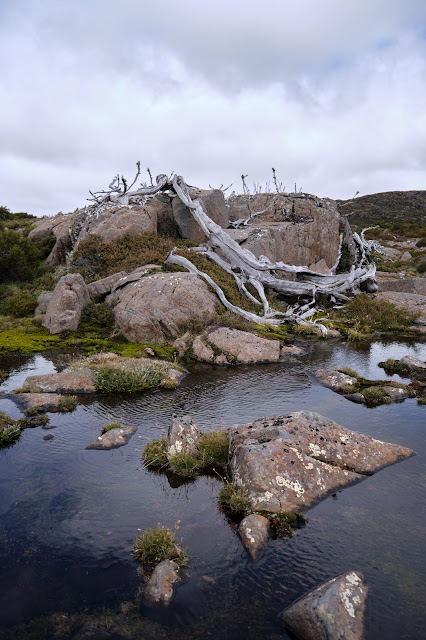 [A bleak and windy day on Tasmania's Central Plateau]
When it comes to bushwalks, there’s often a degree of cat herding. Dates, walkers, venues, vehicles and variations are all part of the mix. By the time those are settled, the weather for the walk can sometimes fall into the “like it or lump it” category. Certainly it would on this occasion.
Our planned March walk would see six of us back in familiar territory, walking from Lake MacKenzie across Tasmania’s Central Plateau, into the Walls of Jerusalem. Most of us had done it 3 years earlier (see here), and loved the country so much that we welcomed the chance to return. One variation this time would be a more earnest search for the elusive Ritters Track. Another variation would be our arrival times. We’d be wandering in like Texas Rangers. (If that doesn’t ring a bell, treat yourself by checking out the first 45 seconds of this incredibly cheesy clip https://youtu.be/r2F4K7nbcgs) 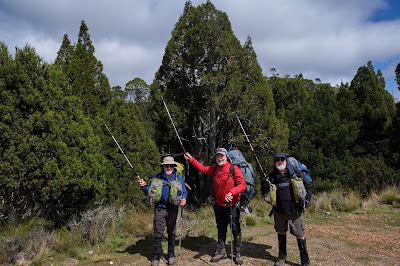 [Three set off from Lake MacKenzie]
Libby was the first “Texas Ranger”, having chosen to walk in a few days early, keen for some solo time, as well as to try out a new tent. Jim, Larry and I would come in next, and meet Libby at our Blue Peaks campsite. Tim and Merran would join us there a day and a half later.
One very neat variation was that Libby, Tim and Merran had already done a car shuffle for us, which would save Jim, Larry and me from having to leave a car at the Walls of Jerusalem carpark, and double back in another car to Lake MacKenzie to start our walk. So the three of us got going relatively early in cool, windy and sometimes showery weather. The weather was such that stopping was unpleasant, so we made good time and surprised Libby out of her tent mid afternoon. 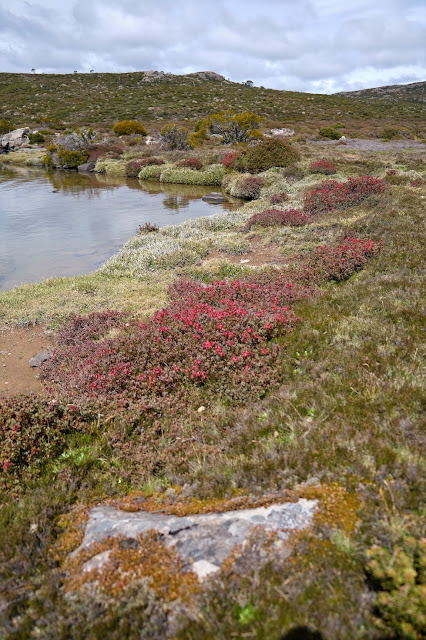 [Seeding mountain rocket bring colour to an overcast day]
She had tales of strong winds, sleet and even snow. She grinned as she explained she’d secretly been hoping for some snow. Nonetheless she had possum-wide eyes as she told us about the strong winds she’d had to deal with. (Her One Planet Goondie 1 had stood up to it perfectly.) By now the afternoon was a little calmer, and the two of us with Helinox chairs settled in for a comfortable cuppa, while the other two feigned indifference.
On that count we carried a secret with us. Libby was, for now, sitting in a Helinox Chair Zero borrowed from Tim and Merran. But those two late comers would be bringing in a brand new one. It was one that we’d all shared in purchasing for Libby as a Covid-delayed wedding gift. This, of course, was to be a surprise to her. So it was hilarious when, after dinner, as we stacked the two "undressed" chairs in bushes out of the wind, spontaneous comments about the chairs exhibiting mating behaviour began to come out. How long, we idly wondered, was the gestation period of a chair? Perhaps the next morning would be a little too early for the appearance of any offspring. But later in the day: who was to know? 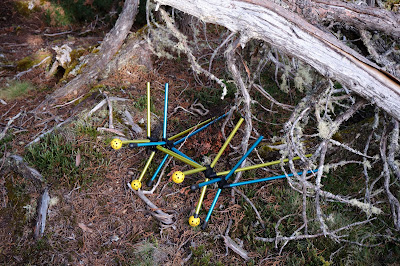 [The Helinox chairs getting "acquainted"]
Other excitements were to occupy us most of the next day. Neither Jim nor Libby had been to see the enormous cushion plant “colony” that Larry and a few of us had stumbled upon some years back. The weather more or less cooperated, and we set off towards that wonderfully small eminence, Little Throne. While we were winding our way around the end of one of the lakes, I was startled to find a tiger snake stretched out on some rocks over which I’d just jumped. It seemed little interested in moving, and we took our time to gawk at and photograph this beautifully marked creature. 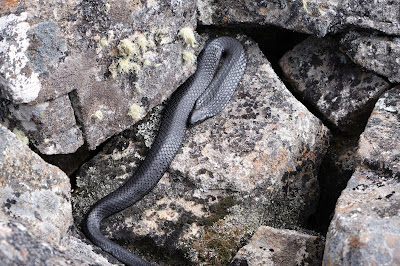 [A tiger snake sunning itself]
A little while later, from the top of Little Throne, we were able to message Jim’s wife with a picture of the tiger. She, being a notorious snake-phobic, sent suitably shrieky messages back, and we all chuckled at Jim’s tease. But not long afterwards I noticed Jim was not his usual jovial self. This became more apparent when he suggested that we might make this our turn-around point. We other three, all keen to see the enormous cushion plants, outvoted him. So he shrugged and reluctantly came with us. 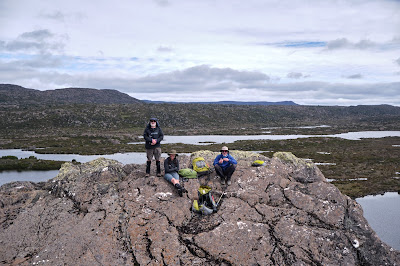 [Atop Little Throne]
I had a reasonable idea where we would find the cushion plants. However, not for the last time on this trip, I was glad to be walking with a navigational nerd. Larry had marked the spot on his GPS, and this saved us from wandering around too much before finding it. I’m not sure if it was the bleakish weather, or Jim’s bleakish mood, but there was not quite the excitement I’d expected in the presence of this botanical wonder. Still, we lingered and photographed at length what is still the largest cushion plant “forest” I have ever seen. 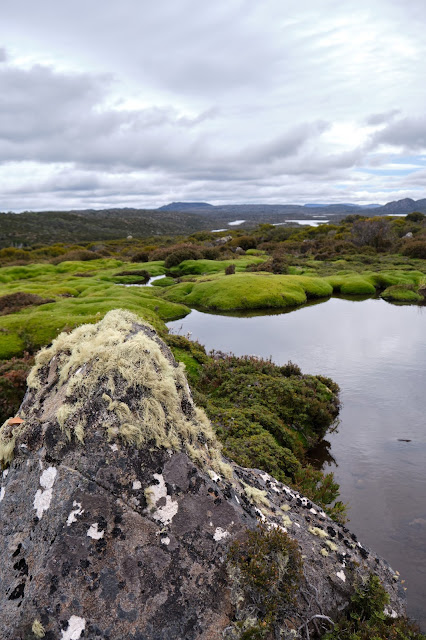 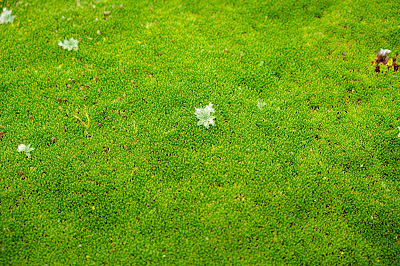 [There are often many species in a cushion plant community]
Although the rain held off, the weather was becoming cloudier and cooler. So we wasted no time in getting back to our campsite, this time taking the more direct route through the lake-dotted lower country. We had calculated that Tim and Merran wouldn’t be with us until around 7pm, and in this weather that looked like being well after our bedtime. We’d all eaten dinner by 5, so it looked like some of us might have to rug up and wait around for our friends’ arrival. Then, just after Jim disappeared into his tent, we were surprised to see Tim and Merran coming over the rise and into our campsite.
They’d managed to leave much earlier than expected, and had made good time in trying conditions. We gave them a bit of time to put up their tent, but before they’d finished cooking their dinner, the rest of us started ahemmming loudly. Tim, taking the hint, reached into his pack, and Merran handed over the gift chair to Libby. “They’ve had a baby” I called out, and we all laughed at the way our jokes had fitted so well with the timing of the gift. Libby was completely ‘rapt, not least because she wouldn’t now have to settle for a damp log for a seat. 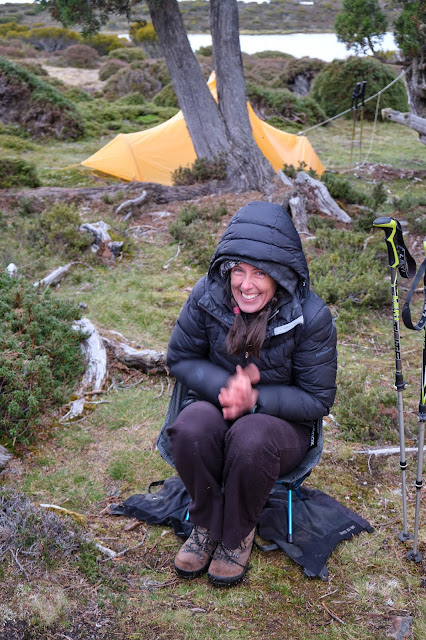 [Libby: a happy camper in her new chair]
And so we were all together at last. Tomorrow, we hoped, we’d all venture further into the Central Plateau. We knew, after all, that a Texas Ranger’s “work is never through”.
Posted by Nature Scribe at 15:39