Crossing the Plateau 1: Starting with the Known


So I am on the plateau again, having gone round it like a dog in circles to see if it is a good place. I think it is, and I am to stay up here for a while. – Nan Shepherd

How blithely we speak about mountaintop experiences, as though there’s nothing but serenity to be had on summits. Certainly I’ve experienced joy, and elation, and a good degree of satisfaction on getting to the top. But like most walkers and climbers I know, I have a dirty little summit secret. Even as I sit there my serenity is tempered by restlessness. I simply can’t resist planning where to go next.

That’s exactly what happened last December, when four of us sat on top of an unnamed mountain near Tasmania’s Blue Peaks. As our eyes scanned the wide horizon, they were magnetically drawn towards that other favourite walking area: the Walls of Jerusalem. How about we walk across the Central Plateau from Lake MacKenzie via the Blue Peaks and on to the Walls?

If that was the germ, the infection soon spread. Those who hadn’t been on that December walk all wanted in. Via email we discussed potential dates and other logistics. That’s usually where the drop-outs start happening, but not this time. While some of us had previously walked into the Walls from Lake Ada or similar, this exact route was new to us all. And no-one wanted to miss out.

The logistics of making this a one-way walk already required some mental gymnastics. Added to that two of our walkers needed to come in late on the first day, and leave a bit earlier at the end. So the plan was to pick up one of their cars and take it, along with one of ours, to leave it at the Walls carpark. That meant starting off in three walking groups, the car shuffle walkers, the non-shuffle walkers, and the late walkers. Confused? So were we, but it all worked out. 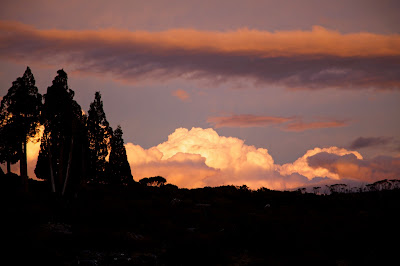 One of these times we’ll get to “our” Blue Peaks campsite and find someone already ensconced. (Note to self: stop extolling the virtues of this place!) Thankfully, given we were a large group, this wasn’t such a time. In dribs and drabs we finally got to the site, and settled ourselves for the adventure ahead.

If our minds had been ruffled by travel and logistics, the sunset from our campsite smoothed and soothed them. The stunning light show went on for nearly an hour, after which Tim D and I got down to discussing walking route options.

All involved the unknown, as well as the unnamed: that is the unnamed peak that was the site of the walk’s genesis. We traced a vague route on the map that would take us between Turrana Heights and the unnamed peak, then down towards Lake Lexie. After that things got fuzzier, with words like “southish” and “westish” featuring. But we did know that we were heading towards Mount Jerusalem, and that we’d have to dodge plenty of lakes and any thicker bits of forest or scrub. Tim’s other general thought was to stick to higher country, to avoid both bog and scrub. Given low water levels in the lake near our campsite, we figured boggy ground wouldn’t be much of an issue.

It was strange to be packing up to leave Blue Peaks the next morning, given it was usually our base for a number of days. Strange too not to know where we’d be camping that night. Internet searches hadn’t revealed a lot about our route, but then that was part of the adventure. We knew about a very old cattle drove route known as Ritter’s Track. But as well as it being south of our intended route, we also knew it was sketchy. And while there were sporadic cairns along the route, the ground trail itself wasn’t likely to offer better going than off-track walking. So off-track it was, firstly around our nearby lake, then off via Middle Lake and Little Throne Lake towards the unnamed peak.

Although slowed a little by carrying full packs where we normally took day packs, the going was easy, especially as the lakes were so low that we could cut across them at times. A couple of hours in, and just before the climb that would have taken us up our unnamed mountain, we veered “westish” and dropped down to a small, pine-encircled tarn. We were now officially walking where none of us had ever been before.

The weather was clear, the sky blue, and out of the stiffish breeze the day was growing warm. After a short scroggin and drink break, we hoisted packs and walked on towards the more sizeable Lake Lexie. We dodged around its long and sometimes convoluted shores, the shallowest of which looked like mud flats at low tide. Some parts had dried and cracked so much that they gave a convincing impression of a desert.

Towards the end of Lake Lexie we found a lunch spot that offered some shelter from the growing wind. As we ate we discussed how far we should walk before settling for the night. Opinion here was divided. Some were keen to start looking for sites sooner rather than later; others wanted to head as far towards Long Tarns as we could, knowing that late tomorrow the forecast was for rain and wind. The Walls themselves offered more shelter, if we could get there before that expected weather change.

Sometimes, however, a gift horse appears. And that was the case when we came to Pencil Pine Tarn. To my mind, it being only 2:30pm, this was a bit early to stop for the day. But once we’d wandered up slope to the pencil pine forest that had given the tarn its name, we all decided we’d be mad to miss the chance to camp here.

The beautiful, ancient-looking pencil pine grove offered superb shelter from  nearly every quarter. The site had obviously been used before, with logs and rocks arranged as camp furniture, and (sadly) signs of a past campfire. Apart from fires being illegal across this whole “fuel stove only” area, I shudder when I see signs of fire anywhere near these irreplaceable pencil pines. But I calmed down once I’d spent a few minutes among the pines, breathing in their rich, resinous scent. It seemed we had landed on our feet with this campsite.

Once we’d set up tents and tarps, Tim O and I declared we were going down to the lake for a swim. There were two surprises with that. Firstly everyone else said they’d do the same, and secondly the water proved to be only a foot deep, with the tarn bottom’s mud about the same depth. So our “swim” ended up being a hilarious exercise in getting both wet and muddy. At best we managed to float on our backs, propelling ourselves along like inept, over-sized otters. Still a wash is a wash, and even Jim – not a keen swimmer – stayed in the whole time. We all came out glad he’d made the effort, and more than happy to settle back in to our brilliant campsite.
Posted by Nature Scribe at 12:37