[excerpt/draft material from "the walking book"] 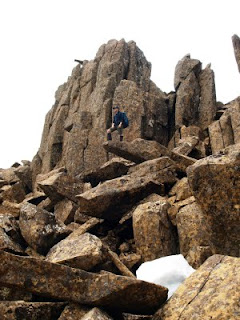 They could never get me to sing. My parents tried, bribing me to sing “Within the Shady Thicket” with my sisters to Christmas aunties with names like Beryl, Tress and Eva. “Jazz” Buck, our somewhat militaristic music teacher at high school tried too, although his trick didn’t work. He got the class singing to a record and then walked around the room tapping a few of us on the head. I was chosen, though whether for detention or something else I didn’t know until the choir list came out. Me, in the choir? At a boys’ school, at the age of 12 or 13? My ears reddened at the very thought of it, and I swiftly arranged for my mother to come and bail me out. It was one of the few times I knew she was truly displeased with me, but I was not going to sing.

The trouble was I could sing. And now, do I regret not singing, and not taking music further? Of course I do. It is one of the most heart-lifting activities I know and a way of expressing your soul that has few peers. But as a shy boy trying to make his way in a school full of robust, rugby-loving males, singing just didn't seem an option.

These days music is virtually everywhere in my life. I work to music; relax to music; cook to music. My love of music led me to review music and to present a weekly music show on radio. Music even goes with me when I walk. Sometimes that is literal, as when I walk to work attached to my iPod.

Failing that it is in the form of what I call “head tunes”. These may be the musical equivalent of mad voices and of possible interest to a psychologist. But who hasn’t had one of those annoying tunes follow them around unbidden and unwanted? The Germans have coined a very apt word for it: ohrwurm – literally “ear worm”.

More usually, and very thankfully, my head tunes are of the welcome variety: music that I’ve heard recently that somehow fits with what I’m doing and pops back into my head as a kind of soundtrack for my life. Just occasionally, usually while doing a hard walk, I will even make up tunes. I don’t set out to do this, but something about the ambulatory rhythm, and perhaps the pleasure/pain of what’s involved in walking, resolves itself into musical form. When I’m in the bush my spirit is lifted – even if my body is burdened – and it looks for ways to express itself.

This shouldn’t surprise us, when we think of the working songs that have always helped people of all cultures to get through their daily chores. In Scottish Gaelic culture some of these are called waulking songs. Waulking involved stretching and proving cloth by pounding it against a board or trampling it with your feet. It was carried out by groups of women in Gaelic Scotland, particularly the Hebridean islands.

After more than a decade of presenting a Celtic music program on local community radio, a lot of the music in my own collection – and so in my head – is Irish and Scottish in origin. There seems to be something very true and real about the songs, jigs, slip jigs and reels that typify the music of the Gaels. Perhaps because of its origins in the ups and downs of simple life in remote and beautiful places, it lends itself perfectly to the moods and rhythms of walking – just as it once did for waulking.

Thankfully some waulking songs, especially those of the Hebridean islands, have been kept alive. Contemporary world/folk musicians like Scotland’s Capercaillie and Canada’s Mary Jane Lamond are among those who have both preserved and modernised such songs. Capercaillie even managed to get a waulking song into the UK Top 40 charts with their 1991 version of “Coisich A Ruin”. The more recent “Mile Marbhaisg” on 2003’s Choice Language illustrates this was no flash-in-the-pan. Gaelic culture isn’t in aspic where Capercaillie is concerned. So in the above song (which translates “A Thousand Curses”), they somehow manage to combine a funky, danceable Celtic swing with what I’m sure are savage lyrics. And yes, it makes a great walking “head tune”.

The Scottish dance known as the strathspey is another example. Originating in the Scottish highlands – in fact in my clan’s home territory – it has a complex 2/4 or 4/4 “dotted” rhythm. The short “Scots snap” notes can make it tricky to follow, but as a rhythm to accompany boulder hopping in the Tasmanian highlands, I could ask for nothing better. The tumbling, near-to-tripping feel of hopping across dolerite scree slopes seems to have found perfect musical incarnation in the strathspey. I’m always accompanied by a strathspey – internally if need be – when bounding over boulders.
Posted by Nature Scribe at 09:09