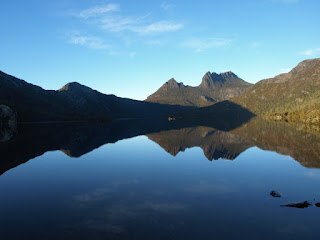 At 1545 metres, Cradle Mountain is Tasmania’s fifth highest mountain. That’s not particularly high, even by Australian standards. But by those same standards it is a delightfully shaped mountain, satisfyingly “peaky”, and justly famous for its lopsided twin towers separated by a hammocky ridge, the whole often reflected in the flawless waters of Dove Lake.

I’ve succumbed to the appeal of its summit at least four times over the last three decades. Each climb has been different, but the most recent was more eventful than I’d have preferred.

Three of us were there – with dozens of others – on a rarely-perfect October day. There had been so much rain over winter and early spring that the creeks here had begun to flow clear instead of their normal beer colour, the tannins diluted to the point of invisibility. And if it wasn’t raining, wind and snow showers had gone to work. But on this day the weather gods had put aside their tools and gone for a smoko.

The mountain draws many walkers, not all of them ready for the challenge. We passed a number of walkers having difficulties with the steep dolerite scree that leads to a snowy amphitheatre beneath the final tower. One couple chose, not unanimously, to be satisfied with the northward view from the scree rather than the 360 degree summit vista. While there is nothing technically difficult about any of the scree, it does involve a certain amount of rough-house hauling of yourself up fridge-sized boulders. The contrast with the duck-boarded approach walk is too stark for some. On the other hand the dozens heading for the summit this day included children as young as seven or eight.

Once over the hump of the scree approach, there’s a steep side-slope to traverse. Except in the height of summer there is usually some snow here on the south-east facing slopes, over-towered as they are by tooth-like pillars of dolerite. The day was mild and sunny, so at this point the metre deep snow was soft and slushy. We took out trekking poles to help with balance and gingerly began to cross the side slope.

A year ago, almost to the day, I had paused here with my son and sons-in-law to slide down the forty degree snow slope in our wet weather gear. The few seconds of exhilaration had to be backed up by a far longer and more tedious slog back up the slope. Twice was enough for me, although some of the next generation tried it a few more times.

This time we were intent on the summit, so we by-passed the obvious sliding section. I was in front, and began to head up the very steep climbing chute, choosing to go to the left of a large rock. I remember gripping the rock with both hands, although one must have also been holding the trekking poles. From that semi-fixed position I kicked a step into the snow just beneath the boulder, and tested it briefly, before trying to heave myself upwards.

The step held only until I put real weight on it, then gave way, sending my left foot a metre lower than I was expecting it to be. That ripped my hands from the rock, flipped my feet skyward, and sent me careening backwards down the slope. I completed a one and a half backward somersault, landed on my back, then slid head first down the chute at what might have been described as an exhilarating pace. Did my life flash before me? Did I pray, or fling my arms over my head for protection? I quite honestly didn’t have time to do anything more than to think “Oh ... my head is likely to stop me by hitting a rock!” I’m not even sure an expletive popped into my mind, although I can think of a couple that would have been very suitable.

After a very rapid slide of maybe 25 metres, I stopped quite suddenly as my back – thankfully cradled by a day-pack – crashed into a suitcase-sized rock. I lay there, for the moment pain-free, thinking “ooh – I think I’m alright”. I then conveyed the same in response to Jim and Tim’s yelled query. Their next shouted words disconcerted me. “Don’t move!” Spinal injury? A huge drop just beneath me? No. “Gotta get a photo!" followed by “Bugger! Wish we’d got that in movie-mode.” Then I knew I was going to be okay.

A few careful minutes checking myself, talking with the boys, and righting myself, was followed by an extra cautious crawl up-slope to the start of the climbing chute. Twenty minutes later we were out on the summit - the sun shining, the breeze a mere zephyr - with me yabbering nineteen-to-the-dozen as you do when the adrenaline kicks in after even a mild shock.

And at the end I had no badge of honour, not even a decent bruise, to show for my troubles. Being joined on the summit by three youngish girls and their family seemed to underline that we had done nothing even slightly heroic. I think I can get over that. Two days later, such thoughts are already being replaced by a strong thankfulness that I was somehow cradled during my fall. I will live to walk another day, God willing!
Posted by Nature Scribe at 12:46

I love it ! Wish I'd been there mate - you can be pretty sure I would have had the movie-mode turned on :-)