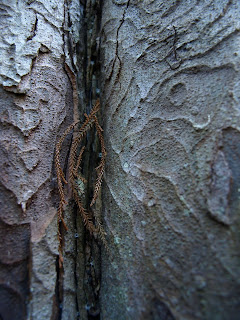 [written following a visit to the central North Island of New Zealand, September 2009]

Place names can ring like a bell, although the reasons for this may vary. I once lived near towns whose names I delighted in reciting: Cookamidgera, Mandagery, Mugincoble. The last, pronounced “Muh-JINK-a-bull”, was also a railway town, giving its nomenclature an onomatopoeic perfection.

For passing generations, Passchendaele and Pearl Harbour evoked the opposite of delight, and for some of my generation Lake Pedder still carries a plangent, melancholy note. Across the Tasman Sea Lake Manapouri and Whirinaki Forest sound all the sweeter for what might have happened there.

Whirinaki (the “Wh” is pronounced as a “F”) has long fascinated me. But it is early spring 2009 before I am finally going there. 25 years have passed since the logging ceased. It’s a clear and sun-filled day, and I’m in the company of Joe Doherty, a respected elder of the local Ngai Tuhoe Maori tribe. He and his family run Te Urewera Treks here in the eastern Bay of Plenty area, in the central North Island of New Zealand. Today I have Joe one-on-one.

On the drive up he is as happy speaking about his Irish ancestry as his long and local Maori heritage. But when we reach Whirinaki, the first thing he does is stop and pray in Maori. Or at least that’s my take on the Maori invocation or karakia. He pauses at the forest portal, explaining that he will acknowledge the creator and the spirit of the forest, and ask them to welcome us to this place. His voice is deep and his tone reverent, but the words scarcely penetrate the forest, seeming to be absorbed by the foliage.

We step into the ancient podocarp forest, once dubbed a dinosaur forest by David Bellamy because its ancestor trees were around in the Jurassic. If Joe’s prayer hadn’t already done it, the still, quiet and darkly green place would have quickly awed me. Great vaulting trunks of rata and rimu; matai and miro; totara and kahikatea burst from dense and deeply green fern glades. The sometimes fissured trunks are covered with delicate-leafed creepers and climbing ferns; the upper branches festooned with hitch-hiking epiphytes.

When Charles Darwin first stepped into a Brazilian rainforest, his breath was similarly taken away. “Sublime devotion (was) the prevalent feeling”, he reported, describing:

For us there are no butterflies, but the hosannahs of kaka cascade down from the tree tops, part parrot-scratch, part song-bird melody. All else is muffled – our footsteps, our conversation – as though in a cathedral. As Joe quietly explains his karakia, it confirms my sense of its closeness to prayer. Surely part of prayer is a humbling and grateful recognition of powers far greater than the human.

I pause to wonder why I, as a Christian, do not stop to make this sort of acknowledgement in similar places. Walking through this botanical wonder, I also ponder how Christian notions of sin might apply to the destruction of the great majority of New Zealand’s podocarp forests. In 1947 the New Zealand Forest Service saw it in different terms, summing up with chilling pragmatism that "dairy farming demands such land (and timber) in the national interest and kahikatea forests are therefore impossible."
Against such a backdrop Whirinaki is a miraculous survivor; a virtual tree museum in national terms; a small arboreal throw-back. Today it is surrounded by a vast acreage of pine and eucalypt plantation, tree farms that deaden mile after mile of the drive down SH1 from Auckland to Wellington.

I first drove that road in the early 1970s, a wide-eyed and gormless Australian student on a fleeting visit. But even then I had a sense that the heart was missing from this countryside. Here in Whirinaki, 35 years later, might I have found its still-beating pulse? Here at least, the wonder of water and soil are still in the service of what has grown and flown here since the dinosaurs. As Joe tells me about the long human connections here, the picture widens. I gain a glimpse of a living system of plants and animals; humans and landforms, that indicate it’s even more than just the botanical heart of New Zealand’s North Island. We can have a place in the forests too. Darwin’s hosannah fits Whirinaki.
Posted by Nature Scribe at 17:14

How beautiful to hear of the way Joe effortlessly lives the spiritual life in the physical world. Perhaps one reason that Christians like us "do not stop to make this sort of acknowledgement in similar places" is because our faith developed in the British Isles in a kind of opposition to "the wild". I strongly suspect a cultural aspect too - we Australians are not prone to being overly demonstrative. We do not "wax lyrical" about the things that REALLY touch us. We tend to go quiet instead. And it is in that silence that some of us have the ability to capture memories in our hearts and minds, and even fewer still can put pen to paper and dare to write about it.