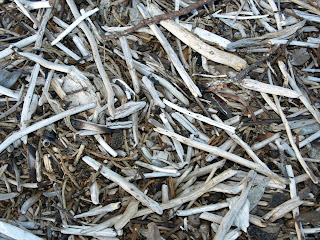 A weak sun lit the campsite. Fresh animal droppings were the only obvious sign of visitors. Henk leaned out of his tent to look beyond the patch of forest and into the scrub. The dewy bushes were draped in careless strands of web. To call them spider webs would be to make a silk purse of them. There seemed no pattern to them, let alone the perfect spiral symmetry spiders were supposed to have embedded in what passed for their brains. Instead every branch or stem seemed to be connected to the next by this random optimism of a million spiders. And it worked! The webs obviously worked, because every path Henk had taken to get there was criss-crossed with spider strands.

He’d come to realise that in this country, messiness worked. Or at least what he had taken for messiness. Every square yard of the bush was literally crawling with life. It didn’t fit with European notions of beauty, but did that make it ugly? This beholder's eye had come to see its sly beauty. He appreciated its wild fecundity, every prickle, stick or bud with its own grace and purpose. Time and isolation the parents of unique and ingenious survival.

Most of his own people had never seen this. From Abel Tasman on they had really only been visitors. Even those who lived a lifetime here had been tourists not natives. And they had brought up their children in the same way. But the Dutch weren't alone in this. He thought of the English. Hah, the English! Who looked on eucalypt forest as grey, monotonous and fearful. Those early explorers were tourists too, hating the bush for not being park-like, for not having the deciduous beauty of their motherland.
He wondered if they had ever seen, really seen the spring blush of new leaf tips on the gums. Golden on the bluegum, ruddy on the stringybark. Strong, vibrant colours whose only mistake was not to fall to the earth in one season. If they wanted autumn colours, had they never seen the riotous hues of a freshly shed trunk? And what of the sights and sounds of the forest’s multiculture of birds, insects, bats, marsupials and reptiles? Had they seen or heard that? Or had they smelled the heady tang of wattle and sassafras in spring; the clean bite of freshly fallen bluegum leaves; the indescribable pungency of wet earth after a long dry?
Posted by Nature Scribe at 14:08

I like 'the dewy bushes were draped in careless strands of web. To call them spider webs would be to make a silk purse of them.' and 'This beholder's eye had come to see its sly beauty. He appreciated its wild fecundity, every prickle, stick or bud with its own grace and purpose.'