To Have and to Hold? 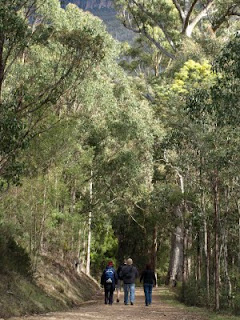 [Photo: getting to know our local Hobart bush]

[some experimental thinking about loving the environment]

Acquisitiveness is one of the besetting sins of the 21st century. Our desire to acquire, buy, possess, consume, seems out of all proportion to any actual need we have. As Sir Paul McCartney put it early post-Beatles: Buy, buy! Says the sign in the shop window. Why? Why? Says the junk in the yard. This acquisitiveness extends well beyond our spending patterns, and into a consumptive attitude towards things that money can’t buy. It seems that making lists and ticking them off is inherently satisfying to us as humans. So twitchers tick off birds; hikers tick off peaks; trainspotters tick off trains; more than a few of us even tick off relationships.

Sociologist Zygmunt Bauman has described contemporary life as "liquid modernity" (a metaphor for the never-static, always adapting nature of contemporary living). It is based on the idea that, whereas Modernity (ie. from the Industrial Revolution) was fuelled by production, Liquid Modernity (others say Postmodernity) is fuelled by consumption.

Bauman mentions many sites of consumption: experiences, hobbies, relationships. He focuses on the fact that liquid-modern consumption is not based on subsistence, or on need, or even on want, but on desire. He talks about desire having an almost spiritual force – “desire desires desire" – to illustrate the way in which it isn't the goods of consumption that drive us to consume; it is the experience of desiring them. For example:

Bauman also differentiates love from desire. The latter “is an impulse to strip alterity of its otherness; thereby, to disempower.” (p9 of “Liquid Love” – Polity, 2003). “Love is, on the other hand, the wish to care, and to preserve the object of the care. A centrifugal impulse, unlike centripetal desire.” (p9)

One implication of a consumptive attitude is that the object of our desire is disposable once acquired. “Desire desires desire”, so once the thrill of the chase is passed, we lose interest and move on. It’s not actually far-fetched to think of a mountain, a district, an ecosystem, a species, as disposable given the way we presently treat much of the natural environment.

So what to do about it? How do we counter this strong and potentially destructive trait? That word desire is central in this context. Much Buddhist philosophy focuses on the undesirability of desire. And desire would seem to be the villain in this case. If we can only cease to desire, we will overcome its negative force, personally as well as environmentally.

Notwithstanding the many attractions of Buddhist thought, I remain stubbornly persuaded by aspects of Christian thought here. Consider the following extended analogy from another arena in which desire runs deep: human relationships. In some Christian marriage rites – the Anglican and Roman Catholic, for instance – a couple will give themselves to each other with the words “to have and to hold”. The words, with their overtones of possession, seem to pander to desire, and to our acquisitive side. That disposable relationships all-too-often result seems to say little in favour of “having and holding” as a model for anything. But I want to argue that one of the geniuses of marriage, in its ideal, is that it is a covenant of mutuality. What one asks of the other, one also promises to give.

What would it be like if humans made a covenant with nature that was genuinely mutual? If we gave ourselves to the natural environment “to have and to hold”, and only then asked the same of it? If we took what we needed from the environment only because we had covenanted to give back in generous proportions. Anyone in a marriage-like relationship will know that the give and take is never precise and equal. But in good relationships there is a desire to look out for the other, knowing that the other is looking out for you. That is surely a central aspect of love. So rather than trying to knock over our desire in relation to nature, this model would ask for a loving, mutual and generous attitude towards nature.

Extending the analogy, it seems both appropriate and necessary to particularise what we mean by nature; to narrow the covenant down to a particular place or set of places. This will usually be our own local district, with all of its particularities of rock, water, soil, flora, fauna and form. This specificity will nail our colours to the mast, and prevent our love of nature from ranking alongside such vague niceties as wanting to end world poverty.

Loving your own district first doesn’t exclude you from loving other places any more than a healthy loving relationship stops you from loving other people. But it does mean that there is a primacy of love and loyalty to that home place, to your place (and I use the possessive advisedly, and in the mutual loving rather than purely possessive sense). One implication of this is that it acknowledges what many peoples – especially indigenous peoples – sense. And that is that a place, a land, can actually own you.

In his marvellous book “The Secret Life of Trees”, Colin Tudge talks about the indigenous mateiros of the Brazilian rainforests. They know and recognise hard-to-identify tree types in much the same way as most of us know and recognise a family member. Even when expert botanists fail with identification, a mateiro will not. That is the kind of familiarity with – and indeed love of – place that is likely to make you its strong advocate.

So loving your own place means that you take real notice of it; you know what fits where; you know what is happening from season to season; you chuckle – and possibly grumble - at its little peculiarities. But you love it! You rejoice in what it gives to you and yours. And because your covenant is mutual, you also give back to the place. You become its advocate and its defender from outside threat.
Posted by Nature Scribe at 13:18

Nice! You been reading Ziggy? Kudos! My whole thesis was on Liquid Modernity ... and how it relates to beer consumption in Oz. So if the theory can stretch that far I think it can manage to incorporate consumption of natural places.

I remember planning a walk through the Pelion/Du Cane ranges when I was 15 or so and literally adding every mountain we saw on the map to the "we're gonna climb it" list... Maybe maps are too convenient? Needless to say we climbed Ossa and Oakleigh, then limped all the way home!

Thanks Stu - I wrote this piece while in Dunedin in 2006. We'd been emailing each other about Ziggy (among other things). I think you'll find the second paragraph is pretty much word-for-word what you sent in one email. It resonated very much with some thinking I'd been doing about peak-pagging and twitching, and I ended up borrowing some Bauman from the library.

Thanks for your help back then & your encouragement this time,

what a beautiful analogy to describe how we should care for and relate to nature!!
- ooh ... and I loved Stu's comment too!
(I love both my men!!!)
love
L xxxxx (and mum)