[an excerpt from "the walking book"] 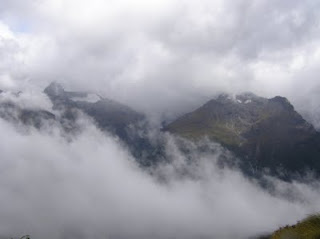 [a break in the weather?? Hollyford Face, Routeburn Track NZ]


“Everybody talks about the weather, but nobody ever does anything about it.” - Charles Dudley Warner

Keeping the rain off while walking has been a puzzle for humans for a very long time. Tasmania’s Palawa people used to smear their bodies with whale or seal fat. It offered protection from both weather and insects. Mixed with ochre or charcoal it doubled as personal decoration. New Zealand’s Maori made a water resistant cloak called a pākē, using plant materials. Strands of raw flax were buried in the ground for some months to season, then woven very closely onto a plaited-fibre support. Alaska’s native peoples discovered long ago that seal guts could be expanded by pumping them full of air. Once dried, this membrane could be sown into garments that were remarkably good at keeping out rain and snow. Some even had hidden seams to prevent leaks – the original waterproof parka.

In my earliest bushwalking days a japara coat smeared with oil (the so-called oilskin) was the vaguely higher-tech version of those indigenous rain protectors. Oilskins were developed in the 19th century when sailors discovered that their sails could be waterproofed using a mixture of whale oil and linseed oil. Wave a jar of the 1970s oil under my nose and I am instantly transported back to my early bushwalking days. Like most bushwalkers of the time I was outfitted at the nearest army surplus store. Fashionable outdoor gear was an oxymoron back then. I covered my legs with oversized khaki woollen trousers, and in very cold conditions even wore woollen long-johns underneath. On top I wore a drab woollen jumper over a checked woollen shirt. Footwear comprised ex-army boots, woollen socks and canvas gaiters. I often added a hand-knitted woollen beanie, replaced later by a genuine Scottish tam-o-shanter (woollen, of course). By the late 1970s I had graduated from a khaki canvas A-frame haversack to a khaki canvas H-frame haversack. It still hangs in my garage, just in case.

Amazingly japaras are still around – in shops, not just in garages – although the new ones don’t require oiling. I gave mine up years ago and graduated to the “miracle fibres”. I got my first Gore-tex lined jacket in 1990. It took faith to believe that an invisible film of Mr Gore’s material – sandwiched between the outer and inner layers – would repel water droplets while allowing vapour to pass away from the body. I only dimly understood how it was supposed to work, but I did love to hear the salesman talk. I parted with more money than I could afford for that first generation Gore-tex jacket. Within a few years the same salesman pooh-hooed first generation jackets (“they had problems” he confided), and tried to sell me the second-generation version. I put up with the “problems” (you got wet when it rained) for a few more years. But when the third generation came along, I again parted with a week’s wages to try and stay dry while walking.

With about 40 years of bushwalking behind me, and poised somewhere between an H-frame and a zimmer frame, I have come to a slow-dawning realisation. The Holy Grail of rain jackets – one that is both waterproof and breathable – has yet to be found. If you simply stand out in rain for an hour or two, most rain jackets will keep you dry. Those with poor seam sealing will eventually let in water, but most will keep it out. That’s fine is you want to stand still, but put a full pack on your back, and strain and sweat uphill in driving wind and rain for a few hours, and the story will be different. No matter how waterproof the jacket; no matter how breathable the material, your perspiration, particularly where your straining back rubs against the pack, will eventually condense and start to get you wet. And then all you’ll be able to do is envy ducks until you reach shelter.

A walk on New Zealand’s Routeburn Track one spring, wearing an ageing 3rd generation Gore-tex jacket, provided ample support for my theory. The first day’s walk was actually a blissfully dry stroll, and the rainjacket remained stowed. We wandered up the uncannily blue, glacier fed Route Burn, through forests the spitting image of Tasmania’s myrtle forests. Our day ended at the spectacularly situated and rather palatial Routeburn Falls Hut, with balconies hanging over a steep and beautiful valley surrounded by sharp mountains and waterfalls. That evening, while taking in those breathtaking surroundings, I didn’t immediately make the connection between high stream flow, gushing waterfalls and the kind of weather needed to supply them.

But the next morning as we woke to the sound of wind and rain, and the sloosh of soggy snow sliding from the roof, we knew we were going to find out the hard way. From the falls the track takes you up over Harris Saddle (1255m) and into the truly alpine section of the walk. But on this day we could only guess at the height of the mountains around us, although having to walk in snow through an avalanche zone hinted at the precipitous nature of the slopes. The cloud lifted enough that we could at least see the delightfully dark Lake Harris, and swirling mists occasionally parted to reveal snow-dappled peaks. But for much of that day, all we knew was that somewhere out there through the rain, sleet and snow were the wonderful Darran Mountains, a beautiful woman veiled, where only the occasional flash of her eyes insinuated the whole.

We passed a guided group, guessed their leader by his gear and confident air, and I asked him to tell us what we were missing. He smiled through the rain and pointed to where Mt Tuteko should be, laconically adding “she’s beautiful, that one. Nearly 2800 metres.” I took his word for it and retreated under our hoods. After half a day of this I had begun to feel like a Gore-tex felafel. I plodded and sloshed, and puffed and strained, with water underfoot, water in my boots, and eventually, miracle membranes notwithstanding, water down my back. Waterproof and breathable proved to be relative terms out here.

Yet somehow I found this perversely enjoyable. We were out in pretty adverse conditions, but we weren’t keeling over. Despite all of those motherly and grandmotherly warnings to come in out of the rain, I was reaffirming that the stuff doesn’t actually kill you. Having been wet in four continents, having worn everything from a cheap plastic ponchos to the latest hi-tech coats, I was finding out afresh what ducks, our ancestors and Christopher Robin have known all along. Splashing about in water can be quite good fun. Of course finding a hut, putting on a set of dry clothes, and imbibing a hot drink help to keep it that way.
Posted by Nature Scribe at 12:49