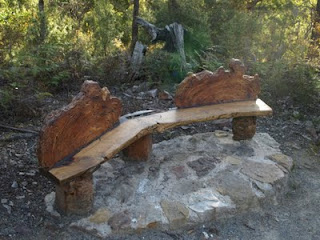 The landscapes we inhabit, the places we live, are not the simple, fixed things we sometimes take them to be. So called solid rock might have its origins in a slow and capricious accumulation of fine sediment. It may have gone through aeons of dark depression; ages of lethargic uplift and tedious down-wearing. Only then might its brief era in the sunlit lands have come.

On another time-scale altogether, a cicada that sings its way through a summer's day might have spent 7 long years beneath the ground before reaching its final flighted form. And that form will last just a few days, given favourable weather and luck with predators.

In childhood my friends and I were sometimes predators unaware. We would seek out the shilling-sized cicada holes in our lawns and flood them to try and bring the insects out. We reasoned that all those years in the nymphal stage wouldn't be hurt by staging a bogus summer flood. And up they would come like spirits from the grave - scarcely in the same form as the creatures they would become. A stiff but sodden brown caul held them prisoner still.

Yet given time and careful handling some of them would dry out and gradually begin their amazing metamorphosis. We would never tire of this unveiling, fascinated as much by the metaphysics as the physics, even if unable to articulate it. When it was all over we took the empty shell as a talisman.

The hiddenness of the world around us can sometimes yield to science - even such blundering childhood science. Careful observation and judicious reading can peel back the layers of familiarity with which our world disguises its wonders. But science will never reveal all. When we think about the places we know and love, it is obvious that the sciences neither encompass nor describe them with anything like satisfaction. Time and again they slip out of the lasso of logic, running free in some parallel universe of their own.

Yet notice how we can be transported instantly back to such places by a sound - a bird call, a radio song; or by a scent - whether rare perfume or mere insect repellant. The world's hiddennness can be revealed in many such unexpected ways.

While science may sit uncomfortably with such revelations, the arts are quite at home. They can play a role in interpreting places that science can't. From the arts poetry may still flow when prose has dried up. By this I do not mean to imply that science is solely for the head and art purely for the heart. Both speak to the intellect. Still we might expect the arts to speak more to the emotional side of our intellect than the logical side.

In hosting the Dombrovskis Wilderness Residencies, the Tasmania Parks and Wildlife Service is recognising that we need to be aware of not only the science but also the art of place. These are different ways of seeing, but they can be complementary rather than conflicting. The arts in all their forms can help to give a more complete picture of the places that inspire us.

Although the tryst between artist and place is an ancient one, it is not necessarily well understood. Nor is it predestined to succeed. Special places can remain mute, and artists uninspired in the face of much-anticipated encounters.

In the 1940s E.H. Burgmann, Anglican Bishop of Canberra/Goulburn, reflected on the special places of his own upbringing. He likened a forest at dawn to a baby stirring out of sleep.

"Presently the babe is fully awake and all the dwellers of the bush loose their tongues. Bellbirds, whipbirds, and all sorts of birds enjoy their songs, and as they make high festival the lyrebird can mimic them all. Nature must be taken as a whole. It speaks through its birds, it lives in its animals; man can only join in on Nature's own terms. He can sit and listen and let his fancy run free. He will grow more reverent as his sensitiveness to the presence grows. He will feel privileged to have been admitted into the audience of Nature's moods. Birds and animals may even come to feel that he to some extent belongs to their exclusive world.

It is foolish for man to think of Nature as below him. If he lives in the bush long enough he will find that reverence is the only worthy attitude. But the bush will take its own time to do the work. It will not speak to a man in a hurry. Its message is worth waiting for. Only the soul that is stilled in its presence can hear the music of its song." (E.H. Burgmann, The Education of an Australian, Angus & Robertson, 1944)

The works represented in this exhibition are the result of hard labour. We should never so romanticise the arts that we imagine works dropping from the sky fully-formed and ready for display. But neither should we imagine that such works can be mined from the cosmos through sheer perspiration. If Bishop Burgmann is right, it may take a great deal of patience; a willingness to listen; a capacity to be still. Such openness is a kind of spiritual labour.

The places these artists have lived and worked in have demanded much of them. Some have found that there is more at stake in this stilling of the soul than the generation of mere amusements. The best of the works represented here are the beginnings of a great labour. It is a labour that wills to find a place for humans in relation to the natural world; and to see what of lasting significance can be attached to human existence.

It involves effort because wild places can overwhelm us by their seeming indifference to our existence. Every day that the cosmos confronts us with our insignificance; every morning that finds us trapped between earth and sky is a reminder of life’s paradox. We are of the earth, yet we are spirit; mortal yet longing for immortality; impossibly small yet aching for significance. Through art - among other things - we seek to explore this spiritual paradox. We look to somehow say “yes” to the cosmos; to make life significant.

Early in the Christian era saints withdrew to the desert wilderness to hear more clearly the voice of God. These hermits - the word derives from the Greek word for "desert" - often preserved a clearer view of what life was truly about than their sophisticated urban peers. In saying “no” they found their “yes”. We would do well to hear what answers these artists have brought back from the wilderness.
Posted by Nature Scribe at 20:54