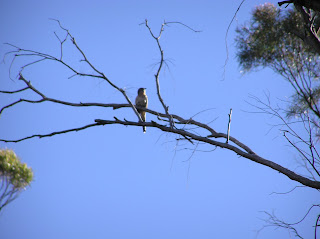 [a new piece reflecting on birds, people and life in general]

"Science may have defined life too small" - Rachel Remen

Is the natural world indifferent to humans? Is it merely a blank canvas on which we project our thoughts and feelings: things about which it is both oblivious and unconcerned? Or is there a little more to our place in this world than to be mere passive observers?

Anthropomorphic projection shows up in talk of wallabies “browsing happily” or of march flies “buzzing angrily”, even if such talk has scant basis in science. Those creatures do what they do for their own good reasons, and human emotions like happiness and anger probably have little or nothing to do with it.

Why then do most rational humans NOT resist the tendency to project their thoughts and feelings onto the world around them? Does a mountain really “glower defiantly”? Was Mt Everest actually the “bugger” that Hillary called it?

One spring I was tormented by a particularly fraught decision. It kept me awake – or woke me up – at all sorts of hours of the night. Our local bush was so filled with fan-tailed cuckoos that it became my cuckoo spring. The male cuckoo has a strong whistling trill which carries great distances in the bush, alerting female cuckoos to both his presence and his potential.

The trill has a melancholy downward trend. But there I go again, using a word like “melancholy” where it rationally may not belong. When I consult bird references I find that I am not alone. They variously describe the call as “mournful”, “sad” or “plaintive”.

But does a cuckoo feel sorrow? Surely this usurper of other nests has no such feelings (or so the anthropomorphic argument might go). All I know is that I have always felt a tinge of sadness on hearing the first cuckoo in spring (to follow Frederick Delius). To add to this my own mother died one spring, and I strongly remember hearing cuckoos in the months that followed. Even as a man in my fifties, my own sad reflections included thoughts of being alone in the nest.

During that cuckoo spring, an increase in their population meant there was a great deal of competition. I assume that’s why one young cuckoo – I came to think of him as the apprentice cuckoo – trilled all through the night. Apparently they occasionally do this, but it’s the first time I’ve been fully awake to experience a bird calling right through the night. I found my own melancholy magnified by the L-plate trill of my apprentice cuckoo.

His voice would stumble, miss a few steps of the ladder, then break off half-way – so much like an adolescent boy that I smiled in amusement despite my troubled state. He kept up these faltering efforts all that night and much of the next. I covered my head with a pillow, but still found my amusement turned to grudging admiration. Had I known more at the time, I would have listened for the shorter “chiree” response call from the female birds. That might have signalled that his yearning persistence was paying off, winning him a mate. I will never know whether his departure signalled success, or simply that he had left for a greener tree beyond the reach of my ears.

I realise now that I always feel a frisson of sadness in response to certain bird calls. The tawny frogmouth’s eerie night-time booming; the spotted pardalote’s downward drooping, double-noted “pee-paw”; even the forest raven’s “lascivious” carking has a world-weary downward inflection. Part of the science here may be that downward trending music has – for humans – an inherent sadness, just as human crying and wailing usually have a downward inflection.

But do bird calls, like human accents, also in part reflect the environment in which they develop? Let’s face it, much of the Australian environment is far from the “green and pleasant land” of England, for instance. If this is true, then the equation becomes: a harsh land = harsh accents. If life is no walk in the park, should we expect sweet voices?

All of this may be a partial explanation – even some justification – for anthropomorphism. But I think there is something more going on here. Our major tool as human beings is our use of language. We use words to make sense of each other, to put order on our society and on the world around us. We even invented metaphor to enhance distinctions and draw comparisons. And at our most basic we simply tell stories – and always have.

Some of those stories will project a character on landscapes, birds and beasts. I have heard such stories from the Adnyamathanha people in the Flinders Ranges. Their tales are peopled by the animals they see all around them, and each animal carries a metaphorical as well as a biological cargo. So when an Adnyamathanha child sees a crow, for instance, there are several stories, with in-built moral lessons, that the child can “read” from the crow.

Granted this is not “scientific” knowledge of the corvus genus. But it is knowledge nonetheless, and it carries a truth that works. Because one result of such story-telling is a caring for crows, and an identification of ourselves with them as co-creatures in the world of nature.

Perhaps in my cuckoo spring, I was story-making in my own way: preferentially taking note of cuckoos rather than kookaburras. Hearing and identifying with the yearning and sadness in the call of the apprentice cuckoo. Sometimes you just don’t have ears to hear the kookaburra’s laugh.
Posted by Nature Scribe at 16:24