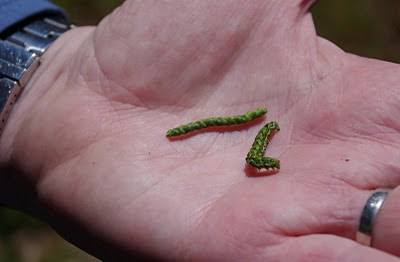 [Sometimes ideas just drop into your lap!]
Most of us, I think, are gormless when it comes to noticing species other than our own. Occasionally we may swat a fly, pat a cat, spot a bird or catch a fish. But take us into the bush, or even into our backyard, and ask us to describe the lives of the creatures that share those spaces with us, and our tongues will fall flat and still.

After spending some time among pencil pines this summer, I decided to read up on these marvellous Tasmanian conifers. I have written a little about them here http://auntyscuttle.blogspot.com/2010/01/walking-with-ada-2-great-pine-tears.html

But as wonderful as the species itself is – especially en masse – my ignorance of its broader place in montaine ecosystems was demonstrated by something that literally dropped into my lap. After a sweltering day climbing to a remote campsite high above the Overland Track, I was enjoying the shade of a pencil pine tree when a small green pine needle fell onto me.

And then the “needle” curled itself and raised its head! It was a caterpillar. It bore an uncanny resemblance to the articulated, overlapping platelets of a pencil pine needle. This appearance is both a protection and a convenience, as the larva of the pencil pine moth (Dirce aesiodora) feeds exclusively on the needles it so closely resembles.

Even when it metamorphoses into moth form, it will still spend most of its life in and around pencil pines. Found at altitudes of 1000m and above, the pencil pine moth must shelter from some of Tasmania’s wildest and wettest weather. Where better than in the pine groves that are so well adapted to these conditions?

Both the tree Athrotaxis cupressoides and the moth Dirce aesiodora have been surviving such weather for a very long time. In fact both have lineages dating back to Gondwana. In a kinder world we might doff our hats in respect to these ancient wonders.

And that is just one moth species, associated with one tree species, in one small altitudinal band of one small island. To scratch the surface of our ecosystem ignorance is to uncover another multitude of questions. But how vital that we keep asking those questions, rather than dying in ignorance – and taking whole ecosystems down with us.
Posted by Nature Scribe at 15:08

I doff my hat!
to this amazing creature
and to you, for writing us into its world!
(did a double-take on the photo)
LG

So, Mum, been using Dad's new computer at all?!

I too did a double take on the photo.

I was thinking about a similar issue recently. A local was trying to explain some Victorian geography to me, and I was comforting myself and excusing my ignorance by suggesting that I've only lived in Victoria for 7 years. Until I realised that I probably couldn't explain much about Tasmanian geography either! I think sometimes we just move far too fast and don't take enough notice. That's where walking is so great. It is travelling at a noticing speed.