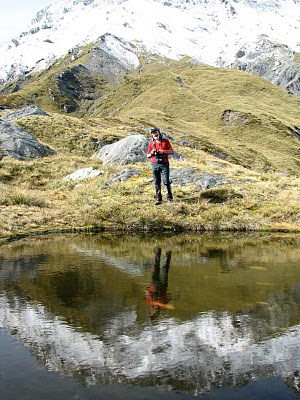 ["The hills are alive" ... your blogger enjoying some New Zealand high places. Photo by TimO]

[Some lighthearted musings on music and walking, some of which has been posted here before]

Music goes with me wherever I walk. Sometimes that is literal, as when I walk to work attached to my iPod. But failing that it is in the form of what I call “head tunes”. These may be the musical equivalent of mad voices and of possible interest to a psychologist. And who hasn’t had one of those annoying tunes that follows them around unbidden and unwanted? The Germans have coined a very apt word for it: ohrwurm – literally “ear worm”.

Usually my head tunes are of the welcome variety: music that I’ve heard recently that somehow fits with what I’m doing and pops back into my head. It becomes a kind of soundtrack for my life. Just occasionally, usually while doing a hard walk, I will even make up tunes. I don’t set out to do this, but something about the ambulatory rhythm, and perhaps the pleasure/pain of what’s involved in walking, resolves itself into musical form.

There is however one extremely unwelcome form of ear worm. That's the tune that gets planted there by one of your companions. Here's an example I include in my (unfinished) walking book. To set the scene, it happens immediately after the sublime experience of reaching the summit of Tasmania's Federation Peak.

We stumble back to the campsite in heavy rain. Surrounded by mud, exhausted, windblown and wet to the skin, we should be miserable. We’re far from it, at least until Bill shares a worse-than-useless bit of news with us. He tells us he’s been accompanied all the way down by a tune that sprang into his head while we were on top. Unfortunately it’s the Carpenters’ song “Top of the World”. And not only does he share this with us, he actually sings a verse out loud.

"Something in the wind has learned my name
And it’s tellin’ me that things are not the same
In the leaves on the trees and the touch of the breeze
There’s a pleasin’ sense of happiness for me."

Inexplicably we find ourselves joining him for the chorus, Jim and I going so far as to hold an imaginary microphones up to our mouths.
"I’m on the top of the world lookin’ down on creation
And the only explanation I can find
Is the love that I’ve found ever since you’ve been around
Your love’s put me at the top of the world."

Our choral complicity implies for one brief moment that we think the song somewhat apt. But when Bill tries another verse we quickly come to our senses, and threaten to throw him over the nearest cliff if he dares to sing or mention the song again.

He pretends to be offended, but gives the game away by grinning cunningly. He knows that the damage is done, that we will each internally hum that infernal tune right through our (very wet) dinner preparations. He stays silent as we eat, but his look is that of a farmer who’s just finished sowing his crop as the rain begins.

Is there any hope when such a despicable thing has been done to you? Is there any hero who can slay that monstrous ear worm? One sovereign remedy I have read about and tried is the “Womble Cure”.

The theory is that if you have one of those diabolical tunes stuck in your head, you simply start singing the theme from the Wombles of Wimbledon. This may sound like a “hair-of-the-dog” kind of cure, but I think it is soundly based. Most of us, it seems, know the first verse of Mike Batt’s tune (Underground overground wombling free, the Wombles of Wimbledon Common are we …etc) and can fearlessly sing that much of it. But from there on we struggle: I’ve met very few who can proceed to the second verse.

And that, I believe, is the secret to the cure. Like walking into a mire, or driving a racing car into track-side gravel, your forward momentum is stopped. You simply cease singing, and the ear worm shrivels and dies.

The walking mates with whom I’ve shared this cure haven’t quite come to swear by it yet. Indeed there’s been a certain amount of graceless swearing AT me for it. But I think they will come around in the end.
Posted by Nature Scribe at 15:55

Email ThisBlogThis!Share to TwitterShare to FacebookShare to Pinterest
Labels: ear worm, Federation Peak, ohrwurm, the Carpenters, The Womble Cure, Top of the World

I spent a few days using the womble cure to get rid of an ear worm (I won't mention it - or it might stick). It worked, despite Jim's protests!
I then read this article and tried to remember the song that I used the womble cure to rid it......AND guess what....the tune came back to me..AHHHHH! so its back to the womble cure again.

Sorry to be a bit of a Thomas on this one, Dad, but it doesn't work for me.

I had to have a bit of a chuckle this morning. Eldest daughter's school plays music over the PA to let the kids know that it's time to return to their classrooms. This morning was an instrumental (big-band!) version of "It's Been a Hard Day's Night". So apt for me...Middle child just stared incredulously as I joined in and sang the words, buckling the baby into the car.

Comment to Peter - I don't know the Wombles tune and if I did, I wouldn't be your friend any more cause I would think of you every night wishing I wasn't lying there trying to get back to sleep and singing wombles over and over and over. And over. And over . Like I do at night. Most nights. Only kidding I will always be your friend. Actually your stuck with me as your sister-in-law. Vicki