It was the light that woke me. Not just the slow leak of dawn light, but something far stronger. I emerged from the tent to a veil of high cirrus cloud that radiated a rich, warm pink. Blissful weather one day, stunning sunrise the next? Not business as usual for the Central Plateau then! 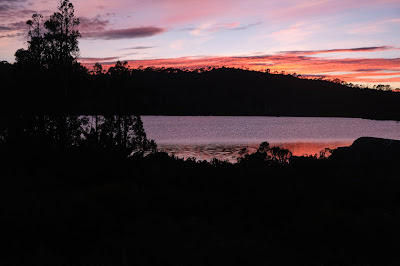 By the time I’d fetched my camera, golds and reds were joining the display, lighting up the lower clouds. The whole was then reflected back at us off the lake. As the others emerged, we wandered in wonder around the shores of Lake Tyre taking photos, or just soaking up the beauty. If we thought we were in for another beautiful day, we’d forgotten the highlands’ capacity for tricks. I’d left my tent up while we ate breakfast, hoping the rising sun would dry it a little. But as we sipped our tea, a thick mist rolled in, hiding the sun and dampening hopes of carrying out dry tents. 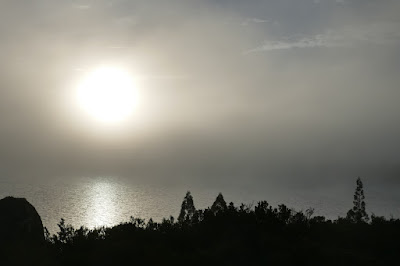 [The mist rolls in: Photo by Jim Wilson] 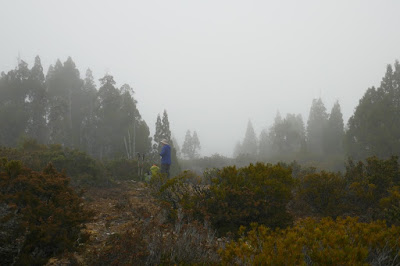 [Larry packs up in the mist: Photo by Jim Wilson]

Reluctantly, with raincoats at the ready, we packed up soggy gear in the clammy chill. As we left the camp site the mist was thinning, the day’s air beginning to mix. But above us Mount Jerusalem, which had been roiled in thick cloud, now sent that cloud rolling down towards us, like a stern angel driving us out of the garden. 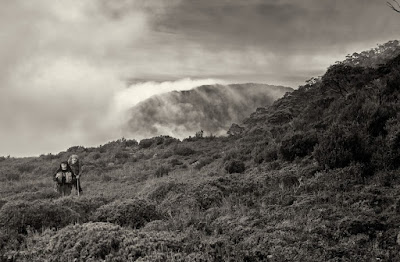 [Cloud follows us down Zion Vale: Photo by Larry Hamilton]

Our Plan A for the trip was well out of kilter by now. Instead of spending a night at Tiger Lake as originally planned, we would now bypass it and walk out to the Walls of Jerusalem carpark in one go. Tim and Merran had done this on our last walk together here, when they had to leave a day early to get back for appointments. They assured us it wasn’t difficult, though given their walking prowess, one or two of us may have taken that with a grain of salt. 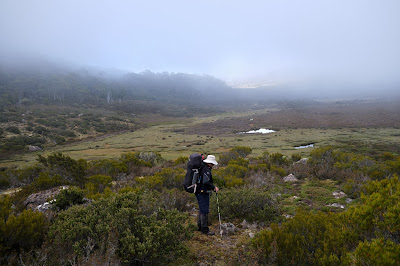 [Tim leads us towards Officers Marsh]

Still, if there’s one thing that motivates bushwalkers in the transition to the finish of a trip, it’s the craving for cold drinks and hot food at walk’s end. There are unspoken rules: it has to be something you can’t get in the bush, and it has to be prepared by someone else. Grease and beer are perennial favourite ingredients, but as we walked we considered a plethora of other post-walk possibilities.

We’d left early again. There was ground and time to make up if we were going to get to lunch in time. Fortunately, whether it was because we were walking downhill, or walking towards that promised lunch, or just because we were headed for home, Jim was the most sprightly he’d been all walk. He said he still felt crook, but he was determined to get the job done.

I noticed other transitions too. Descending towards Zion Vale, we first had to cross Officers Marsh, a buttongrass-fringed boggy area. We picked our way across it, keeping to less boggy higher parts where possible. The land felt fat with water, holding onto the plentiful rainfall not only in its many pools, but also in its deep and spongy peat soils. Wallaby scats and pads, and a wombat burrow in some higher ground confirmed it was also good grazing land. 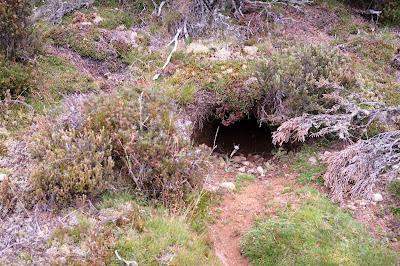 As we descended, the land grew leaner, the steeper gradient aiding faster water flow and impeding peat development. Now in places the water cut down to bedrock. The flowing water was finding its voice, chattering and chuckling among the stream-bed rocks, while calling currawongs and chittering honeyeaters sang their harmonies.

It wasn’t all downhill, of course. The highlands reserve the right to put an uphill in your way, just to keep you honest. So at the end of Golden Vale, after the junction of the Fish River and Wild Dog Creek, there was a short but steady climb towards George Howes Lake. Knowing this was coming, and feeling the warmth of the day finally asserting itself, we sat on a grassy bank for a break. It was a place a few of us had stopped before. In fact, Libby reminded us, it was almost exactly 8 years ago that she’d first met us in the Walls, joining us for a day walk past here to Tiger Lake. These days we don’t feel our walking group is complete if “Possum” (Libby’s nom de randonee) isn’t with us.

On the uphill section the sun and our physical effort squeezed the day’s first perspiration from us. After the turnoff to Tiger Lake our route once again trended downhill. And now the valley was tightening even more, squeezed between the uplands of the Walls to the south, and the outliers of Clumner Bluff to the north. To avoid a steep, bluffy descent, we left the river side and took a diagonal route through scrubby bush and forest towards the main Walls track. 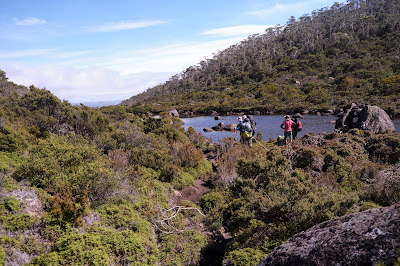 [About to leave the valley]

Eventually we met that track at Trappers Hut. And here we met the first other walkers we’d seen all trip, another surprising transition. For them the hut marked the end of their major ascent for the morning. For us it was the start of the highway home: a fully-formed track, easy to follow if mildly steep. It was tempting to just put our heads down and will the carpark to come. But for a change we were now meeting, and exchanging pleasantries with, other walkers. I’m sure our words for those nearing the top – an “almost there” or a “the worst is over” – were welcome. As we got further down, it was better to stick to “where are you from?” or “what are your plans?” Sometimes the brutal truth (“You’re looking stuffed. Sorry to tell you you’re not even half-way”) is best avoided.

Such “games”, if that’s the right word, eased us to the end of the track. Even so it seemed to take longer than I expected, even though I’ve walked this track 15-20 times. It didn’t help that I’d almost run out of water as I trudged into the very full carpark. A warm mouthful from the bottom of my Camelbak didn’t quite satisfy.

Once we’d loaded the cars and made it down to Earthwater Café near Mole Creek, all that was forgotten. We’d made it in time for a cooked lunch, and there were plenty of good choices in both food and drink. To spare other diners our malodorous presence, we sat outside at a long table set beneath some large deciduous trees. If this was a compromise, it’s one I’d choose every (fine) day. 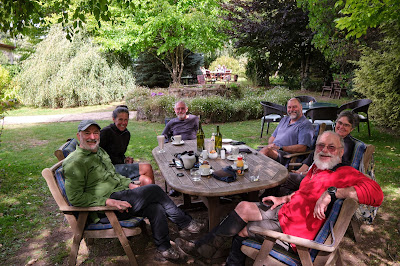 For most of us it had been a great walk, with some neat variations on our last walk on the Plateau. The fierce, wet winds that blew for 48 hours or more now seemed a distant memory. More prominent was the honour we felt to have found and followed substantial parts of Ritters Track at last. Larry and Tim were especially happy about that. Their judicious use of the sometimes dodgy GPS data was superb. And if Jim’s illness had partly spoiled the walk for him, we had to applaud his guts (pun intended) in making it to the end. Besides, with a beer in hand and fish and chips on the way, he looked as happy as, well, Larry – and everyone else.