You can’t bargain with Tasmania’s highland weather. It’s pointless arguing that you’ve suffered so much tough weather that “tomorrow it shall be fine!” Still, hope springs eternal, and the signs were good. At the end of day 4 of our Central Highlands walk, the wind had dropped to a whisper. Indeed, for the first time on the trip we could hear the night-time snores from neighbouring tents. 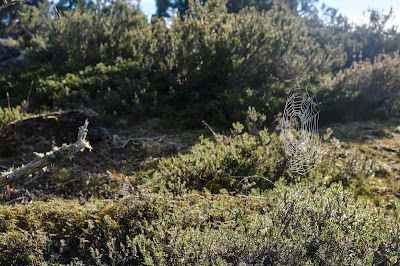 [An optimistic spider web at Pencil Pine Tarn]
So we began day 5 with the same optimism as the spiders that shared the pencil pine grove with us. They’d been busy spinning webs, anxious, I imagine, to catch some food after a few days of wind famine. And now the sun shone on web and tent alike. The wind a mere memory, the sky brilliantly blue, the weather angels singing: it was a perfect day to retrace some of yesterday’s wander on Ritter’s Track, and go beyond into the Walls of Jerusalem. 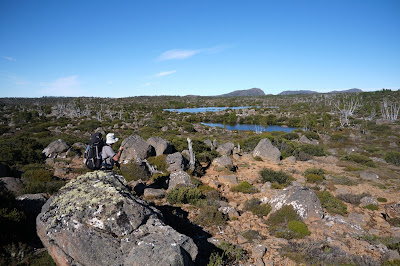 [Tim looking towards the Walls of Jerusalem]

We got away uncharacteristically early – for us – thinking we had a long day ahead, especially with Jim still feeling unwell. We took our time, ambling through a landscape that was now blissfully benign, soft underfoot, dotted with pools and tarns rimmed with sphagnum and pencil pines. It’s a country that’s wonderful in any weather, but this day, after those that preceded it, was one to savour. Even if it were possible for the grand scene to overwhelm, the small things could still give their quieter joy. I kept noticing, for instance, scatters of tiny yellow berries and similarly small red berries. It was as if careless wee folk had upset their applecarts. 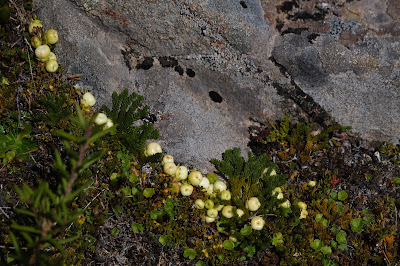 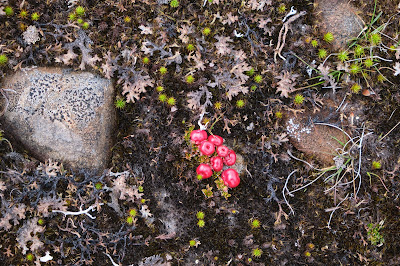 [Gaultheria tasmanica berries ... or are they wee apples?]

Out front our two “navigational nerds”, Tim and Larry, again steered us along Ritter’s Track via the now familiar cairns. Once we passed the point we’d reached at the end of yesterday’s reconnoitre, our leaders focussed on quickly finding the next few cairns. By now Jim had slipped to the back of the group, his tank already low on fuel. When a helicopter flew over, he looked up longingly, as if it might be possible to flag a lift. It didn’t help that every time he caught up with the group, the leaders would start off again. Hearing Jim’s mutterings, I decided I’d join him at the back. Two voices might have better luck moderating the enthusiasm at the front of the group. 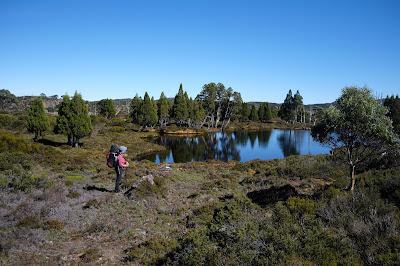 [Merran takes in the blissful scene]

After a couple of hours we passed between the aptly-named Long Tarns and Lake Butters, neither of which we could see. But we did find a delightful smaller lake, and paused there for scroggin and water. On our last traverse of this country, we’d been further north. I remembered that getting across Richea Ridge, west of Long Tarns, had been rough and quite scrubby. We were hopeful that this time, being further south and “on” Ritter’s Track – if you could ever truly say that – we might find an easier route, perhaps avoiding Richea Ridge altogether.

No such luck. The cairns were now as sporadic as they were dubious. There was nothing for it but to take a rough bearing west towards Lake Tyre. That took us up, over, around and through some rocky, scrubby bush. The fact that it was riddled with Richea scoparia strongly hinted to us that we hadn’t avoided Richea Ridge after all. 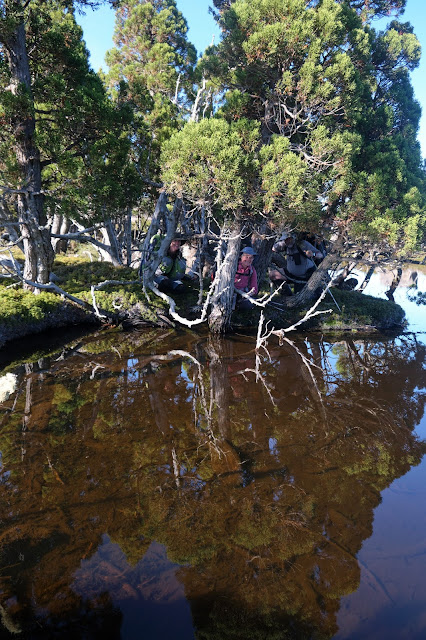 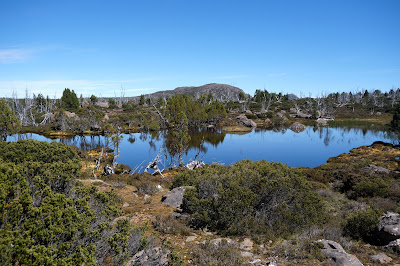 [Getting closer to Mt Jerusalem]

It was hot, sweaty work on this warm, sunny afternoon. We were glad when we finally began to descend towards the valley flanking Mount Jerusalem. We were tempted to stroll down the now clear valley towards Zion Gate. However we’d learned on our last trip that we had to stay one valley east. This necessitated a bothersome trudge up a bushy hill which earlier in the morning would have seemed nothing. We had some reward at the top in the form of a view of Lake Tyre’s south-eastern shore. The sting in the tail was that our preferred campsite was on the north-western shore, another few hundred metres away, and through some scrub. 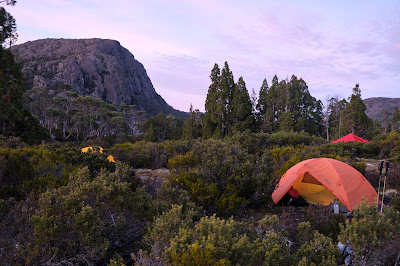 [Tent set-up at Lake Tyre, with Mt Jerusalem behind]
Still, we reached the campsite by mid afternoon. We may have been hot and tired but, in the words of young Mr Grace, "we’d all done very well". Once we’d put up our tents, drunk a litre of water, and settled into our Helinox chairs (if we had them!) our day 5 optimism started to look justified. Some rare days in the highlands go just as you hoped they might.
Posted by Nature Scribe at 15:54