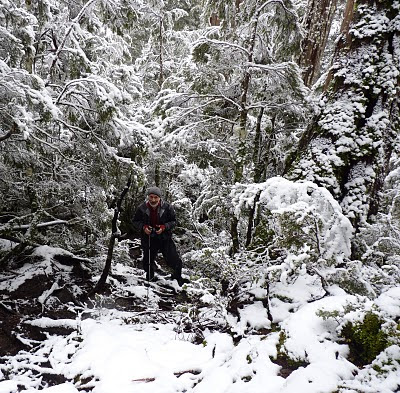 Tasmania is the only place in the world that has bushwalkers weather alerts. I’ve no doubt people in many other places, including mainland Australia, receive adverse walking weather. Trampers in New Zealand, hikers in North America, and ramblers and hill walkers in the UK face conditions every bit as hazardous as ours. But by accident of history, vocabulary and popularity, Tasmania’s bushwalkers join sheep graziers in receiving specific weather alerts when cold, wet and snowy weather is forecast.


What is it like to find yourself out there when one of these alerts is current? The June long weekend this year provided a good test. Our group planned to head for Windy Ridge, at the southern end of Tasmania’s Overland Track.

Two days before we leave, snow showers are forecast down to 500m. When the words “bushwalkers weather alert” are added, some members of the group become nervous about us walking to well above 1000m. We go anyway – jollying them along with optimistic bravado.


Arriving at Lake St Clair we note, with eyebrow-raising interest, that the outside air temperature is only 1 degree C. The showers are coming and going, but the snow isn’t settling at the lake’s 700m altitude. We head for the ferry that will smoothly deliver us to the head of the cloud-shrouded lake in little more than 20 minutes.


80 years ago the trip for Jack Thwaites and party was more hair-raising. A. D. Fergusson (“Fergy”) used to run an open boat up and down the lake at break-neck speed – when he could get the engine firing. His deliberately erratic driving would have put him in the hoon category today, so the Thwaites party were all thoroughly wet by the time they reached Narcissus Bay. And they only achieved that after they’d rowed more than a mile up the lake when the engine died.


We arrive safely, achieving a similar level of wetness only after a few kilometers of showery walking. As we gain altitude the showers are turning sleety, and by the time we reach Windy Ridge there is plenty of snow on the ground.


The next morning we half expect to wake to a blanket of snow. But the showers have eased, and it proves to be a flimsy blanket, with less than a foot’s depth of snow around the forest-enfolded walkers’ hut. Through the trees we catch glimpses of snow caps on the Du Cane Range. It is cold and the clouds promise more snow, but Du Cane Gap and the waterfalls are calling. We put on fire-dried boots and wet weather gear, and soak them all again within the hour.


It’s said that the North American Inuit have a vast number of words for snow. While that is debated, the various Finnish dialects do have more than 50 words for snow (or “icy precipitation”). And it shouldn’t surprise us that people of the far-north have a nuanced vocabulary for snow.


I, on the other hand, am a snow novice. A teenager before I saw snow in the flesh, as we climb through the ever-thickening snowy forest, I am a teenager again. I can’t find the vocabulary for the wonder of this frozen scene. 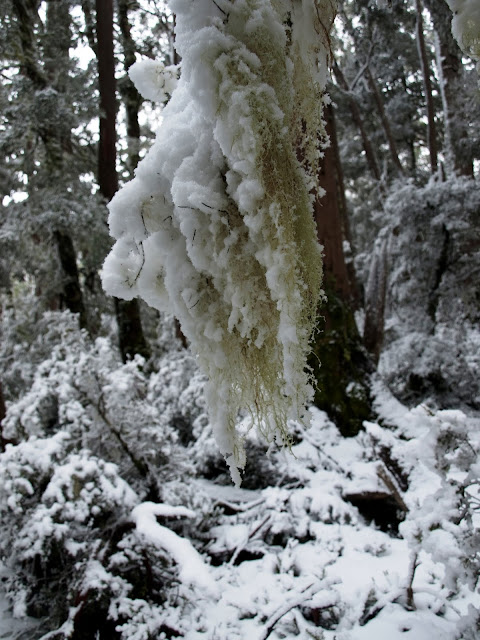 [old man's beard (lichen) encrusted in snow]
But I begin to get a sense of snow as a symbol for the here and now. Transient yet firm, soft but transforming, full both of light and delight. It disguises danger; reveals shape; muffles sound; sighs softly; kills gently. It can tickle, thrash, melt, smack and scratch. And every flake of it is unique.


What if we’d heeded the bushwalkers weather alert? What if the thermal gravity of the wood heater had held us down in the warm hut? In answer I simply smile.
Posted by Nature Scribe at 16:53

You're not alone in being a late-comer to snow Peter. As a Far North Queenslander, I didn't experience snow till I was twenty. Probably one of my most memorable snow experiences was climbing Mount Wellington one snowy day many years ago at a time when I was still living in Melbourne, one of my first meetings with my future father-in-law, and he invited me for a walk up the mountain through the snow. Very special experience.

I think your blog's great.

that 2nd last paragraph is delightful! "Snow as a symbol for the here and now" .... its the rare moments when we enjoy the 'now' that can delight and surprise us, and like snow, can reveal new views.

A glorious winter walk mate, one which you've summed up beautifully.