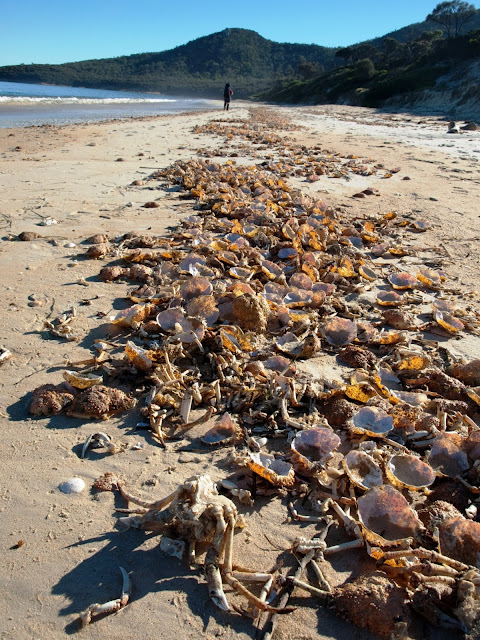 The central section of the long and peaceful strand has become a war zone. For more than 100 metres crab bodies, carapaces, legs and cryptic crabby bits litter the sand. Thousands of spider crabs (Leptomithrax gaimardii) have been stranded on the shore, or so it appears. These crabs are common all around Tasmania’s inshore coast, especially in silty shallows such as those of Great Oyster Bay. They appear to be social animals, aggregating together at moulting and mating times. As with spiders and many other invertebrates, they only grow larger by shedding their entire outer “skin”. At such times, their new outers still soft, they are more vulnerable to both predators and rough weather. Aggregation may be some defence.

For a couple of days prior to our visit, the weather has been far from tranquil. Record rains and strong winds have hit the east coast. It seems likely that this event has coincided with the moulting season, and the waves have brought clumps of crab bits ashore. That not every shell is empty indicates that some live spider crabs had been washed ashore along with the outgrown suits, or more properly exuvia. The “fish-shop” aroma testifies to the same.

A silver gull pads up and down the intertidal zone. Compared to its urban kin it is scarcely recognisable; immaculate of plumage, stark of colour, deft of movement, solitary. It stops at intervals, “puddling” with its lollipop-red legs. Fleet feet pump the sand each time a wave retreats. The gull follows, gobbles the refugee fragments of food: sand worms, tiny crustaceans, hoppers, the beach’s equivalent of krill. It keeps this up for almost an hour while I am there, probably for many hours after I leave. A vast hors d’ouvre or else an extraordinarily long lunch. 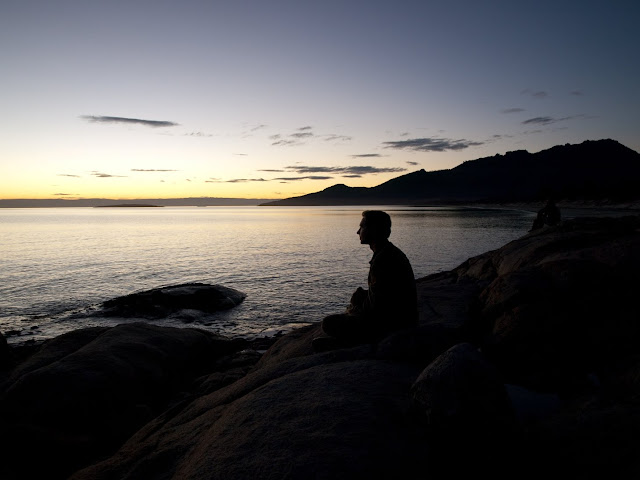 Steep, secret steps plunge to a pirate’s hide-away, all nook and cove. Over the ages smooth, sweetly-coloured granite has yielded up its grains to the ever-moving suck and rasp of the waves. In our time we have been falling feet - shod and bare - and reclining diners, with gently rocking bottoms that add to the wear that cedes sand morsels the consistency of bread-crumbs. Let those who read future rocks discern the trail of crumbs that will lead to new rock, and a form of eternity.

At Cooks Beach the winter night comes early and falls fast. It is dark by 5:30, and we finish dinner by the light of fuel stoves and head torches. One of our group points to the Milky Way and tells us a fragment of an Aboriginal story. Two brothers, an emu and a possum feature. What we had always taken to be a string of nebulae beneath and below the Southern Cross are revealed as parts of the defeated, dark emu spirit. The stricken bird droops in death. Two bright stars are spears in his neck, thrown by the brothers to end his interference. Such luminous myths beggar the Greek cosmos of joined dots.
Posted by Nature Scribe at 13:23

Peter, you've published several spam comments. They contain sequences of links to various (mainly unwelcome) websites. I was inundated with them a while ago. I believe there is some hack method of removing comments after they've been put up.