The Nearby Wild: Part 2 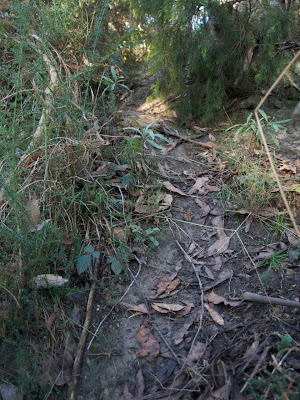 Our old backyard had runways made by a couple of generations of dogs. Each morning I would use a ball-flinger to throw a ball 30 or 40 metres up the backyard for them to fetch. Angus, who had retriever blood, was rather worse at it than his successor, the hopelessly hybrid but eager-to-please Nuala.
This long practice produced an elongated bald patch in what passed for our back lawn: a dog line made by pounding paws. It extended up the slope towards the bush that took over beyond our back boundary. Had I known to look, I would also have found runways into the bush itself, caused not by dogs, but by marsupials.
Now that we live in that backyard, I see not only these other runways but the native animals that use them. The strange thing for me, as for so many Australians, is that I know precious little about the wildlife that shares our place. Dogs, on the other hand, are our familiars. They respond to our words; treat us as part of their pack; allow us to pat, pamper and potentially command them. We may even have seen them breed, and watched a litter of blind pups mewling and snuggling at a bitch’s teats, or later tearing up almost anything they find.
If you’d asked me about the life of a pademelon (Thylogale billardierii - aka the rufous wallaby) my answer wouldn’t have detained you long. At least until I started hearing and seeing them in our yard on a regular basis, and got curious. 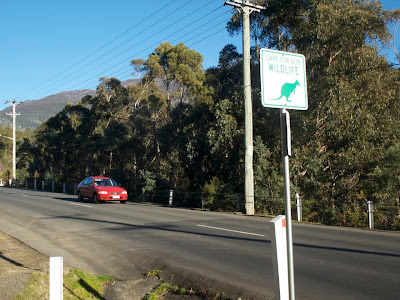 [as the sign indicates, we share this place - even the roads - with wildlife]
Let’s start with hearing, because these night-active fur-balls are stealth on legs. While possums screech and scream, pademelons are largely silent. I’ve heard them occasionally “pish” at each other, presumably during a dispute. And the males are said to “cluck” when pursuing a female, though I’ve never heard this. Otherwise they are the politest of guests, and you’d hardly know they were there but for their percussive sounds. As with many grazing mammals, they thump their hind legs as a warning sound. And of course make the same sound when hopping.
I hear that sound – I call it the bush’s crepuscular heart-beat – as they make their way to bed in the wee hours. Having spent the night grazing on our’s or the neighbour’s grass, they are heading towards thicker bush: their preferred shelter during the day.
Once at rest they are very difficult to find, as their thick dark fur is flecked with a range of tones that blend perfectly with our bush: from burnt-stump black through to rusty grey. If captured at rest for a still-life study, an impressionist might see a tilted furry pear. The haunches are disproportionately large, the shoulders slim and hunched and the petite romanesque heads topped with flicking, flame-tinged ears.
After mating, and a gestation period of about one month, the female carries young in her pouch for as long as 7 months. Another embryo (or blastocyst) is held in reserve, ready to take over when the pouch young leaves. This system allows pademelons to respond quickly to good seasons by breeding continuously.
In motion pademelons are agile and quick-footed, and bounce away rapidly when approached by humans or dogs. Although they seldom stray further than 100m from tree cover, in many areas that brings them into contact with cars.
One frosty morning I find a mature pademelon dead by our road-side. It has been hit during the night. Dazzled by the car’s lights, its agility and grace has only been enough to bring it into contact with the unforgiving motion of a car. 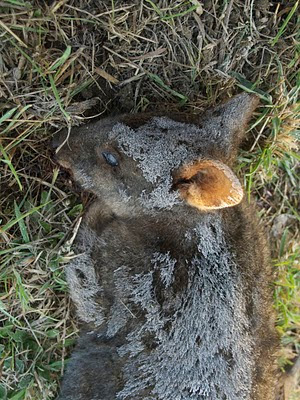 [the cold, dead body of a pademelon hit by a car on the road]
Posted by Nature Scribe at 13:11

love the description of the "tiltled furry pear"!

I loved that description too. Very sad photo of the dead pademelon. I had dreams about it.