Look, Up In The Sky! 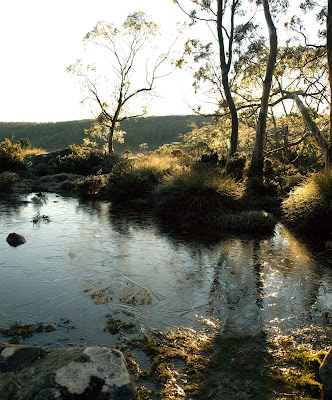 [A special light: Sunrise over a frozen pool, Mt Field, Tasmania]
[Life is full of surprises. Try looking skyward sometimes ...]
I was watching a short clip from a new film, when my eye was caught by the quality of the light. It was an ordinary outdoor scene somewhere on a non-descript part of the Australian coastline. It may have been cinematographic trickery, but to my eyes there was something about the light that immediately said “Tasmania”. So I was not surprised to learn that much of the film – including the clip I had seen – had indeed been shot in Tassie.
To me one of the subtle secrets of Tasmania is the soft and slanted light of our non-summer seasons. Years ago, when I proposed writing a regular column in the local newspaper, one trial piece referred to the autumn sun as “spreadable like butter”. I was amused when the editor – a crusty old tabloid man – referred to this bit of writing as “almost poetic”. What amused me most was that from him, this was criticism! (Need I say he didn’t choose to publish the pieces?)
But back to the light … I’m talking about the times of the year when fewer visitors come to the island; when the sun blesses rather than burns; when warmth can be found in a north-facing boulder nook or against a stone wall. And when spiders take to the air!
I was reminded of this migratory burst when driving back through Sheffield last week. A barrage of spider strands was floating across the fields, each an elongated exclamation mark of hope highlighted by the subtle, slanted sunlight.
It was apparently a perfect day, and the perfect time of the year, for spiders to cast their fate to the wind, and go ballooning! This may sound fanciful, but the most efficient way for many species of spider to disperse is through so-called ballooning. To do this a spider will climb to a high point, and release a thread of silk into the air. With the right wind conditions the silk will fan out down-wind, forming a kind of two-dimensional spinnaker.
The spider will eventually let go and sail into the wide yonder, hoping for the best. Ballooning spiders have been found in the ocean; on newly-erupted volcanic islands; on glaciers and ice-caps; on the tops of the highest mountains, in fact anywhere that the wind might take them.
They are part of what ecologists refer to as aeolian plankton: the myriad life forms, mostly invertebrate, that can be found in the atmosphere at any one time. We expect birds and bats to take to the air, but sometimes forget that seeds, spores, eggs and even complete life forms such as spiders and mites, can spend a considerable time in the ether.
Only when the light is right will large vertebrates like ourselves even notice the amazing, drifting diversity of life around, above and occasionaly upon us.
Posted by Nature Scribe at 18:03

Emily is learning about punctuation at school at the moment...I can't wait to share your analogy about the exclamation mark with her.

love the poetic-ness!
It seems that size and gravity are sometimes a hindrance to our sensing light and lightness.
Go you flying spiders! Bring back candle-light and firelight!