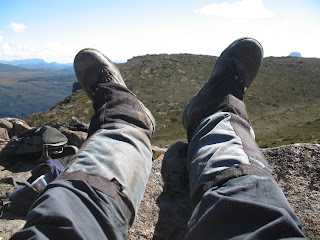 I have no memory of my first steps. But my first recollection of childhood has me walking in a garden. I amble between rows of gladioli, their flowers towering above me like wonky trumpets. There is a rich organic smell from my father’s home-made compost. I cannot have been much more than 2 years old.

Anyone who has witnessed a child on the verge of walking will appreciate what a perilous act it is. What skill and will is required to prevent our pumpkin-weighted, top-heavy heads from bringing us smashing back to earth. Two-footed walking is the constant prevention of toppling by the placing of one foot in front of the other. Only familiarity and continual practice disguise its wonder: that and the fact that most of us have more or less mastered the art to a basic degree. Few primates and even fewer other mammals can boast as much.

I was born in the afterglow of Sir Edmund Hillary and Tenzing Norgay’s successful ascent of Mt Everest. Common or garden walking – the same sort by which I had negotiated my way through the gladioli – had taken them to the top of the highest mountain on our planet. As a child of that time, it meant that anything seemed possible, if only I kept at it.

But there were other events, both global and familial, that meant I didn’t take for granted that my legs would always work. The same year Hillary and Tenzing reached the top of the world, around 10 000 people in Australia contracted Poliomyelitis. The disease killed more than a hundred of those, and left thousands unable to walk. My great uncle Gwesyn was one of them.

For many years his presence, metaphorically more than physically, was a powerful and fearful one for me. On Sundays our family would sometimes visit Gwesyn and his sisters, my fraternal grandmother and my great aunt. But we would seldom see any more hint of great uncle Gwesyn than a wheelchair or discarded walking cane in the darkened hallway.

On rare occasions we would hear his voice from the end room. It added a frisson of excitement to the atmosphere of drawn curtains, whispered conversation, doilies and polite cups of tea at Grandma’s. For some reason, it could have been fear or shame, but was more probably a misguided desire to “protect” us from his suffering, it was many years before we properly met Uncle Gwesyn.

Whispered conversations seemed a standard part of our family life, especially when it came to health and money. I knew the meaning of sotto voce before I wore long trousers. There was secrecy about my mother’s kidney disease and my father’s pleurisy, both potentially life-threatening. Being unable to discuss such things openly, we developed an unhealthy fascination with health matters. My older sister dabbled in hypochondria, faking her own appendicitis so expertly that she had the perfectly healthy appendix removed.

In my own case I developed what was apparently known as hysterical paralysis. For a day or two my legs simply refused to work, locking up and causing me to stay in bed until our doctor friend – in a whispered aside – told my parents it was nothing to be worried about. A few promises of treats and a bit of jollying along soon got me walking again. But to this day I wonder whether it was a phantom paralysis brought on by a morbid fear of Uncle Gwesyn’s polio. Though he became so much more, during those formative years he was a powerful reminder to me that walking was a gift to be cherished.

And if I could walk, I desired to walk among mountains. From my childhood home in Sydney’s inner north we looked across bush towards the distant Blue Mountains. On clear days, with a westerly wind sweeping haze from the air, the plateau formed a blue margin between bush and sky. The bulk of Mt Tomah – how important it always seemed to know a mountain’s name – would sometimes be enhanced by an afternoon build up of white storm clouds. If I squinted the clouds became snow-capped peaks above the blue foothills of a Himalayan range. Starved of true mountains, these were the mountains of my mind.

One Sunday afternoon I had my first chance to ascend this squinty mountain range. Even aged seven or so I understood that a picnic with your family, including a grandmother and a couple of elderly aunts, was not the standard build-up to a climb. But armed with my father’s word that “the Blue Mountains proper begin when you cross the Nepean River”, I knew what I had to do.

While the elaborate picnic lunch on the Nepean’s banks was being packed up, I quietly slipped away. Avoiding stinging nettles and cow pats, I waded into the shallow sandy waters of the river, gasping slightly at its sudden cold. I was sensible enough to remove my sandals for the crossing, buckling them back on once I was on the far side. Then with gritty wet feet and a thumping heart, I climbed the steep bank and began my ascent of the Blue Mountains.

The climb was cruelly interrupted when one of my sisters started following me, giving the game away. With so many overly-sensible adults on the look-out, it should have been no surprise to me. But I still felt thwarted, convinced I was within reach of my goal.

Nearly half a century later, I haven’t grown out of this early love. Mountains loom larger and closer than ever. My childhood fascination has drawn me to live almost literally in the shadow of one particular mountain. Kunanyi/Mt Wellington is my muse, my barometer, the visual shelf for my half-formed thoughts. It draws the rain – God’s sprinkler we used to call it – and keeps a dogged doleritic watch over Hobart and the valleys, hills and waterways around it.

From such a base, with more than 40 years of walking behind me, it feels high time to pause and celebrate walking. I want to reflect afresh on the wonder of where feet can take you, and what you can experience along the way. In part this book is an attempt to repay a debt owed to a mountain – a mountain that became my own Everest, and made a difference to how I have faced the rest of my life. It is also an attempt to explain in words an activity undertaken by millions which consistently hovers somewhere between the ordinary and the extraordinary; the pedestrian and the celestial. What follows then is the story of one particular walk as well as an ode to the wonder of walking in general.