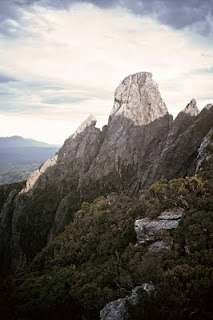 [Federation Peak photo courtesy of Tim Chappell]
Federation Peak to Bechervaise Plateau, Thursday February 7th, 1991
Some cheery soul has told us that 7 out of 10 mountain climbing deaths happen on the descent. Clearly going down is more dangerous than going up, but is it more difficult? Early in the walk we’d had a dispassionate discussion about just this. We had various theories. Some of us had argued that climbers must relax too much after summiting; others that they just become exhausted after the exertions of the climb. I wondered whether they simply couldn’t see as easily where they were going during the descent. I theorised that lowering yourself tentatively is a lot more fraught than reaching up tentatively. The former has a serious point-of-no-return that the latter lacks.

As I reach the lip of the summit block such thoughts are my unwelcome companions. But looking over the edge and down to Lake Geeves, some 600m below, makes it anything but theoretical. Suddenly the third person “they” becomes first person “we”. In fact the climbing arrangements make it first person singular for me, as I’m voted the last one off the mountain: the rope-holder and rope-bearer. That North Head abseiling boast has come back to haunt me!

The problem with being last off is that you have to sit and watch everyone else get nervous at every single obstacle. Much of the time we’re not using the rope, as there’s too much traversing to make it useful. So I have little to do but wait and watch. In the fertile ground of inaction, my own nerves grow rapidly. Each problem is magnified as I see others struggle with it. The butterflies in my stomach reach eagle proportions. The nearest I can get to action is to advise from on high. I revert to this now as Bill, who’s leading, meets one of the serious bits of the descent. We’ve all turned face towards the rock, so Bill’s finding it difficult to locate the correct foot placement. As he’s below me at a slant, I have a reasonable view of where he should be going. I call down instructions, conscious of keeping a steady voice, of not frightening the horses. But the wind is roaring, and a soft voice is useless, so I doubt that my tone is as reassuring as I intend. Bill, then Margaret and the Doc, negotiate the difficult drop slowly, faultingly. But in the end there’s not too much panic. They then turn and guide Natalie and Peter down, and it’s their turn to try and sound confident. Jim and I are pretty much out of earshot by now, and cooling off while we wait. Or perhaps we’re shivering from nerves.

Eventually we too get to descend. If it’s a climbing test, we probably rate a terminating pass. And even then not without praying a prayer that’s only marginally more articulate than “God save us!” I think I specify my need for strength and wisdom, a self-centred and preservationist prayer perhaps, but nonetheless a crie-de-coeur. My old climbing instructor had hammered into me that “knees are for praying, not for rock climbing”. Never the purist, I am using my knees at almost every opportunity on this scraping and scrambling descent. But if I disregard his rule, I at least remember to pray. And not only on the several hairy sections of the descent, but also during some of the long waits in beautiful and terrifying places. If God is both Maker and Protector, it’s as well to remind him you appreciate both!
Posted by Nature Scribe at 11:53

Phew, and I was nervous about you going up... now I have to wait to see if you get down safely!