[excerpt from a forthcoming book] 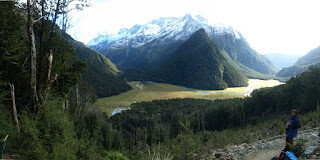 Photo: on the Routeburn Track, NZ

For a Tasmanian, walking into a New Zealand beech forest is like finding a previously unknown relative. There is something so familiar about the colour, the feel, the look of the trees; the shape of the leaves, the damp tang, the fungi on the trunks, the texture of the forest floor, the glow of the mosses. Even some of the bird calls hook the heart toward home. These are surely some of the old trees of Gondwana, just like those I’d find if I crossed Cephissus Creek and walked up that ever so familiar track towards Pine Valley Hut in central Tasmania. Just like those I’d find in whole swathes of Tasmanian forest which continue to resist the almost irresistible advance of the eucalypt.

And of course the resemblance is a family resemblance. The various species of Nothofagus (literally “false beech”) are found in New Zealand, Australia, South America, New Guinea and New Caledonia. Its distribution was one of the keys to the theory of continental drift. Because Nothofagus seeds aren’t dispersed by birds and other animals, and don’t spread far in water or wind, it seemed highly unlikely that the current distribution happened across the oceans. Rather, it is now accepted, these landmasses were conjoined until their diaspora began around 80 million years ago. By that time the ancestors of the beech genus were established, and when Gondwana split, each part carried with it a botanical, invertebrate, mycological and microbial cargo that has continued to evolve and adapt to new conditions, and to the addition of other new species.

As we walked that day through beech forest towards Rob Roy Glacier, I noticed more than just the similarities. There were also differences; some obvious and easy to spot, some more subtle and profound. Tasmania’s beech forests are not abounding in obvious wildlife. Much of it is cryptic and/or crepuscular (most active at dawn and dusk), and so not always visible when bushwalkers are out and about. But the evidence is always there if you know where to look. It might be a whiteish, fur-filled scat giving away the scavenging diet of a Tasmanian devil. It may be a tunnel-shaped runway through the understorey betraying the presence of potoroos. Or perhaps a fur mass showing where possums have had a territorial scrap. And where the margins of the forest meet buttongrass plains or heath, the comically practical cuboid scats of a wombat are rather more obvious, deftly deposited on logs or rocks or tracks for other wombats to read.

In this New Zealand beech forest, the first thing I noticed was the lack of these signs, and thus the lack of mammals. Of course I knew that New Zealand didn’t have any native land mammals, and that this was another Gondwana-related matter. Although ancestral marsupial mammals had been in Gondwana before New Zealand broke away, none had survived in modern New Zealand (no-one knows why). So I expected no scats, no runways, no fur scraps. But it was still more than strange to think of a forest without native mammals, even at night.

Then a most remarkable creature began to turn my thoughts around. In the middle of the beech forest we quite abruptly came upon our first kea. Thinking it would be shy and soon fly off, we cautiously took out our cameras. Keeping a respectful distance, we took some photographs, the large sickle-beaked parrot patiently posing for us. But as we put our cameras away and continued our walk, the kea hopped nonchalantly onto the path and began to follow us. 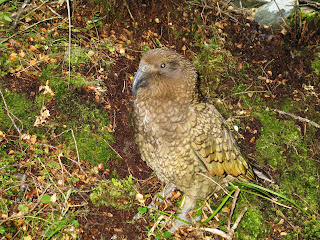 For a good hundred and fifty metres, we were tailed by this lord of the forest, hopping along the track like a green ghost of Long John Silver’s parrot. When we stopped, the kea stopped; when we moved on, so did the kea. It was as comfortable and confident as any Alaskan brown bear would have been in the forests of Baranof Island, where we’d walked just a year before. But I’d have to say I was a lot more comfortable being followed by a giant parrot than a giant bear!

In a strange way the comparison is not completely odious. In the absence of terrestrial mammals, the New Zealand food-chain is topped by birds and reptiles. In a real sense the kea is one of the kings of the bush in New Zealand – so much so that a bounty was once put on their heads because of the mayhem they can create among remote sheep herds. They will eat meat, especially seeking the kind of high-energy fat that will keep them going through the winter. The bounty system, which saw perhaps 150 000 keas destroyed, was ended in 1971, but the species was only legally protected as late as 1986. Today its range is far more restricted than it once was – largely due to human persecution. However its presence, perhaps even its place of honour, in the South Island’s high country forests, seems secure.

This ecological niche-shifting – at least in comparison with the hierarchies I’m familiar with – was further illustrated as we walked along the West Matukituki River. Pied oystercatchers (Haemotopus ostralegus) are common in Tasmania, as they are in many parts of the world. At home they are almost entirely coastal birds, partially living up to their name by feeding on molluscs, crustaceans, worms and other seaside treasures found on beaches. They breed along those same beaches. But in New Zealand, perhaps because mammalian competition and predation is minimal, these oystercatchers mostly breed along the braided rivers of the South Island. The changeable but fast-flowing inland rivers must create similar conditions to saltwater tides, stirring up sediments, creating water and air movements that encourage edible invertebrate life. Certainly the equally incongruous presence of terns and gulls along these rivers points in that direction.

Regardless, hearing the oystercatcher’s startled wik wik cry, so familiar from my Tasmanian coastal walking, still caused a double-take here by the Matukituki. It was like hearing a rooster in a restaurant: a normal enough sound in an altogether unexpected place. The restaurant analogy was once sadly apt, as these New Zealand oystercatchers were hunted as gamebirds until protected in 1940. Apparently no-one told Tasmanians, as I’ve not heard of them being eaten in my home state. But this particular day, along the beautiful Matukituki, they seemed perfectly at home, foraging by the river or prodding sods for a morsel. It’s good to hear that their numbers are increasing now that hunting has ceased.

Taking the long view, it’s harder to be optimistic about the many other kinds of change that human action continues to bring into all of the world’s ecosystems. We may no longer hunt down keas, oystercatchers and Tasmanian devils, but they – and we – are slowly being hunted down by that 21st century scourge – climate change. In Tasmania, for instance, the advance of the eucalypt, so brilliantly adapted to drought and fire, will sooner or later displace the old Gondwanan brigade.

This was poignantly illustrated while we were tramping in the wet New Zealand spring/early summer of 2006/7. As we slopped through a very wet final day on the Routeburn Track, Tasmania and much of eastern Australia was having an early and severe bushfire season. Projected long term, for Tasmania at least, there must be concerns for the long-term survival of drought and fire-intolerant species such as many of the Gondwanan species.

Climate change predictions for Tasmania and New Zealand’s South Island may drive the former Gondwanan mates further apart. Species such as the devil, already threatened by a cancer-like plague that has seen them officially declared endangered, look far from secure in the very long-term.

In New Zealand the ongoing mayhem caused by feral animals is considerable, and no case is worse than that of the possum. The deliberate release of Australia’s much-loved brush-tailed possum (Trichosorus vulpecula) in the mid 19th century for the fur trade has had disastrous results. There are now estimated to be up to 100 million of them in New Zealand, and they’re found in virtually every part of the country. I have a vicarious sense of shame in the fact that they are dubbed “Tassie blacks” because of their fur colour and their state of origin. There is only a slight easing of that feeling when you find you can purchase gloves, thermal and fashion clothing that uses possum fur to add warmth and weather-resistance to wool. With typical Kiwi flair it’s referred to as “merino mink” – a neat marketing tag that combines wool of Spanish provenance and fur with Tasmanian origins, adds an allusion to a now-rare European fur, and somehow makes it sound 100% pure New Zealand.

Of course change will always happen, whatever effort we might make to forestall it. And there will be some winners as well as losers in the natural environment. But as I walk in these delightfully wild areas, it’s hard not to feel the sense of an old order passing.