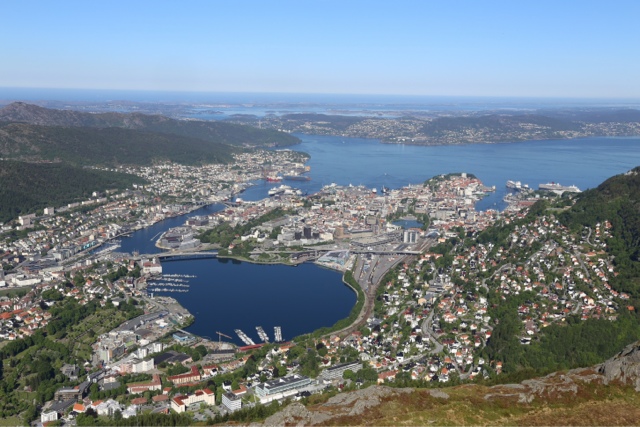 [Bergen from Ulriken]
Ulriken is not a big mountain. Nor is it particularly wild or difficult to reach. Yet as we crest its final rise and touch its 643m summit cairn, we are pleased to be there. The highest of the seven mountains that surround the western Norwegian city of Bergen, it is a small slice of the verticality that helps define the Norwegian landscape and character. And on a rare blue-skied day, it is an exceptionally beautiful place to be.
Norway only gained national independence - and a partial kind at that - in 1814. In earlier times it was either warring Viking fiefdoms, or subsumed within various shifting Scandinavian kingdoms. Its growing independence coincided with the Romantic movement, when notions of nature were resurgent against the excesses of the industrial revolution. As a new nation wanting to distinguish itself from its neighbours, Norway turned to nature. Its abundance of mountains and fjords helped differentiate it from the flatter, forested, lake-dotted nations of Sweden, Denmark and Finland.
Of course such a notion of nationality could only be built on a tradition that was already deeply rooted. That tradition - part philosophy, part lifestyle - is summed up in the Norwegian word friluftsliv. It's difficult to render into English, but it's about living in the open air: hiking in the mountains, camping by the lakes, hunting in the hills, boating and fishing in the fjords. It means getting out into one of the world's most beautiful landscapes, breathing some of its freshest air, and embracing whatever the weather brings. And considering that weather, there's often the need for a hut. 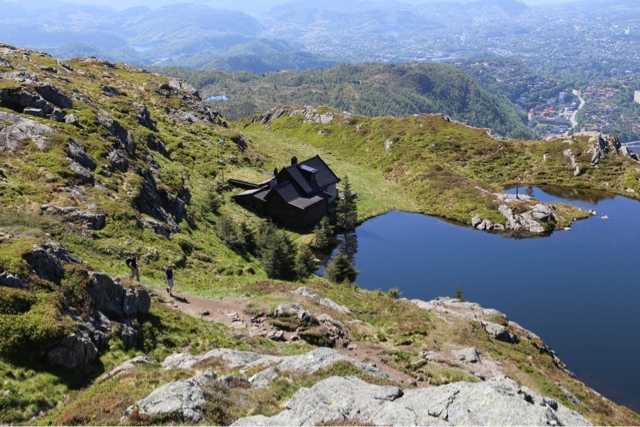 [An idyllic lakeside hut, with suburban Bergen far below]
Our wanderings on Ulriken give us an insight into this outdoor culture. The small lakes and tarns that fill the hollows and valleys immediately draw us, and we walk towards one with a small hut nestled on its shore. As we progress we start to see more huts. Within the space of two hours we see perhaps twenty huts of various shapes and sizes dotted all over the mountain. Most are locked, but we peep in through windows to get an idea of how they're laid out; how many they might sleep.
We see one hut being worked on, and introduce ourselves to the man tinkering with the hut roof. Willy, a friendly Norwegian octogenarian, is the owner of the hut. He explains the tradition of hut ownership: most of the huts we've seen are either privately owned or are owned and run by clubs. People use them all year round, whether for hiking in summer or skiiing in winter. Willy allows us to look inside the small hut, although he is apologetic about its messy state during renovation. To us it is delightfully cozy, its details beautifully worked. 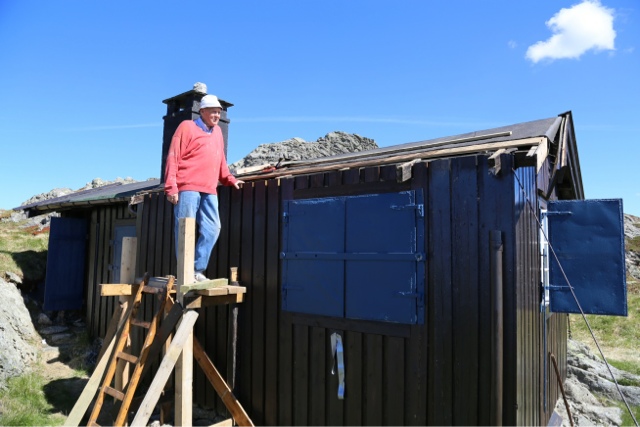 [Willy works on his humble Ulriken Hut]
On our way back we see the tell-tale fluoro jackets of a school group. Children as young as five are being shown the mountain by teachers and other adults. In our couple of ours on the mountain we pass several groups, totalling as many as 60-70 students, out in the mountain air. Even the teenagers among them seem to be enjoying themselves. We get the strong impression that the Norwegian love of the outdoors is alive and well, and being kept that way from one generation to the next. 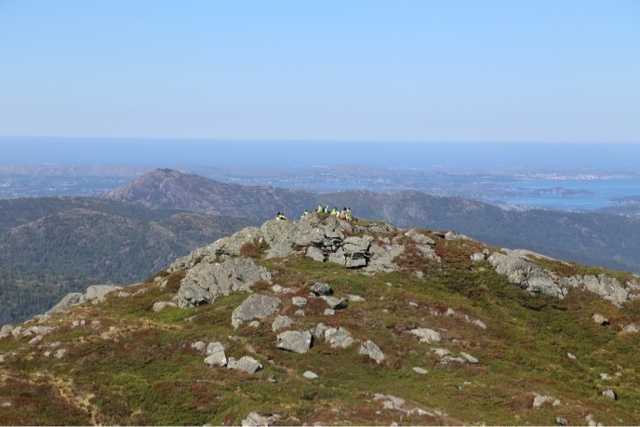 [Some wild schooling on Ulriken]
Posted by Nature Scribe at 00:36