A Sublethal Envenomation: or Did Curiosity Almost Kill the Dog? 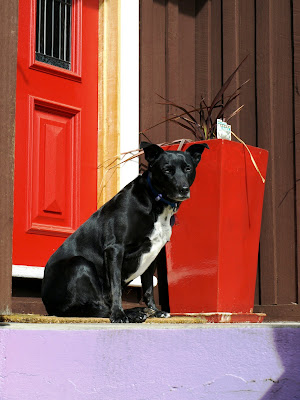 [a close call with nature, close to home]
Our dog Nuala – Noo for short – is getting on a bit. She has a few old age lumps, and is a bit stiff in the joints at times. But overall she’s had a lucky life with a caring family. We’ve helped to transform her from a flighty, insecure, attention-seeker into all-of-the-above with vague pretensions to serenity.

We think she may just have extended that lucky streak.

We were away for the long weekend, and our daughter Heather and her husband were minding the house and dog. Heather noticed that Noo was not very happy on Monday, leaving her food un-eaten (that’s serious!) and seeming very stiff-legged. We found this out when we rang from Campbelltown on the way home, and by the time we got home, Noo was avoiding all attempts to touch her. Instead she slunk off to the privacy of a dark corner.

We thought a tick-bite, a wasp or bee sting, or even a scrap with a rodent may have caused some of the symptoms: that or a more sinister internal problem. The main issue seemed to be her semi-lame back legs. It was too late for the vet, but one of our neighbours is an ex-vet, and she was happy to come and look at the dog.

Nothing obvious sprang to mind until the next morning when our neighbour – displaying exemplary after-care – knocked on the door with her snake bite theory. Minutes before we had discovered a lump on Noo’s muzzle, on the upper lip. Putting two and two together, we agreed it was quite possible that Noo had been bitten by a snake – probably a tiger snake.

Tiger snakes have complex and highly powerful venoms. They contain neurotoxins and necrotoxins (these can cause the kind of muscle weakness/damage Noo was exhibiting) as well as procoagulants (which can interfere with blood clotting and can cause swelling and bleeding). The toxins also cause a sensitivity to light, a possible explanation for her hiding in a dark corner. In many cases with animals internal bleeding, breathing paralysis and kidney failure can lead to death. The only good news is that tiger snakes are not very efficient at delivering their venom. They rely on grasping their prey in their mouth while the venom oozes from their backward-facing fangs rather than being injected quickly into their victim. It works particularly well on rodents and similar small prey.

But that morning Noo was quite chirpy – and our neighbour ended up calling it a “sublethal envenomation”. To the rest of us that means the bite – if snake bite it was – hadn’t killed Noo! So she’s lived to stick her snout in another day. We just hope the snake has decided to move on and stick to disposing of rodents instead of harassing serene old ladies.
Posted by Nature Scribe at 13:52

Me too, silly bitch.