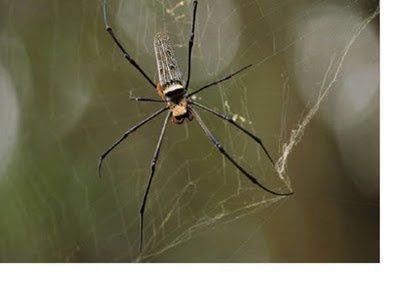 [this is NOT a huntsman spider ... but I had to start on you arachnophobiacs somewhere!]

Armitage Shanks was spitting mad. He squeezed up under the rough wooden join between the wall and the ceiling. It was not the squeezing that riled him. He loved nothing better. From the flickering gloom below him came a rattle, a thump and a mumble as the two people settled down to tea in front of the T.V. As usual, he too stared at the shimmering screen, but tonight his heart was not in it. He was fuming. "Three hours! Three scudmungling hours!" He rocked rhythmically from side to side, winding up his anger.

As he moved, the man suddenly looked his way. He froze, then squeezed further back into the shadow. He could still feel the man's fear as fresh as when, three hours before, those trembling hands had wrapped Shanks in paper and cast him out into the cold. And the woman's wild shriek that had come moments before. He felt that again too, though right now the woman was too busy stuffing large slabs of sausage into her mouth to notice him.

"Oh spittle! Why is it always me?" With one final glare over his hairy shoulder, he left the lounge-room and clambered through the ceiling towards his bedroom to nurse his anger. His bedroom was actually the toilet of this modest holiday house, but Shanks thought it particularly well appointed. It had an ample supply of insects including some juicy blow flies. It also had fine access through two huntsman-size cracks in the ceiling, not to mention the door and the window.

But all that was nothing compared with its crowning glory - the special shiny white seat from which he had taken his name. Despite his foul mood, he momentarily felt the same warm glow he always felt when he saw his name in black and white. For one thing, not every Huntsman could read as Armitage Shanks could. (He had taught himself by watching television.) But it also reminded him how distinguished his name was compared with any other spider he knew.

Of course he had great respect for the likes of his grandfather, the legendary Grandpa Grapple. And he dearly loved his Aunty Scuttle, who had brought him up almost single-legged after the Mortein Disaster that took his mother and father. Still, seeing such a distinguished name so boldly proclaimed, and knowing it to be your own, does tend to engender a certain pride.

All of this only served to deepen Shanks' anger. He was not just any spider. He was Armitage Shanks, a spider of distinction from a famous line of Benign Huntsmen. More than once he had heard the humans refer to his kind as `benign', and although he didn't actually know what it meant (a television education has its limits), he didn't feel that being shrieked at, wrapped in newspaper and tossed out into the garden, was quite it. So there Shanks sat, benign but brooding, listening to the louder than usual clatter coming from below. At last he flattened himself into an uneasy sleep.

When Shanks woke up he felt good. Surprisingly so, since his bedtime mosquito had tasted noticeably of spray. With a new spring in his step, he scuttled off towards the living room. He always liked to see what was happening down below. The moment he was within earshot of the humans he knew something was different. Squidging himself into the crack above the stove, he saw to his surprise that there were three people in the kitchen. The sight of the older woman was about to return Shanks to the bad mood of the night before, but before he could properly remember why, something far more important happened. The woman was talking to the newcomer. Even from where he was Shanks could see that this person was a child; a girl to be exact. But what made him open all his eyes wide was what he heard the child say. It came in the middle of a chat with the old woman.

"Deary me Peg, how you've grown. Let me look at you. How old are you now?" Then came the surprise. "I'll be nine in July, Nan." BENIGN! Shanks nearly spun a web on the spot. Benign...the very word which described himself, and now here was someone else who was benign. He felt an instant bond with the lumpy little girl at the kitchen bench below. As her grandmother chatted away, Peg looked casually around the unfamiliar room. Shanks was able to see her chubby freckled face, and her crooked gappy teeth. Such beauty! It was love at first sight. He hadn't known that humans could be benign, but as he stared at Peg's wide friendly face he had no more doubts.

Shanks had to try hard not to rush down there and then to greet his new-found friend. It was only the sight and sound of Peg's grandma that kept him still. He decided to give the whole situation a bit of thought. He would have to wait until he could see Peg by herself. That meant finding out which room she was in. Right, he would scuttle off through the ceiling and scout around. He was about to carry out this plan when another strange sound came from below.

Shanks turned to see a large gangly looking boy walking into the kitchen. His arms, his mouth, his hair were all stretched out in an enormous yawn. If it had been meant to scare a Huntsman, the boy couldn't have done a better job. Shanks took a quick step back.

"Morning sleepy head." His grandmother got up from the kitchen table and ruffled his hair. "What a sight!" " 'mornin' Nan," mumbled the boy, ducking away from the tousling hand to sit beside his sister at the breakfast table. In the next few minutes Shanks pieced together some more details about the new arrival. Terrence was Peg's brother, older by nearly four years. He didn't like breakfast, didn't like mornings, and didn't like being called Terrence. Worse still, he didn't seem to like Peg much either. Shanks began to think there wasn't much to like about this Terrence.

Worse news followed. It seemed that Peg and Terrence were sharing the same bedroom. Shanks' plans would have to change. There would be no chance of properly meeting his dream-girl with that brother around. So with his mood becoming gloomier by the minute, he went back to his room to suck on a wasp. Nothing cleared the mind so well.

Within the hour Shanks had a new plan. He knew that every day the humans came to his room at least four or five times. Sometimes they stayed and sat, sometimes they were in and out very quickly. He would wait until Peg came to his room for her long visit. That would be the right time for him to introduce himself.

He did not have long to wait, though it seemed it. After breakfast there was something of a procession into his room. It was often the time for long visits. As each visitor came, he anxiously crept to his usual vantage point. At one stage he felt sure he heard Peg about to enter the room, but there was a commotion at the door which resulted in Terrence pushing his way in first. And his stay seemed to be deliberately prolonged. He sat there reading something called "Woman's Day." Shanks' anger rose again. He muttered all kinds of dark threats and expletives to himself. "Sale of the Century! He'll feel my fangs on his butt if he doesn't take the money and run!"

But Terrence soon finished reading the latest about some long past royal event. With a touch of the button on Shanks' own royal throne, the thunder of water signalled the boy's departure. His odious presence was rapidly replaced by that of the beloved Peg. She came rushing into the room, bent over and cross-legged, her pants falling towards her ankles. Shanks' throat suddenly caught, overwhelmed again by the beauteous sight of the Benign Miss Peg. He cleared his throat, smoothed down his scopulae, and stepped into full view.