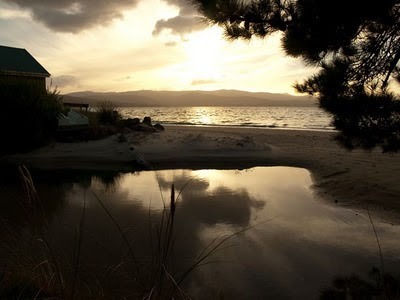 [pic: looking across the D'Entrecasteaux Channel from North Bruny Island]

[some thoughts on our experience of islands, and particularly Tasmania's Bruny Island]

Why do islands grip our hearts so? Peninsulas and promontories are all very well; seaside towns and mountain villages can be a delight. But there is something uniquely seductive about islands.

Islands fill mainlanders with an unabashed yearning for a life simpler than the one they endure, a pared-down life in which all that is elemental - sea, wind, sun, love, the last light of day, the sand beneath fingernails - is brought to the fore-front of existence.

That’s only on the surface, because both Brunies can sneak up on you, each in her or his own way. The north can turn dramatic, like a farmer who fits all the stereotypes but then takes to reading poetry and preparing fillet mignon to perfection in a romantic candle-lit dinner. And the south can be gentle and sweet, bursting with wildflowers, and weather that is full of sweetness and light.

The weather too is wild. A westerly gale hauls a load of clouds that bounce off the higher mountains to the west. This creates mountain waves, alternating bands of clear sky and cloud. The air thrums deeply. I can’t determine whether it is a frequency created by the abrasion of wind on earth or the beating of waves on the shore.

On one early visit, in the late 1980s, we stayed with friends who had borrowed a shack at Dennes Point, near the northern tip of Bruny. There are shacks and there are shacks. This peculiarly Tasmanian name for a holiday house can apply to anything from a humpy to a seaside mansion. This shack was much nearer to the former than the latter. The ceilings were sagging and stained with possum piss from the resident screeching marsupials. Stealthy legged and noisy winged wildlife also had free rein through the house, most annoyingly in the form of squadrons of mosquitoes. The beds were lumpy and in a dubious hygienic state.

Four adults and 6 children spent two hilarious nights in the shack. That at least is how we came to see it in retrospect. At the time it was a case of roll over; swat; get up; hunt mosquitoes; change a nappy; hush a child; listen to our friends’ children scream; listen to our children scream; scream a bit ourselves; and finally laugh and get up at first light.

Apart from retrospective humour, the shack bequeathed one other long-lasting treasure. From somewhere in my febrile, sleep-deprived mind, a children’s story was hatched. It was inspired by the squalid, wildlife-invaded building. That and the brand name of the shack’s toilet: Armitage Shanks. Somehow a story featuring a huntsman spider who could read and speak was formed.

20 something years later, I confess with some chagrin, the story is still not finished. But getting back to Bruny, the scene of its conception, has inspired me to post the so-far-completed chapters on this blog. Who knows, it may inspire me to finish the story. Perhaps that mosquito at 3am this morning was a sign.

sharing sea, wind, sun, love with you for over 3 decades is not long enough....
happy island memories...!!
now where is that ending to Armitage Shanks?? I have 2 decades of school students waiting for the ending!
:)
(lovely article)

I can only remember having an awesome time on Bruny Dad! (And I didn't even realise that that's where Armitage began.)

My favourite image is the farmer cooking fillet mignon. Brilliant.

I definitely agree with 惠蘋 on this one. Couldn't have said it myself. I mean... better myself.

I don't remember that shack at all, I'm afraid, Dad! I do remember the Drummonds' one - I lost a tooth in the middle of the night and woke up with it rattling around my mouth. And I brought a bucket full of sand and hermit crabs home, but Mum wouldn't let me bring it inside.

Now, since I rarely get the chance to correct speeling/grammer in the Grant family, I'm taking this opportunity to point out that it should be filet mignon.

I like islands too. But I'm a bit biased at the moment because we're suffering island-withdrawals.

You know, you're right! I paused over the filet and checked what Dad had written and followed his lead! Must learn to think for myself at some stage...

That's lovely Dada! I must confess I don't remember the shack either...tragically my only memory of Bruny involves a very stubborn donkey and a (perhaps) equally stubborn sister of mine. I say tragically, because I should remember more! It does remind me of two other moments in family-holiday-history however:

- another beautiful island (Maria) and the Cape Barren Geese chasing Stu because he got too close to their nest!

- mosquito-hunting a la Legolas and Gimli-style while walking to Lake Rhona (though I must admit I gave up counting them once I passed 100 in one day!)

Stu, you beat me to it. Me don't does grammar as good like me dad or sista but I knows me French! ;)

I think part of our love of islands comes from our love of water. Sometimes I think I could sit on a beach and watch waves ALL day. So beautiful. So powerful.