The Secret Highlands 1: Fire as Friend

When I was a child, my parents would hide our wrapped Christmas presents on top of their bedroom wardrobe. My older sister, sneekier than the rest of us, would sometimes climb up and try to guess the presents by feel. My younger sister and I would stand watch, guilty by association.*

I recalled that story as I started writing about our recent walk in Tasmania’s central highlands. Channelling my older sister, I decided only to reveal the shape and feel of our walk; the outline rather than the full destination details. Some locations are best kept secret, or at least vague. This walk is one of those, mainly because of a hut that’s found along the way.**

Our choice of destination was a last minute one. A mixed weather forecast, which started with showers and sleet in the highlands, found us heading up an unfamiliar forestry road rather than the road to Lake MacKenzie and the Blue Peaks, which had been our original choice. Tim D, on his first overnighter after serious surgery, was our guide. He and Merran had been here on a day walk just weeks before, and had marked it as one they’d like to introduce us to “some time”. Some time swiftly became now. 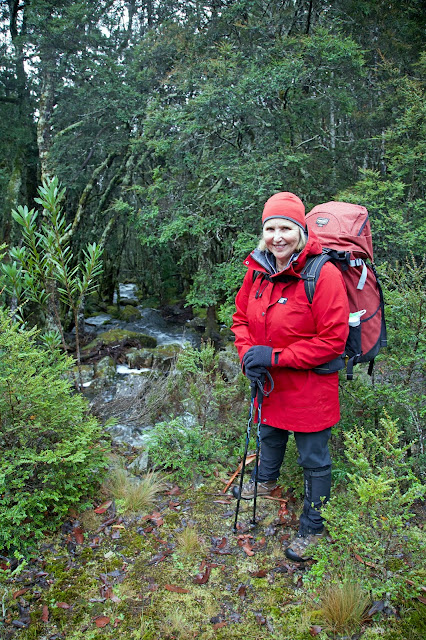 [Lynne on the way in]

The promised sleet was brief and gentle, as was the walk in to our first night’s destination. A little over an hour after leaving our cars at the end of the 4WD track, we were unpacking at the hut. We marvelled that the building was still standing, not because it was dilapidated, but because the surrounding woodland – and many thousands of hectares beyond – had been burned by the ferocious 2016 highland fires. Blackened tree trunks and green regrowth around the hut showed how close the fire had come.

While the rain and sleet had relented, inside the hut our breath was condensing, and a cold night was coming. So we wasted no time getting the hut’s open fire going. There’s quiet bliss in thawing out while a cast iron kettle hisses over flames. We were soon tucking in to tea and treats, deserved or not.

But you can’t laze happily and long by a fire that’s burning wood someone else has collected. We soon roused ourselves and did some collecting of our own. And never has the old saying “firewood heats thrice” felt truer. (“Once when gathering; again when splitting; finally when burning.”) We used an old hand saw, some rocks and plenty of elbow grease to fell, break and bludgeon the wood down to a suitable size before dragging it back to the hut.

As the fire sizzled with our hard-won wood, we set about preparing dinner. For Jim that was easy: the rest of a left-over lunch roll, made all the less appealing by his decision to go alcohol-free for this walk. Not that he didn’t look longingly at the wine we poured to go with our dinner, or at the steaming food that soon filled our plates. His versatile animal impressions: first hang-dog, then cow-eyed, were so effective that we eventually offered him some of our surplus dinner. He graciously muttered “bit spicy for me”, but scoffed it regardless.

When we’d all finished it was time to sit, and watch, and listen to the fire as it spoke its universal language. For how long have we humans blessed this amazing gift of fire? Its appeal surely goes beyond its warmth and utility. There’s something deep in our DNA, in our race memory, that speaks to us from its glow and crackle. So many generations of humans have sat as we are sitting, telling themselves stories to enrich the soul; to enhance group bonds; to try and make sense of this fragile thing we call life.

We had much to catch up on regarding Tim D’s own experience of fragility. He told us some of the details of his near miraculous survival of a cardiac arrest; his subsequent open heart surgery; and his journey back into wellness and walking. For our part we told him how mightily thankful we were to have him out here with us again.

* Postscript 1: Did my sister ever guess a Christmas present correctly? I can only recall one: the year she got a pogo stick!

** Postscript 2: While the hut is not private, and remains unlocked, it is both fragile and historic. I’ve chosen to be discreet about its identity and location.