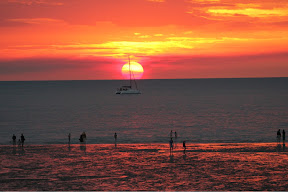 Now I know how the piano felt. More than three decades ago we moved from central west NSW to Tasmania, taking ourselves, our dog and our piano from weeks of 40 degree dry heat to the single digit summer moistness of Fern Tree. There in Hobart's highest mountainside suburb, the piano suffered such climate shock that only a piano tuner could put it right.

There is no tuner to greet us as we step out of the plane into Darwin's blue, smoke-tinged heat. Just hours before we'd been in a Hobart lashed by storm-force winds, with snow imminent. Even though it's the dry season, the drive from the airport still shouts to us that we're in the tropics. Banyan trees, frangipani, hibiscus, palms - a veritable hosanna of herbiage. 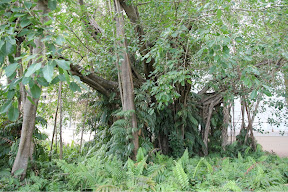 I search for an appropriate term to describe my sense of dislocation. Climate shock isn't enough because it's about a lot more than climate. Nor is it quite culture shock, although there are elements of that. There is a whole suite of subtle and not-so-subtle differences: temperature, humidity, smells, sounds, light, flora, fauna, the plain look of the place.

The Greek word for place is topos (hence "topography" etc). But somehow topo-shock doesn't trip off the tongue. Whatever it is, there is nothing like immersion in a new place to help cure the dis-ease. The call of a figbird, both unfamiliar and enchanting, lures me into birdwatching. Right in central Darwin, in a vast banyan tree, figbirds are calling each other with their loud, slightly descending chiew. 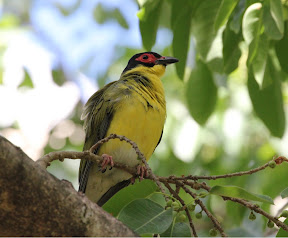 Figbirds eat what you would expect them to eat, given their name. And the banyan, being in the Ficus genus, is full of figs. But the birds are not just feeding in the city, they are nesting here too. They weave large cup-shaped nests out of banyan leaves, vines and twigs. Some of these are visible from the street, as are the vibrantly-coloured male birds. We watch long enough for me to photograph both bird and nest, all the while feeling the enchantment of their bright calls in this unlikely setting.

Changes in latitudes, changes in attitudes, as Jimmy Buffett sang in the 70s.

I have a rule of thumb: you can tell the ambient temperature of a place by running the cold tap for thirty seconds and then drinking from it. Darwin water isn't quite body temperature, but it's not that far off it. Better perhaps for swimming in than drinking, immersing rather than imbibing.

Other differences bring a wry smile. While al fresco dining is pretty much universal throughout Australia, the paraphernalia needed to make it more comfortable is a little different here. We have an outdoor lunch at an Irish pub (some things are universal) and notice that where overhead gas heaters would be in Hobart - and much of southern Australia - in Darwin there are overhead fans.

On Sunday night we head for Mindil Market, an outdoor market behind the dunes of Mindil Beach. The place thrums: it seems half of Darwin is here. But around 6:20 pm the market goes quiet, the buskers lay down their instruments. In a scene reminiscent of Time Machine - minus the siren sounding - everyone suddenly walks onto the beach.

The beach faces the Arafura Sea, and the sun is lowering towards it. It's been overcast most of the afternoon, but the sun is about to break out into a wedge of clearer sky just above the western horizon. Hundreds and hundreds of people are lined up along the beach, sitting, standing, eating, chatting, testing cameras, commenting on the sky. The dry is burn-off season in the Top End, and the sunset colours are richly enhanced. 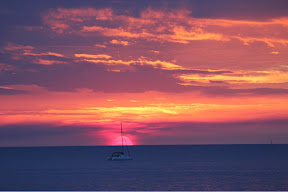 At about 6:35 the sun eases itself below the horizon. People spontaneously clap, some even cheer. Everyone seems to be smiling, confiding their feelings to strangers. Darwin has its party scene, its crocodile shows, even its casino. But night after night crowds like this turn up to see what is obviously the best show in town.


- Posted using BlogPress from my iPad

I'm a Taswegian by birth, now in northern NSW, but lived many years in Melbourne and visited Darwin and other parts of the Top End from there. I remember that feeling, like going into an environment completely different from anything else I'd known.

After that, I returned as often as I could. Last time I went was in the eighties. I loved the place, and your post takes me back for a lovely wallow in memories. Thank you!