On a River of Words

Apparently there is no official collective noun for a group of writers. Among those proposed, I’m rather taken with a block of writers. Apart from its delightful play on words, it proves perfectly suited to that sub-set of writers I find myself amongst. A bush-block of nature writers sounds pretty well perfect to me.
That said, I’m not sure the word will die of over-use. Writers are more lone wolves than herd animals. Most of our work is done alone and in our heads, which at times can be filled with our howls. That’s all the more reason to get out and enjoy the occasional gathering of writers, such as last weekend’s workshop in Tasmania’s Mount Field National Park.
Under the guidance of visiting US writer and ecologist, Dr Robert Michael (Bob) Pyle, twenty-something Tasmanian nature writers really did go bush to work on the craft of nature writing. Dr Pyle, who is based in Washington State, is both a world-renowned butterfly expert, and a prolific, award-winning nature writer.
Water, in all its forms, seemed a thematic thread for the day. Outside we heard it, felt it, smelled it, tasted it, saw its effects in the forest all around. Inside we reflected – itself a water-inspired metaphor – on what we were experiencing.
Using “river of words” exchanges, Bob Pyle got us writing and sharing, initially through brief exercises, later through more complex challenges.
He reminded us that while a reporter reflects, a poet refracts. As a trained ecologist Pyle is used to accurate and factual reportage. Many of his works are scientific guides. And he quotes fellow lepidopterist – and famous novelist – Vladimir Nabokov, on our obligation to “attend to the individuating details”.
But that attention to particularity, for the nature writer, leads on to a strong identification with place: what Pyle calls a “rooted companionship with homeground” (borrowing from Oregon poet Kim Stafford). In turn that leads to a sense of obligation to connect with the audience about that experience of place, something which can only be refracted through the individual personality of the writer.
I would risk summing it up like this:  Give me the facts by all means, but also let me hear just a little of that howl in your head.
It’s not something everyone can pull off, but you know it’s worked when you read it, or hear it read. I wish I’d written down Bob Pyle’s words inspired by his first sighting of a platypus. It happened during the workshop, while we were walking beside Russell Falls Creek. From memory he rejoiced in the platypus’s oneness with the flow, as it disappeared downstream after his “nano-sighting”.
Perhaps this longer quote from “Wintergreen”, a book of his essays (published by Sasquatch Books), will reveal more of his style. As something of an arachnophobe, he writes this about spiders.
Spiders, as one learns, enhance one’s life even if one is not an arachnologist. Of course they consume flies and other bothersome insects in large numbers; but consider their beauties too – such as the crosslike pattern on the backs of the big female orb weavers so common hereabouts. Need so much as a word be written about the beauty of webs in the morning, in a misty place so generously hung about with them? Their short-lived lambency so perfectly reflects the nature of light and substance in a land where the distance from dead gray to brilliant silver is an angstrom or less, where form and formlessness mingle intermittently in the mist. 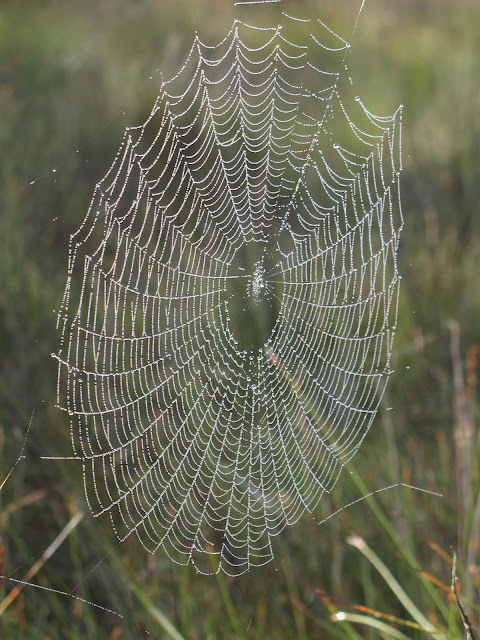 I grow more and more appreciative of spiders’ ability to disperse when I watch the rain of gossamer in summer; exodus of spiderlings ballooning wherever the breeze should take them.
[My thanks to the Tasmanian Writers Centre for organising the workshop, and to the Parks and Wildlife Service for hosting it. And special thanks to Bob Pyle for his inspiration and guidance.]
Posted by Nature Scribe at 16:42