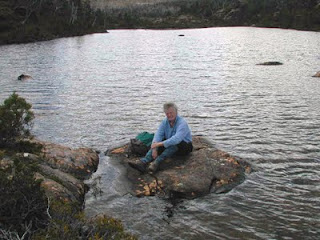 [Roger Deakin in The Labyrinth, Tasmania - prior to an obligatory swim!]

While Roger Deakin was a staunch parochialist, and a champion of the particular, the ripples of his life and death will nonetheless reach far beyond Suffolk and England. As they have reached me here in Tasmania, Australia's wild island, the former van Diemen's Land of convict infamy. It was here that I met Roger while he was researching "Wildwood". Tasmania fascinated him both as a place where apples are synonymous with the island - many still call it "the Apple Isle" - and as a place where wild forests are under dire threat from human action.

I took Roger into the wilds of the Tasmanian highlands, to a place called Pine Valley. It was wonderful to share this special wild place with someone so passionate about and attuned to the natural world. I recall his sense of wonder as we walked out of typical Australian eucalypt forest into an altogether more ancient forest. "Like walking through a door into old Gondwana" I explained as we exulted in the mossy green darkness of a rare coniferous rainforest whose nearest relations are in Patagonia and Fiordland. After we reached the basic hut that was to be our base for the next few days, Roger made it his duty to keep the coal-fired stove alight. He excelled to the extent that the little iron stove glowed red-hot, and fellow lodgers had to peel layers or exit sleeping bags to prevent overheating.

The next day we went higher into the mountains, to the lake-studded 1400m high plateau known as The Labyrinth. There we ambled between tarns, at one stage sitting at a viewing point high above some of the remotest wilderness in Tasmania. Our 360 degree view took in everything for many miles around. Yet there was not one single road; no cleared land; no man-made structures; no smoke, town, city or building: nothing but wild lands for mile after mile. He was amazed that such wildness still existed in the "civilized" world. I sensed he may have even struggled with the concept that the management of this place has as much to do with leaving it be as it does with "improving" it. That English urge came out in his occasional farmerly suggestions about track maintenance or tree pruning. We had a good natured debate about that human desire to intervene in nature.

But what a privilege for me, as a then unpublished nature writer, to have had such a companion for 3 uninterrupted days. Roger spoke wisely and helpfully about writing, and encouragingly about my efforts at it. His enthusiasm and generosity continued as we kept in touch via email. He provided me with some wonderful suggestions in the nature writing field, and in turn took up a few suggestions I passed his way. As a huge fan of "Waterlog" - a book I had read before I knew Roger - it is his final watery exploits in Tasmania that will remain in my memory. On a cool spring day, with melting snow still lying around on The Labyrinth, Roger couldn't resist the urge to plunge into one of the highland tarns and swim an icy lap. He emerged grinning, refreshed and ready for more mischief. So at the end of our walk, as we waited for the ferry to return us to our car, he repeated the dose in beautiful Lake St Clair. Although we were at a much lower altitude, the lake is Australia's deepest, and it can scarcely have been any warmer. (And for the record, at the former he was informal, at the latter he wore his swimming suit!)

Later, as the ferry brought us into the jetty, I pointed out a snow-clad peak named Mt Rufus. Roger's eyes lit up, and he asked if I could take a photograph of it in honour of his son Rufus. That tiny glimpse of fatherly tenderness made me esteem even more a man, a writer and an activist about whom there was already so much to admire. And now I will return to Roger's work with a sorrow-tinged enthusiasm, just as I will join the queue of those longing to read his last book as soon as it is published.

[PS - "Wildwood" and "Notes from Walnut Farm" were both published after Roger's death, and are currently available. His previous book "Waterlog" is also still available.]

Thank you! Having read Waterlogged it is particularly significant that you describe two of Roger's swims in Tasmania's icy lakes. I wonder if he found their water as thinnly cold as I always imagine them? Was this piece published somehwere?