[some fiction for a change. Part of an old, unfinished story, I wrote this episode following a particularly vivid dream.] 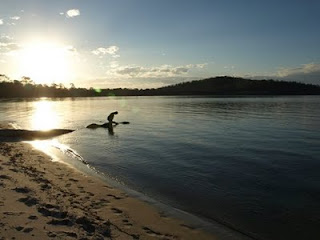 None of it had gone the way Siobhan thought it would. Typically she'd argued with her mother just before they'd arrived. She couldn't even remember what about, just the muffled feeling, as real as hands around her throat. "Until you show you're old enough ..." She'd wanted to scream. Even now she wanted to run away, but the whole family was already on the run. And short of stealing a boat, she had no way of escaping.

So the introductions hadn't gone well. In fact Siobhan had to admit she'd been a little pig ... maybe even a big one. It hadn't helped that she didn't precisely know why they'd come here. She only knew that these people were some kind of secret religious community, and that her father had visited here before the Trouble. "These are God's people Siobhan. People of the Spirit" he'd said, putting on that earnest "spiritual" tone he used from the pulpit. It was tainted with a faint American inflexion, as if "Gard" lived in Kansas when off-duty.

She supposed her behaviour would be the topic of more conversation among the islanders, and probably earnest prayer too. When she'd said as much to her mother the reply had been a surprisingly tart "Grow up!", and her mother had stomped off. Siobhan knew that the usual form in their family demanded an apology. When she chose not to, she fell into an unwelcome hole of isolation and insecurity. Even some attention from her brother Sam would have been welcome. But he knew the form too. Coventry was not open to visitors.

It was an island girl who offered the way out. For the whole time she'd been there Siobhan had tried to ignore all the islanders' excited talk about some ritual they were having soon. But when Ginny-Waruppi directly asked her to come, she was relieved to have an excuse. Ginny was about her own age - a "tweenager" as her father called her ad nauseum. She had tightly-curled brownhair a shade darker than her skin, and prominent teeth. She also had a reticent manner and a very faint voice, though this might have just been caution in the face of Siobhan's notoriety. In a silence broken only by the swish of the grass and the swash of the sea, Ginny led her along a grassy track away from the town and towards a stand of twisted gums. Others too were coming from various directions to the same spot.

The clearing was in a swale about fifty metres from the ocean beach. It had a sandy floor mostly clear of grass, and a large central fire-pit surrounded by ridges of blackened shells and bones. Into this area were crammed dozens of people, all standing, all half-looking at Siobhan. For the first time she noticed that it was only women. The men, even her father and Sam, were apparently not allowed. Siobhan swallowed, and looked around for her mother. She was standing nearby, among a group of women outside the central circle. Siobhan sought reassurance, but her mother's face remained set. She made only a slight motion towards the women with her head. Watch ... listen.

Siobhan turned away quickly, feeling a tremble on her bottom lip, and a cold-water tightness in her stomach. She tried to rekindle anger with her mother - anger was easier than tears - but she couldn't cope with it today. It felt too much like betrayal. She recalled that time when, as a little school girl, she'd thrown away the lunch her mother had made. When her mum had asked her how she'd liked her sandwich, she'd lied about it. But the sick feeling of betrayal had put her off her favourite tea that night. And after that she'd eaten every sandwich her mother ever gave her, stale vegemite and soggy tomato alike, all to avoid hurting her mother. Or was it to avoid her own unpleasant feelings - the feeling of being a traitor? It was a new thought, a dangerous thought, that she was somehow responsible for her own feelings.It was easier to think that you just reacted to what other people said and did.

The island women were standing in a loose multicoloured knot, their cardigans, jumpers, coats hugged around their swaying bodies as they talked. After a time she noticed that their voices were rising and falling rhythmically, almost in a chant. One voice would lead out, the others would follow, then three or four might recite something together, and the single voice - mostly that of Mother Maisie - would take the thought back to the group. It was, Siobhan realised, a sung debate.

She could make nothing of their dialect, but the snatched glances of one or two of the younger women told her that she was the subject of contention. As the last of the singing died away in the dewy evening air, Siobhan shuddered. Something had been decided. It was Mother Maisie who eventually broke away from the group and rode their eyes towards the two white women. She was smiling a gentle smile, looking steadily into the younger one's eyes. Her old eyes were wet with tears.

The details of the evening ceremony blurred in Siobhan's memory when she later tried to recall them. But the central event itself remained stark. There had been talk, a kind of briefing she supposed, but it had meant nothing. She had been too frightened to hear, too fearful to ask anything. There was singing again, this time in a more formal circle.

Ginny-Waruppi had taken up the guitar. She'd strummed inexpertly, but it was enough to signal the others to start another slower chant. At first it was faultingly sung, as though half-forgotten. As it traced its circular pattern back to the start, the singing became fuller, though hardly louder. Then Siobhan began to notice more complexities in what she had thought was just a simple chant. Despite herself she took one part into her mind, weaving it in and out of the central theme. Its simple beauty was so affecting that she almost forgot her fear, until Mother Maisie abruptly raised her voice in a high wail.

It unquestionably signalled the end of the song. At the same time the big elder moved forward and took Siobhan firmly by the shoulders. She stiffened as she was drawn into the centre of the ring. There Maisie gave her a tight formal embrace. As she was released Siobhan wobbled, spreading her feet in the sandy dirt to keep from falling. When she looked up, Maisie was standing toe to toe with her. She realised they were the same height, though any comparison ended there. There was no time to think. From somewhere the large woman produced a coat, which she began draping over Siobhan's shoulders, lifting her arms to put them inside those of the coat. It was ridiculously big for her, until Maisie slid her own arms inside the same sleeve, left arm to right arm, right arm to left arm. More distracting was the sensation of being forced against the woman's vast bosom.

As someone drew the coat around the two of them, and buttoned it tightly behind the older woman, her own tiny breasts were lost in Mother Maisie's. Siobhan felt her ears burn with embarrassment, also felt the warm not-unpleasant breath of Maisie, and heard the beginnings of a new chant. She didn't know where to look. The tight swaddling gave her little choice. She couldn't turn to see her own mother, who must have been somewhere behind her. When she finally gave in and looked at the eyes that were barely a handspan away, she suddenly stopped feeling embarrassed.

The eyes were the deepest brown, so dark that there was little distinction between pupil and iris. More than that the eyes were full of compassion. There was great strength and great sorrow in those eyes, enough to cower any girl. But instead they showed an understanding of this girl, as if they had seen all that Siobhan had seen, and much more besides. As they stood thus, Mother Maisie clasped hands with Siobhan, lacing their fingers together as if in a final act of union. The girl no longer wanted to lookaway, certainly not out of bashfulness. But a heavy-lidded weariness came over her, and she found the song drifting her into a trance. Pictures began to form in her mind, as vivid and tangy as salt spray, but despite all effort, her eyes fell shut.

The chanting song is diminishing. There are stronger impressions. She is young and barefoot. It is summer, she is at the beach, surrounded by black children, though there seems nothing remarkable about that. Nothing remarkable about her own skin being black either. Only for an instant does she feel a variance in the way her heart beats; the texture of what her eyes see and her hands touch.

The scene changes. It is dark, inside a hut. She is being told about something important by someone she loves, though she can see no face. She feels something warm running down one leg, hears some gentle old laughter, some sharp words to a male enquiry. She realises she is having her first bleed. Again there is a change. The loved voices are gone. In the distance loud noises, the sound of fire, wailing. Then silence. She is crying, then turning to find a white man standing over her. She has never seen such a look in anyone's eyes. He laughs like ice. There is a gun slung over his back. He points to it, grinning, then falls onto her.

There is more weeping, long unconsoled weeping. Then finally more warm voices, more love - though the special voices are gone, silenced. All but the oldest one, which now whispers what it can. About the time, when it comes. About the pain. O the pain. The swelling rhythmical fanfare of the awaited one. Which comes through the pain with its own lusty blare. She rests, then feeds, feeling the tiny mouth tug at her nipple. She smiles palely at the unwanted but loved child, drifts into the sleep of exhaustion. When she turns to seek him again, he is gone. Her breasts fill as her heart bursts. No weeping is enough.

But then he comes. The one whose love gives her back her heart. He who is the first and last to kiss her. A drunken rascal too many times, but gentle always. He kisses her now just like the first time, and she feels warm in secret places.

The gentle sounds of the midnight sea woke Siobhan. Wherever she was, whatever had happened to her, felt like a dream. But it had been more. Remembering that much, Siobhan turned over, moaning as if in expectation of more pain. Instead her hair was stroked, and she was being gathered up like a little child, and pulled alongside her mother, who was hugging her with protective ferocity. There was no talk, just the wordless crooning and comforting she had once known. When she was a girl.

Thank you for sharing this amazing story. It is beautifully written and amazingly sensitive to the experiences of being both a girl and a woman.