Gingerly. That’s how three of us mounted our bikes the next morning. One of us didn’t even get that far. Liz had suffered during the night, her leg muscles cramping badly.

But we had a plan. Firstly her bike needed upgrading, as its sticking gears were the main cause of her problems. A call to the bike hire place resulted in a bike swap. But the bonus was that they would also give Liz a lift to Sevenhill, saving her the morning’s uphill climb. We would meet her in the small town of Sevenhill for morning coffee.

By the time we’d pedalled up the hill, we’d hardly earned that refreshment break. But we didn’t let that stop us having a long and relaxing break. When all four of us resumed riding, we were pleased to see that Liz’s bike change had made a difference. We rode back up to the trail, and straight across it to the Sevenhill winery.

Lynne and I had visited this place in the late 1970s, and all I remembered was that it was run by members of the Jesuit order. As we rode up the beautifully cared for grounds of the old winery, nothing looked familiar except the imposing sandstone chapel.

The Jesuits (aka The Society of Jesus) have always fascinated me. The order was founded by St Ignatius of Loyola in 1540. He was anything but a plaster saint. Born into a well-to-do family in the Basque region of Spain, he grew into a strutting and somewhat vain nobleman. He turned to soldiering for the glory it might give him. After being severely wounded he had a religious conversion, and decided to be a “hero” in the style of St Francis of Assisi, devoting his life to helping others. He eventually developed the “Spiritual Exercises”, a compilation of meditations, prayers, and contemplative practices. They are still used by millions nearly five centuries later. 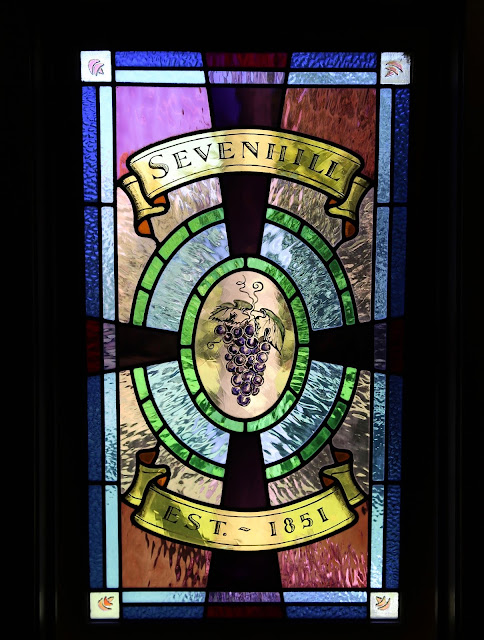 Jesuit intellectual rigour, and their habit of remaining involved in everyday life, also appealed to me. The mayhem of the cellar-door – with people standing literally three or four deep for wine tastings and sales – was somehow off-set by the knowledge that proceeds from sales funded Jesuit charitable work in Australia and Asia.


Having “contributed” generously to their work, we rode on. We were already a little late for our lunch at O’Leary Walker Wines. But hurrying seemed wrong somehow, on this beautifully fine day, with nothing but a few strands of cirrus cloud to off-set the brilliantly blue sky. Even better: after Penwortham it was also mostly downhill.

If we were late for lunch, the folk at O’Leary Walker didn’t seem in the least perturbed. They showed us to an outside table, and supplied us with some welcome cold water. And then some sumptuous tasting plates, with wine of course. The expansive views across rolling hills covered in a patchwork of autumn-tinged vines completed the picture.

The shadows were already lengthening by the time we took to our bikes for the final push on to Auburn. That was less than 5km, and with our bodies now tuned to the bikes, it took no time at all.

We’d called the bike man, and he just beat us back to our hotel for the bike collection. We’d made it: Auburn to Clare and back, via quite a few by-ways, and rather more vineyards. That left tomorrow for a bit more exploration of the valley by car. There were still plenty of places we hadn’t been to, and I guess you could say we’d developed a bit of a taste for the wonderful Clare Valley. Cheers!