The Last Time I Walked Nuala

We see it as a vast void, the divide between the wild and the civilised. A dog reminds us that, in this at least, we see poorly.

When exactly the “familiar” became accurate for Canis lupus familiaris, the domestic dog, is not a matter of precise history. But the wolf (lupus) part of its scientific name is a clear pointer to its wild origins. Domesticated though it is, watch a dog eat and you’ll find yourself in the presence of a latent hunter, scavenger and opportunist.

The last time I walked our dog Nuala, she felt like anything but a wild creature. As per usual I would cross that scant divide between our backyard and the bush. Just a few rough, rooty steps beyond our rickety fence is the bush. It has been a path of pleasure for Nuala (“Noo”) for the best part of her 16 years. Despite declining health, she seemed to return to full strength as soon as we went bush. Nose to the ground, eyes scanning, tongue lolling, legs-a-trot: she was made for this.

But last week’s walk was different. Limping and hesitant, she resisted the gentle pull on the lead as I urged her up the slope into the bush. With a little cajoling I got her up to the flat track. I took off her lead, usually a signal for her to run free, and Lynne and I began walking along the track. Noo could only manage to limp behind us, stopping to half-heartedly sniff something, before limping a little further.

We got about thirty metres or so up the track, and had to turn and wait. For years this has been her – and our – fitness track. We could walk hard uphill, fast along the level track, more usually both, until we were all well stretched. She, of course, would run twice the distance, just for the sheer joy of it.

This time as we hesitated, Noo read it as a signal that the walk was over. She sat down to wait for us, breathing hard and looking uncomfortable. We took the hint, and escorted her back inside. That night she didn’t eat her dinner. During the night we heard her variously padding about the house, lapping her water, or lying down panting. After a few days of this, with little or no food staying down, it was time to see the vet. Deep down we knew it would probably be Noo’s terminal visit.

The vet was patient, thorough, and open to all possibilities. We gabbled a little, half delaying, half reminiscing. Our youngest daughter happened to be with us, the same one who had helped me choose Noo from a litter all those years ago. The three of us knew really what was best. Medically heroic measures might buy the dog a few weeks, but at the cost of trauma on her side. She had never been happy staying in hospital.

I made the call – though we all agreed – that we would end Noo’s suffering there and then. The vet gave us a little while to hug the dog, and each other, and to say our farewells. It’s strange how at such times laughter and tears both come easily. Stranger still to be there at the end of a life, and even to be part of the process.

Noo was essentially put to sleep with an intravenous overdose of anaesthetic, while six hands stroked and petted her. She breathed a few heavy breaths, and then she was gone. 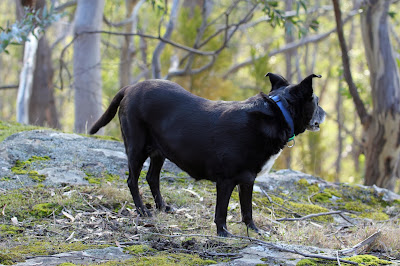 In life Noo helped to shrink the gap between the wild and the civilised for me. My pup-in-wolf’s-clothing, she helped me to glimpse my own creatureliness and to see our bush and the wider world from a more connected frame.