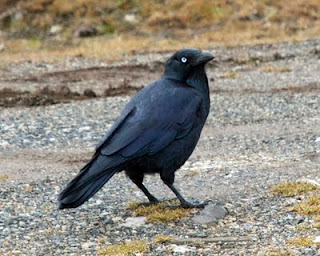 ‘”Nevermore”, quoth the raven’ - Edgar Allen Poe
Why do corvids get such mixed reviews across so many cultures? What have crows, ravens, rooks, jackdaws, jays and their clan done to deserve our generally negative view of them? Words might have something to do with it. Perhaps colour too.


Words first. When extremely hungry, you’re said to be ravenous, and are likely to gobble your food greedily. Just like a raven? Well, no. The word ravenous has its origins in the Latin word rapina (whence words like rape, with its implications of preying upon and plundering).


The bird word, raven, has an entirely different etymology, going right back to the Old High German word hraban. Any guilt about its greedy or plundering ways is surely guilt by association.


But then colour is added to that prejudice. In ancient folklore, from Hebrew to Roman to Australian Aboriginal, the crow was originally white. It was only made black as punishment. An example is the story of Wakarla the crow, from the Adnymathanha people of South Australia’s Flinders Ranges. Because of the crow’s lack of respect for his elders, Wildu the eagle punishes Wakarla by turning him black using smoke.


Urrakurli the magpie, not quite as culpable as Wakarla, is only half-punished, ending up black and white. For the Adnymathanha these tales contain moral lessons that are reinforced every time they see these ubiquitous birds. And clearly they’re not alone in associating ill omen and evil cunning with these black birds.


However it’s not all bad press. A few years ago I spent time in Alaska and became familiar with the northern raven, Corvus corax. Its guttural croak, half a register higher than Australia’s ravens, is one of the signature sounds of Sitka. The raven features positively on totem poles and in local Tlingit legend, according to which the raven not only brought daylight to the people, but also taught them how to speak.


Having spoken with Tlingit people, I would back up Sitka writer Carolyn Servid’s observation*:

Listen to Tlingit language being spoken and it’s not hard to understand the legend.
I’ve not heard any similar legend among Aboriginal Australians, but given our broad, nasal, laconic manner of speech, I’m tempted to believe we learned it from crows and ravens! Not that we should equate the corvid’s yokel Aussie drawl with a lack of intelligence. These birds are emphatically NOT drongos (even if the bird of that name happens to be a corvid.) Rather studies of crows and ravens have shown them to be quick learners, innovators in fact.


The New Caledonian crow, Corvus moneduloides, for instance, has been observed fashioning and using tools. You can see an amazing example on this YouTube clip


Despite their brain power, ravens are not invulnerable. As a frequent visitor to New Zealand, I was surprised by the apparent absence of corvids there. I discovered that there had once been a New Zealand raven, Corvus antipodum. When the Polynesian ancestors of Māori arrived, they introduced Pacific rats (kiore). These voracious rodents ate raven eggs and chicks, and humans also hunted the adult birds.


Astonishingly, given how smart and adaptable ravens are, they were extinct before the first Europeans visited Aotearoa. It's an all-too-familiar story for New Zealand birds, which evolved in the absence of predatory mammals.


Back in Tasmania, forest ravens, Corvus tasmanicus, are one of the most commonly seen birds. Bands of sub-adult ravens, seemingly fully grown, sometimes congregate in the trees around our house. Up to forty birds hold the equivalent of teen “raves”. Their loud – some would say lascivious – kaark-aaarrrk  calls multiply and echo through the bush.


This morning a plump individual alights on a bare branch near our deck. It exudes health, its feathers glossy like black silk shot with deep purple. Its legs appear a little lighter, hooped like stockings. The raven is not much under 60cm long, and maybe 700g in weight. I look into its knowing eye, and wonder. Given the healthy appetite of just one bird, and its capacity to clean up whatever it can find, what would forty or fifty of these birds demolish?


Perhaps there's another way to think about it. Without these intelligent and resourceful scavengers, how different would our bush appear?

Some interesting connections here, Dad. Thank you. I seem to remember you sitting down at Dove Lake one day to write a poem about the raven. Did you post that on the blog?

That was 11 years ago Sal! You've got a good memory (except that it was about a currawong rather than a raven).

It was during the Howard era, when there was yet another enquiry into "black deaths in custody", and the PM was refusing to offer an apology to the "stolen generation".


The Eye of the Currawong

Is this the eye of the tiger
that burns bright from your coal-black head?
One golden eye staring so hard
I am scanned, transparent.
This is no beggar’s eye,
yet I can barely restrain myself
from seeking some morsel to offer.

But then your head turns full towards me
and both eyes look down your prodigious beak
a sharper black than your feathers,
and your nobility grows yet further.
You are warily imperious - perhaps it is race memory
of the four and twenty of your kind
who gave more than they received.

Or do you think of some fouler death
In some wingless cage of custody?
Ah Brother Currawong -
brave caroler of the Tasmanian highlands,
festive your call whatever the season -
For this our estrangement
I would say, simply, I am sorry.

Good post, excellent pix, and lovely poem.
Thank God, if I may, for blogs - last threads across the planet.