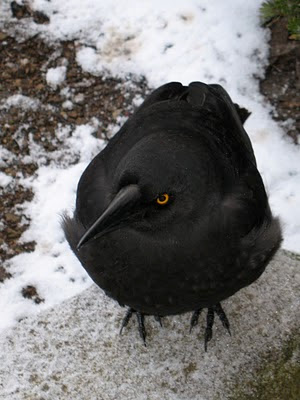 [A currawong: artist as well as songbird?]
Sound, no longer defined
by our hearing. As though the tone
that encircles us
were space itself expanding.
- Rainer Maria Rilke
I sometimes see bird song. Rilke, and artists such as John Wolseley, have helped me think I’m not completely bonkers.
Rilke’s poem is about the sound of a bell, but the principle would seem to hold for birdsong too. Somehow sound can take visual shape – can paint, sculpt or otherwise craft – an image that is not just mental. That seems to also be part of what Wolseley’s visual interpretations of birdsong are about. For an exhibition of his bird paintings he writes:
I have been intrigued by how often my drawings do in fact have the appearance of musical notations. The black lines and rhythmic dots made by hitting and dragging the paper against re-bounding twigs and branches often look like a musical score.
I began to realize that some of these marks have a correspondence with sonagrams or graphic representations of bird song. Not just any bird song but that of the Gilbert's Whistler or the Hooded Robin which were singing in the very trees I was moving through. It was as if the song and the carbon marks of those trees were both an expression of the energy fields of that particular habitat.
- from www.johnwolseley.net

Wolseley’s work prompts me to think that writers too might do more in describing birdsong than offer a straight transliteration. Apart from anything else, this method doesn’t always succeed. I once fell foul of a mother for describing the call of a yellow wattlebird as “like strangled vomit”. She told me in no uncertain terms that her young child’s tender ears were offended by such a vulgar description. 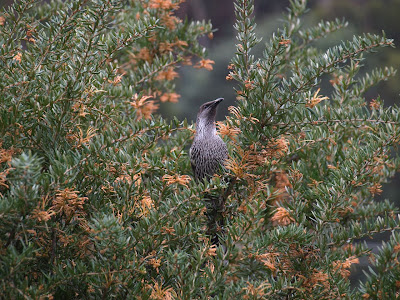 [a little wattlebird, whose call is described by Simpson and Day as "harsh cackles"]
So in what sense can anyone see birdsong? I can only answer personally, but to me the voice of a single forest raven casually tears the sky, leaving slender, ragged black gaps. But when I hear a large group of them, perhaps fifty as I did last week, it’s as though they’re shredding the sky.
I’ve read that Jackson Pollock worked with other artists in his drip-style creations, including the famous Blue Poles. In my forest the communal ravens are Pollock in reverse, stripping rather than dripping, scratching hundreds of scrawny black holes in the heavens.
Blackbirds, by contrast, seem to embroider the dawn, their calls now thin and linear, now round and flowing. Their melodic intricacy adds delicate weight to the growing glow of the sky, as perfect and welcoming a way to wake as anything, short of a lover’s embrace. I for one can forgive them their feral status in return for that song.
I see other calls too: green rosellas drape their calls across the sky; clinking currawongs scissor and shear; lapwings stiletto; native-hens rasp and saw; pardalotes nip and tuck.
There are liquid visions too. Pied butcherbirds lay a flouncing, fluid layer across the sky; magpies drop globules that ripple deliciously through the heart and onwards to the horizon.
And there is so much else to see and to say, even if all attempts to convey the full feel of birdsong are vain. They are vain in the same way that transliterations are; and they fail just as impressionist painters fail; just as all art, all music, all words fall short of lassooing the wonder of life.
And what a wonderful part of life birdsong is. O Lord protect me from ever being deaf – or blind – to these befeathered angels, these celestial impressionists!
Posted by Nature Scribe at 12:13

Peter -- this is wonderful! But hearing and seeing all these birdsongs has made me terribly homesick for Tasmania ... Maureen

Likewise! Made me very glad I'll be living there again soon.

Thank you Peter, for these lovely musings on birdsong and perceptions....

I often 'picture' birdsongs myself (this is where mild synaesthesia comes into play), and the nicknames my husband and I make up for our local birds often reflect the depth of enjoyment of such personal interactions.

As I mentioned to you today at the IA syposium, I was touched by your rich descriptions of the ways in which we might learn more as interpreters. I really enjoy languange and contemplation of the world around us, so I'm looking forward to reading more of your blog ...

Thank you for reminding me to seek stillness, so that I may learn to really listen!